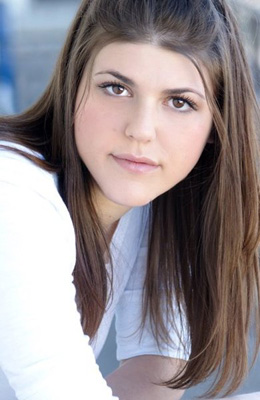 MTV’s Awkward. captured my heart from the first episode. The story is about Jenna, a high school wallflower who is suddenly thrust into the spotlight when an accident is incorrectly revealed as a suicide attempt. Jenna becomes “that girl” – and learns that it’s now her turn to define who she is, instead of being defined by one moment.

Jenna’s nemesis is the bitchy head cheerleader Sadie Saxton. Molly Tarlov plays Sadie as such a real, relatable character that she goes beyond the stereotypical mean girl. Sadie is wickedly brilliant and the writers, and Tarlov, draw her with such complexity that she’s quickly become a fan favorite.

I have to ask you about Sadie’s perfectly bitchy “You’re welcome” retort. Did your delivery of it come off like initially or did you try to figure out the best way to consistently deliver that in the best snarky way possible?

It’s a funny story. We were in the writers’ room — they had just started writing, and we were talking about what was going to happen this season. They were telling me all these horrible things that Sadie was going do, and I said, “Oh my god Sadie is so mean!” Then Lauren [Iungerich, show creator and Executive Producer] said, “Yeah, but your dad built the planetarium,” and I said, “You’re welcome.” They were like “oh my god.”

And that’s how it was born and it just came out like that and there it is.

What surprised you the most about the reaction to the show?

I guess what’s surprising is that there’s so much great television and that now it’s so hard [to be noticed]. I always think about [when Boy Meets World was on] and you talked about Cory and Topanga and everybody knew what we were talking about. [Everyone watched] the same shows and it’s just not like that anymore.

I mean everyone lives in their own TV world, and there’s so many shows and so many networks. I’m so thankful that we caught on.

How did you find out that you guys were picked up for the second season as well?

I was taking a nap. My Twitter started going off and somebody tweeted “Congratulations on the second season — You’re Welcome.”

I called Jillian [Rose Reed, who plays Tamara] and said “What’s going on?” We Googled [the show] and saw all these quotes [about us being renewed.] I was at my apartment and she was at lunch with her mom and we were just like so excited.

It’s an amazing show. I think that Lauren has magic in her brain.

You talk to a lot of your fans through Twitter. What is that like, especially with this being your first big role?

It’s awesome. I am so excited. I really cannot even get over the fact that I can tweet a question and get responses. These adorable girls sent me a video the other day, and it was so cute — I sent them a video back. I showed it to my dad yesterday, and he was just like in shock that somebody actually wanted me to video them back.

What the best reaction you’ve gotten from a fan that recognized you?

Well, I really like when people call me pretty. (laughs) The other day, a little girl said, “Sadie is a quite a character!” That was one way to put it!

The first time that I got recognized, [they asked] “Can I take a picture of you? My girlfriend doesn’t believe you’re here.” That was so weird — I wasn’t wearing makeup and I just got a facial. [Then he asked,] “Can you make a mean face?” I said no.

What’s pretty cool is at the [2011 MTV VMAs] — all of a sudden the fans were yelling down for Sadie.

You said that it is very important to find great role models — who are your role models? And you may not realize how important you are, but you have become such a role model to other people.

My sister is so awesome. She’s getting her PhD in London right now and she’s just amazing. My mom is so happy because an article just came out that she wrote, and then I was in Entertainment Weekly.

That’s a great week for the Tarlov family!

Yeah, I was in Entertainment Weekly but Jessie’s gonna be a doctor.

What songs do when you want to feel amazing?

I love Best Coast. Lately I’ve been listening to a lot of Dolly Parton. I feel like Dolly Parton is really empowering. I love “9 to 5” which is hilarious because my life is more like 5 to 9.

Sometimes you just have to listen to Dolly and you have to say you know if Dolly can get her heart broken it happens to all of us.