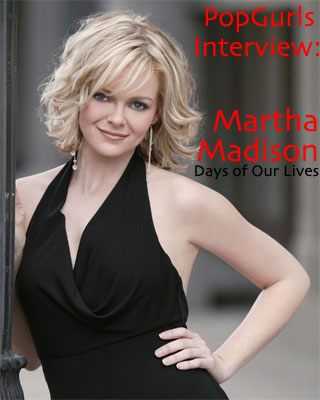 Belle Black is the golden child on Days of Our Lives, despite marrying her boyfriend’s half-uncle basically because he was nice to her while she was all emotionally overwrought while her boyfriend was being held in a cage by a stalker. That’s a lot to handle on top of being a new mother whose baby girl just had a liver transplant but Martha Madison handles it beautifully.

Martha was thrust into her own Cinderella story — scoring a role on her favorite soap — when she was literally thrown into the role of Belle. She talks to PopGurls about what that experience was like, her pick of men on Days and how she always, always finds time for a massage.

You took the role of Belle Black over from another actress that wasn’t particularly well-liked. What was that like?

It was really exciting for me. When I’d originally tested for the part, I got the call that I didn’t get the job. Three weeks later I got a phone call to go down to NBC, that they wanted to see me. I didn’t really know why. I went down there and they told me that they were offering me the role [of Belle]. They handed me the script and said “Go to make-up, you’re starting in a couple of hours.”

It really took me by surprise, which I think just added to the excitement of it. I’ve watched Days for a long time and it was a neat thing to walk in and see all my favorite soap stars and know that I was working with them. (laughs) It was crazy.

Do you think in the long run it may have been better that you had almost no time to let the realization sink in that you had a role on your favorite soap opera?

Yeah, it was probably for the best that it happened that way. (laughs) I would have driven myself crazy with anxiety if I had time to think about it.

When you came home that first day — what was going through your head?

(laughs) The thing was, I didn’t have a lot of time [before I started] so I didn’t get to tell anyone until I was finished taping my first show. So I called my mom — that was the first thing and she flipped out. She couldn’t believe it and that was so exciting. And the next phone call was to my current job because I was supposed to work the next day.

I had to call and say, “Sorry — I can’t come in tomorrow… or ever again!” (laughs) You know, it was like making that dream phone call to the crappy job you don’t want to have. And I think I cried a lot — I just couldn’t believe it! It was just overwhelming.

It is a bit of a Cinderella story.

It totally was — you always dream about this kind of thing but you never expect it to happen.

On Days, you were just embroiled in the drama of Zack dying and his liver being donated to Belle’s baby Claire.

To begin with a big story like that — I was really grateful that they trusted me with something so important. I really gave it everything that I could because I knew this could be a powerful story that could really affect a large number of viewers. It’s never an easy thing to watch a child die and to have something really good and real come out of it — it covers the whole spectrum of emotions. There’s no way to really prepare for that. You just have to go with the other actors and feed off each other and luckily enough I was surrounded by really talented people, which made it easier for me.

On top of everything, Belle has been dealing with, she has been suffering post-partum depression. How do you unwind from that intensity?

It’s hard — I think that’s something that you don’t really anticipate. You watch all these actresses and actors go through all this but you don’t really think about what it’s like, physically, to come down from that. Crying and being emotional like that is physically taxing whether it’s real or not. It wears me out after a while. You come home, try to take a deep breath and go on about your regular life. Take a nap (laughs).

Do you ever take time to do anything pampering for yourself?

Oh, I always find time for that (laughs). I spend a lot of time at Burke Williams. I can always dismiss my laundry and find time for a massage.

Speaking of massage… Belle and Shawn [Brady] managed to have sex in their sleep to create little miss Claire. That took some talent!

(laughs) Talent and some imagination on the writers’ part.

What was the backstory you’ve created in your mind that has given you the ability to have such amazing sleep sex?

(bursts out laughing) I can’t tell you that! No — you know I don’t find anything terribly difficult or terribly taxing about closing my eyes and making out with a really hot guy. (laughs) You do what you gotta do.

I remember reading it and [thinking] “What? They do it but they don’t know they do it? Okay… where do I put my left hand and my right hand?” It was funny. The more exciting part was that the whole barn was on fire at one point and we did all this pyrotechnic work and that really freaked me out. I was like “What do you mean I can’t open my eyes, the haystack is on fire five feet from me!”

Wait. I want to clarify this: The barn was on fire, while you two were having sleep sex.

After we had sleep sex, we were passed out and they lit the whole set on fire. And I’m not allowed to open my eyes and I have to trust Jason [Cook, who plays Shawn] to pick me up and run me under a burning beam that falls about three feet from me. That, for me, was terrifying — I am terrified of fire. That was the hardest part of it for me, but it turned out and looked really cool. Thank god Jason’s strong!

Most people like to be whisked away in a romantic gesture, but not necessarily from a burning building.

It certainly wasn’t ideal for Shawn and Belle’s first time, but certainly typical of a daytime [soap].

Do you think that their experience will encourage a lot more sleep sex with Days of Our Lives fans?

I hope not! I mean, it’s just the kind of thing that only happens in Salem, or else it would catch a lot of people by surprise.

What’s the craziest soap opera plot on Days that you loved?

That’s a hard question… I think Marlena being possessed by the devil and levitating above her bed while her family was mourning her. That’s a stroke of crazy genius. I almost wish I there at that time, it would have been a lot of fun.

You see these kinds of storylines and you have a lot of fun with them while you’re rehearsing before you have to get real serious about it. That would have been a fun one — I would have gotten a lot of laughs out of that.

You’ve been a big fan of Days of Our Lives for many years. If you could hook up w/any guy in the history of Days, who would it be?

Well, it’s no secret that as long as I’ve watched Days I’ve had a big crush on Peter Reckell [who plays Bo Brady]. And that’s, you know, weird, because he’s my mom’s age.

I flirt and joke about this with Brody Hutzler [who plays Patrick Lockhart] all the time — I think he is the hottest man. (laughs) I have my own personal campaign to hook Belle and Patrick up. It would be a lot of fun.

It’s always good to have your fantasies.

Oh yeah, everybody has own their idea of where the story should go. (laughs) Mine happen to go towards anyone who’s 6’3 and over.

If you could pick an ideal role, what would you want to play?

You went from Texas to New York to Los Angeles — which was the biggest culture shock? What do you like best about each place?

I went from College Station, Texas, to New York City overnight, with nothing but a suitcase and an address. I think that was a culture shock in a really positive way. I always had the dream of going to New York and when I got there I was like a five-year-old on Christmas morning. That was the biggest shock for me because it was completely opposite of where, and the way, I grew up in the best possible way.

Moving to LA — I wasn’t as excited to do it, I just knew I needed to. I find LA to be very similar to Houston, where I grew up. Everything’s really spread out and the traffic is really bad. There’s a lot of sunshine. In New York, everything is really shadowed so even if it’s sunny you don’t get a lot of sunlight and you’re not out in it. When you come to LA and you walk outside and it’s like the sky has opened up and the sun god is shining down on you (laughs). The weather is wonderful here, but if I had to choose, I’d be back in New York.

During your time in New York, what kind of acting did you pursue?

My agent in New York said that I was very “soap-y.” It was his prediction that daytime is where I’d end up and so he sent me out on a lot of calls [for soap operas]. I tested for Guiding Light for the role of Marah [Shane Lewis] and that was super exciting. I thought, well, if I’m going to get this far on this one, then maybe I’m going in the right direction.

There really isn’t a lot of television that comes through New York. You go on maybe an audition a week if you’re lucky, [in LA] you go on 10 a week. The magnitude of work here is so much more.

And then you get the call and you’ve got a starring role almost overnight.

That’s the crazy thing about this business. You just never know — you have to wake up with some hope every day that something’s going to be exciting.