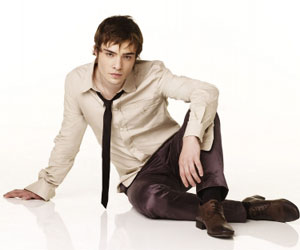 Ed Westwick, it must be said, sounds absolutely nothing like he does on The CW’s Gossip Girl. Which is certainly not a bad thing, but it is a bit disarming once his deep British accent rumbles across the phone line. In fact it’s so disarming that I’ve now decided that it’s a good thing that he plays the role of Chuck Bass with an American accent because, honestly, it would be way too distracting and fans would be even more conflicted in their lust for Chuck — Gossip Girl‘s undisputed bad boy.

To illustrate that point, here are some spot-on comments I came across while reading through message boards for people’s reactions to Chuck: ” He is a morally bankrupt and overly sexually-charged.” “He’s wonderfully bad. And oh so good at being bad. My favorite character.” And my favorite: “He’s like the evil version of [Doctor Who and Torchwood‘s] Captain Jack: he’ll nail anything that moves, he’s charming and he’s got a sharp mind.”

Ed spoke with PopGurls about why he loves playing Chuck, who he thinks Chuck wants to sleep with and why comparisons with James Spader’s Stef in Pretty in Pink are a little off the mark.

Did you initially go in to audition for Chuck?

I think I may have gone in for Nate to start with, actually. I came in the next day and they [asked if I could read for Chuck.] To tell you the truth, I was hoping that I’d get the chance to read for Chuck because when I read the breakdowns and I read the pilot, he was the really interesting character. At first, I think they were going to write it so that he was just a guest star, just recur, but after some thought – because my input, I like to say (laughs) – they decided to change that and make him one of the leads.

Chuck does seem to have more levels than some of the other characters. While he’s cocky, a bit swarmy and certainly manipulative — people still find him very appealing.

Chuck does a lot of things that other people would like to do – not talking about date rape and things like that – but things like being arrogant and a bit of a bastard, to tell you the truth. Maybe some people, given the opportunity, would like to behave that way, may get a kick out of being that way. People find the bad boy appealing – I guess it’s a certain fantasy about things that a lot of us don’t want to do. They are naughty and they are kind of bad.

But in another way, Chuck’s such an interesting person to watch – just to see what he does next. Because you can see that cunning and he calculates things – he works at Blair and gets up to mischief, so to speak. Like all good characters, I think he will show us more colors and the other thing we have to remember is that he’s still young. He’s still learning things and coming into his own as a young man and he’s going to go through some changes and wake up to the different ways the world can [work]. At the moment, he’s kind of living it up and what he knows [is] what he’s taken from his father — how his father acts, what his father does and the way he thinks things should be.

What is the hardest thing about playing Chuck?

In the beginning, the dark side of him was so dominant. It became like it was set in stone – that was him. I had it so set in my mind that this was him — that Chuck was dark and that was how he was — that it was difficult to see how he would be if he experienced something to lighten him up, to change him.

There’s a moment in “Bad News Blair,” where Chuck shows his loyalty to Nate. He goes and helps Nate out in a real sticky situation that Nate gets into with illegal gambling. He goes down there and he shows that he’s a stand by you kind of guy and sticks up for his best friend and shows that loyalty, shows that courage. It wasn’t difficult as much as it was interesting to see what was organic and what was natural, what came out between me and the other actors.

If he had his druthers, would Chuck bed the whole cast? If so, who would he start with?

Wow. I’m pretty sure Chuck himself would like to go through the whole cast – boys and girls included!

Chuck is kind of that guy where he would systematically work his way through everyone if he could. People saw in the pilot that he’s definitely interested in Serena. She’s the Queen Bee, and he likes that – he thinks of himself as the King Bee. It would be his perfect match, his perfect conquest. Serena’s a headstrong kind of girl, there’s no way she’d let that happen. With the others – who knows?

There seems to be some strong underlying chemistry between Chuck and Blair.

Chuck and Blair? Maybe. I’m not going to reveal anything, but yes, things might get a little interesting. Certainly, there’s been a few moments where it looks like potential chemistry could build. She’s in a vulnerable stage with Nate – things are kind of up in the air. We’ll see.

It’s interesting that you said that Chuck would bed both boys and girls. I know many fans have gotten an “anything goes” vibe from him. Have you been playing that deliberately or getting that direction?

Not really. I haven’t actually read the books myself, but I heard that it was suggested that he was bisexual or something like that. But I don’t know, really.

It’s a possibility that they could go down that avenue. I don’t know if I prefer if he did or didn’t — for [Chuck to date a guy], it depends on the whole premise, where the story is going. For me, it’s a good thing as it adds another interesting side of him, another angle that people just don’t know and they can keep asking questions. From my point of view, I like to keep people guessing.

There seems to be quite a few sleepovers with Chuck and Nate.

(laughs) Well, I think they’re just good friends. I don’t know… but in the end, the party in [“Bad News Blair”] will certainly have a lot of boys and a hell of a lot less girls.

Which will just fuel the fire.

Yes, exactly. But it’s not intentional — I don’t think the writers are intending it.

Where did your Gryffindorish scarf in the pilot come from?

The scarf is the work of Eric Daman, the wardrobe designer. He’s done an absolutely fantastic job, I think you’ll agree. Whoever’s seen the show – the wardrobe is fantastic.

It’s the signature scarf. It’s part of Chuck. It’s what he takes around with him and adds to his presence.

Do you have your own personal signature item?

Not a scarf or anything like that. I’ve got a few rings and bracelets, necklaces and beads that I wear.

Have you seen Pretty in Pink? There have been several comparisons between Chuck and Stef, who was played by James Spader.

I haven’t seen Pretty in Pink — so I can’t join in on that reference. I’ve actually got it on my shelf and need to watch it. Somebody brought it to me as a gift – it was a pack, that and Ferris Bueller’s Day Off, which I absolutely love. But I still haven’t sat down and watched it — maybe I will this afternoon.

Hearing you now, your British accent is really apparent. Was it ever an option to make Chuck British?

When I went in for Chuck, I fell in love with the part and thought that I did it quite well. I did it originally in my English accent because that was one of the angles they thought would mix it up a little bit. I read with my American [accent] as well, and they decided to stick with the American so I was happy to play it that way. For me, it’s very interesting – as an actor, you always retain one aspect of you and usually it’s your voice, but when I do Chuck, my British goes and I’m practically someone else.

How did you develop your American accent?

I took some time just listening to Americans, samples on the internet and things. Being around a lot of Americans in February, in Los Angeles for auditions, helped. It gave me a chance to hear the authentic accents – I could draw from that and build my accent.

I like to say that I’m pretty lucky, in the respect that I have a good ear for it. I didn’t need to see a dialect coach, which is the usual way for someone to develop an accent.

You have a band, The Filthy Youth, that you left back in England. What’s it like to perform live?

I am so proud of the music that we put together, so proud it breaks my heart that I can’t actually do it right now. Performing live – it’s just the rush you get. You’re just bringing something to life, a performance to life.

Music gets inside you, music captures you. Music becomes your heartbeat. It’s drug and makes you feel whatever the song’s about. I just love, love playing it and I love getting on stage. I love playing for other people. My friends, we go out and just make a night of it for ourselves.

As someone who connects with music so strongly — what bands do you always go back to?

Absolutely The Doors. I can’t stop listening to The Doors — the L.A. Woman album is fantastic.
The Strokes – Is This It – I love that album.
Arctic Monkeys.
An English Band called The Rakes, their first album Capture Release.
Another English Band – Razorlight. Their first album Up All Night brings back a lot of memories.
Kings of Leon.
And put on The Kinks – I can’t get enough of The Kinks.