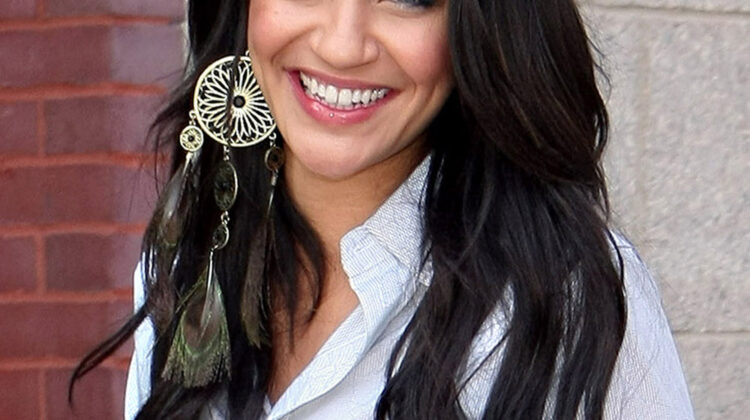 Jessica Szohr had scored several roles on shows like CSI:Miami, What About Brian, That’s So Raven and our beloved Joan of Arcadia before landing in one of the hottest shows today – The CW’s Gossip Girl. As Vanessa, the best friend to Dan Humphrey, she’s already helped him to lose his virginity, bested bad-boy Chuck Bass and had her heart broken by supposed good-boy Nate. And we’re only a few weeks into Season Two…

She talks to PopGurls about how she got the role, cheerleading and if we’re all imagining that flirtation between Rufus and Vanessa.

Please note: there are very vague spoilers below.

Did you initially go in to audition for Vanessa?

Initially. No. I had been working on CSI:Miami, but I had seen the Gossip Girl pilot – my agent always sends over a few pilots that will be coming out so that I know what is going on.

I went to a barbeque with a friend of mine – [initially] I was sitting on the couch with my dog and was like, “go, just call me later.” They called back a little later and said it was only going to be 10 people. We show up and it ended up being at Josh Schwartz’s house — I had no idea. We met Josh and Stephanie [Savage]. We were hanging out, eating by the pool, swimming.

Two days later, I got a phone call from my manager saying apparently I had met the Creator and Executive Producers of Gossip Girl and they wanted me to go in tomorrow and test at Warner Brothers. They’d send the tape to New York and [if they liked it], I’d leave on Friday.

That is how it happened. I was coming out to do three episodes and then after a month and a half, they asked if I wanted to be a series regular.

That’s quite serendipitous! Did anything surprise you about working on the show?

I remember getting off my plane in New York and going to my hotel – every bus, every corner, everything had Gossip Girl advertisements. I was like, “holy crap, I’m going to work on a show like this!”

But I still didn’t have expectations because I was thinking that I’d only be here for a couple of weeks and I’ll have the chance to work in New York, on a cool show and then I’ll be done.

Now that I’m here full time, the most weird thing is that after I’m done with work, I sometimes forget that we’re on a show that people are interested in. So when people are walking up to me, I always think they’re going to ask what subway to jump on, or how to get to a certain area of the city. And they say, “Wait, you play Vanessa!” and I’m like, “Oh, right.”

So, now that you’re on a show about gossip – what’s it like to hit the gossip papers yourself?

I try not to look at any of that. You hear about some stuff and it goes in one ear and you finally have to let it out the other.

What five albums do you have in your personal rotation currently?

I just got a song by a band named Quintessence. And the song is “5 am.” It was on when I was walking into a restaurant in the West Village — I went up to the hostess and asked, “Who is this?”

I’m a big fan of Kenna. I can always listen to a little Norah Jones and I love Radiohead. I still listen to the new Coldplay album a lot.

You get to pick your own theme song — what would it be?

What song reminds you of your first crush?

I can’t remember the name of the song, but it was by K-Ci and JoJo. Even still now, when I hear it, I go back to when I was in 10th grade. I dated the guy for two years. It’s funny, now he’s married to a girl we went to high school with.

But it always takes me back to that place – and I’m like, “oh my god, I remember when we slow danced together” or when we he was playing basketball and I was cheering on the side.

You were a cheerleader? For how long?

Maybe four years. I didn’t do it in that much high school – girls got a little too petty. It was fun while it lasted.

One year, they decided to make it co-ed and four guys that I was friends with tried out as a joke and then ended up really enjoying it. They were my pod, so it was fun to have them to work with. And it wasn’t as petty – because guys just don’t care. (laughs)

What’s your take on the different Gossip Girl couples?

On the show, I think right now the whole storyline with Chuck and Blair is pretty interesting because they almost contradict each other. And I find them very funny when they’re on screen together.

I think everyone’s had a cute little thing – Serena and Dan’s relationship has been cute and fun. A lot of teenagers can relate to their first love – it’s all hectic, and their friends are from different groups. I thought that Vanessa and Nate were interesting because she’s so from a different world.

What’s to come for Vanessa and Nate?

There’s a couple of twists to come in the next couple of weeks. And it’s very interesting because Vanessa and Chuck start to – I’m not going to say date – but there are a couple of moments that come up with them that I find really funny.

What’s to come up with Vanessa?

Now that she’s opened up the gallery, she’s there a lot and starts to have openings and art shows. There’s a few more characters coming on that I think will be a couple more love twists interests. I know Nate does something that Vanessa catches and she gets really hurt.

Eventually, Vanessa is going to stop being hurt by all these people and get a really cool rocker boyfriend that is in a band in Brooklyn.

I think that’s a really fantastic hope for Vanessa because I feel like poor Vanessa has been just moved from boy to boy and she’d be a lot stronger on her own.

Lastly, I have to ask about Rufus Humphrey and Vanessa. There’s been some interesting vibeage there – should we expect a May/December romance?

At this point, nothing. But the way some of the scripts have been written for the next couple of episodes that will be airing – definitely on paper it felt like that and so I think it might play off a little like that… that would be really crazy but I guess, you know, they’re pushing everything on this show so anything can happen!

To me, he’s her best friend’s dad who is like a second dad to her – and it would be really incestuous. But I wouldn’t put it past them. (laughs)