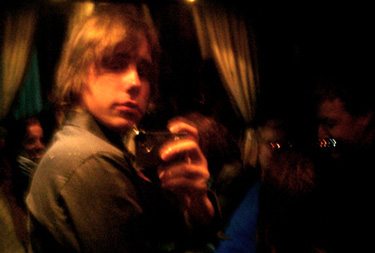 Jonas Bjerre is one third of the Denmark-based Mew, a band who have been described perhaps most aptly as “Queensryche meets Sigur Rós.” If you’re familiar with their music, you know that Bjerre has an impressive, often unimaginable vocal range, writes very clever (yes, wry) lyrics and provides film clips that compliment the band’s live performances. PopGurls caught up with Jonas recently while Mew was touring the US to support the release of their second full-length album
And the Glass-Handed Kites. And although he’s not officially the chattiest member in the band – guitarist Bo Madsen gets that credit, his online journal on Mewsite.com has been read by band devotees since 2002 – he did have quite a bit to say.

I read that you’d been together since 7th grade? Is that true?

Yeah, that’s when we started playing music, but we’ve known each other since we were 6 years old. We all come from the same part of Copenhagen.

Does having known each other for so long mean you’ll have more staying power as a band?

I certainly think so – I think that’s evident already at this point, you know. We’ve been through so much and I think that if you’ve only known each other for a few years, it’s easier to imagine yourself drifting apart or breaking up or whatever. In our case, I think the bonds are a lot stronger and we could stand to go through more together. Everyone has their own habits and quirks and basically we’ve learned to be very tolerant towards one another. We usually say our greatest accomplishment is not having killed each other yet.

As you continue to gain more recognition, are there any social or political issues that you see yourself wanting to speak out about?

I feel very ambivalent about it. I don’t like to voice my opinion politically that much. But our guitar player is very outspoken. I do of course have an opinion, but I don’t know if it’s more valid than everyone else’s – you know, I don’t think it is.

We have very different views than a lot of American people have because we come from a part of the world where the media focuses on totally different things. It’s very different watching the news here. So I don’t know – it’s a matter of what kind of information you’re exposed to.

Are there any other things in your experience here in the U.S. that have been surprising or noteworthy?

I was threatened by an old lady in a gas station once. That was shocking to me. At that point I looked a little bit weird – I had longer hair and I dressed kind of colorful. She told me that they didn’t appreciate people like me in the states – and they had shotguns and weren’t afraid to use them. This woman was the age of my grandmother, so at first I thought she was this sweet, fragile old lady and then she completely turned on me.

You’ve said that you see your music working very much like a film. Can you say more about that?

The fact that it progresses from part to part makes it much like a film with different chapters. We don’t want to make music like, when the song begins you already know the whole song. And that’s how I feel about a lot of things that are played on the radio these days. I like songs that have a longer story. We also use projections when we play and those are films that I’ve made. I used to work in post-production in the film industry.

The [process of creating the] projections always come after the music. I’ll sit down and listen to our finished song and it will shape certain images in my head. Much the same way that the lyrics are written.

I’m interested in the lyrics to the song “Am I Wry? No,” from your last album. There’s a sincerity there mixed with nonchalance. It seems like it’s both going on, and maybe there’s a little bit of a struggle between the two.

I know what you mean by the nonchalance of it, but it is actually written very much in earnest. I play around a lot with the syntax on the English language. That song has a lot to do with relationships and also the whole human inter-relation of subject with the world viewpoint and, you know, it deals a little bit with depression. It’s a song about loss.

On your new album, what song is the most powerful for you to perform?

I quite enjoy performing “The Zookeepers Boy” because everyone in the band is singing and the voices support each other…it’s kind of like a house of cards effect. Everyone needs to join in to make it whole. I think it’s a very fragile song but very strong at the same time, which I like.

It’s very spontaneously written and uses a lot of images of animals…but it’s about love and about relationships. A lot of our songs are about more than one thing because they’re written over a period of time…but that also adds to the diversity within the song, which I think is important.

Is there a question you’re tired of being asked by interviewers?

No – I feel very privileged to be able to do this for a living, so I never get tired of it, I don’t feel like that at all. There are definitely questions that are repeated, but…

Here’s one you’ve probably heard a lot: what are you listening to right now?

There’s this American band called Why – their new album Elephant Eyelash has some very cool ideas. It’s kind of like hip hop and indie rock mixed together, which is very original. I also quite like the Animal Collective’s album, Feels. I saw them play recently in Denmark and it was really great.

I want to say that we’re really enjoying this tour. It feels really great to tour in America. The people are really open-minded, even the people who didn’t know us beforehand, so that’s felt really great.