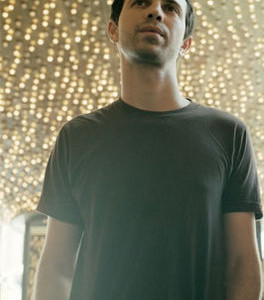 Everyone from Sedaka to the Partridges to the Carpenters has sung “breaking up is hard to do.” For some, getting back together is sweeter that the first union. While Giant Drag‘s twosome of Annie Hardy (vocals, guitar) and Micah Calabrese (drums, keyboards) haven’t experienced breakups/reunions in the traditional relationship sense, the inevitable meeting of the two, their minor split-up (briefly after their earlier EP release, Lemona) and subsequent reunion has given us their debut album, Hearts and Unicorns.

Annie has become well known for her brash, tell-it-like-it-is attitude, and Micah’s the Yin to Annie’s Yang. Together they blend Annie’s dagger-like lyrics veiled in sweetness (with tracks like “Kevin is Gay” that includes an entire verse in cat meow) with Micah’s multi-tasking percussion and keyboard skills (playing both, sometimes simultaneously). They’ve kicked around the UK with the likes of Nine Black Alps and Stellastarr and we caught up with Micah on their current U.S. tour with The Like.

I’ve had the song “Shine, Shine, Shine in the Deep Blue Sea” bouncing around in my head for the last couple of days. Did you put that track on Hearts and Unicorns to hypnotize your fans? How do you feel about that as the last track on the album?

I feel like it’s a little loud. Whenever I hear that come on after the previous song it just kills me, it’s so loud.

Yeah, kinda transforms all of Austin.

It’s cool. For us, a lot of our friends were there that are also in bands, so it was like different [music] scenes transplanted from every city into Austin.

A lot of your friends just happened to be at the festival?

A lot of our friends are in bands and stuff, so they were all there playing shows. It’s actually kinda hard to go see your friends if you’re not playing a show with them. You have to get there a half hour early and wait in line.

I find it interesting when bands tour with a debut album. There is the assumption that you’ll play most, if not all of the tracks on the album, and that’s it. But you’ve been touring long before this album dropped. What do you do to keep your live shows from being Hearts and Unicorns on shuffle?

We’ve already got, I dunno, four new songs. We keep writing. We’ll play some songs that aren’t on the album that haven’t really been on anything, some older songs. One time we just sort of improvised. Annie started talking about how we had t-shirts for sale and started playing guitar along. And I thought, ‘hey I’ll join in,’ and somehow we had a march song. We just mess around sometimes.

Do you feel that having only fours arms and four legs is limiting to your sound? Have you ever thought about bringing someone else in?

I thought about bringing in a foot pedal. (laughs) No, we’re happy with just two people.

So how does the one handed synth work out, when you’re also playing the drums?

Usually it’s a long sustain on the notes. Hit a note and play the drums and then hit another note. Unless it’s a bass line that doesn’t lend itself to sustaining, then I’ll just have to keep one hand on the keyboard and one hand on the drums. It’s usually just a combination of long notes or doing both at the same time.

I’ve read that Annie used to personally book all of your early gigs. Is that still the case or is there Team Giant Drag now?

There is a fairly big Team Giant Drag these days. We’ve got an official booking agent now, so we don’t book our shows anymore. Originally they would just call us, so we didn’t have to book any shows. That was pretty cool.

You are currently scheduled to tour with The Like. Have you met them before or is this going to be like a first-time gig?

We’ve met them before. I had met them a couple of times before the CMJ [Music Marathon] and then at CMJ I hung out with Tennessee and Charlotte for a while. They were really cool. It should be fun to go on tour with them.

Is that how most of your pairings work out – where you know the other bands – or do you kinda get thrown together sometimes?

Sometimes thrown together. Like the Nine Black Alps, we didn’t really know them, but they asked us to go on tour with them in the UK. They were playing an L.A. show and so we saw them and met them. We were instantly friends, and we were like, ‘yeah, we’ll do it.’ Then on that tour we were like a huge family hanging out.

Everyone wants to compare your sound — and especially Annie’s vocals — with the Breeders or My Bloody Valentine. Are you comfortable with that or do you feel like you have your own unique sound?

Either way. People need some sort of starting point of ‘what does this band sound like?’ It’s pretty hard to try to describe music without comparing it to something you’ve already heard. It’s a cool starting point, but nothing is exactly alike. Hopefully we’re not exactly like either of those bands.

So you used to work with Annie’s mom. Did she ever share any interesting stories about Annie that you now use for evil purposes?

We used to work together at [an Internet startup]. All she would ever say is, ‘you have to meet my daughter. She plays music and you guys like the same sort of music’ and I was like, ‘yeah, right.’ But she was nice, and I eventually ended up meeting Annie, and I was like, ‘I guess she was right.’

So, she kinda put you guys together?

Not really. She had told Annie about me and me about Annie, but we hadn’t met until both of our best friends were going out.

You’ve done shows in the UK and the U.S. What’s the difference between the two? The crowd? The venues? The backstage antics?

The [last] U.S. [tour] was smaller shows. Originally we were supposed to tour with the Cribs, but they backed out at the last minute, so we had to put together whatever sort of tour we could. We also did a tour with Stellastar before that and that was pretty good, a lot of big venues. We played Irving Plaza. A lot of people that hadn’t heard us before came to us after the show and bought the CD and they liked it. It seems like people in the UK are just crazier about music and are a little more fanatical about it.

Do you prefer the challenge of playing in front of a room of people who have never heard of you and are most likely there to see the headliner, or would you rather play for a group of loyal fans who are singing along with your ever word?

Both are fun. Sometimes, when it’s a room full of people that haven’t heard you, it’s hard to tell if they like it or not because they just are sort of absorbing it. But usually you can tell [they like it] if towards the end of the set they start cheering louder. Usually after the show we sell our own merch and CDs and stuff and we’ll go sit there and we’re like, ‘I dunno if that show went over well’ and then we get like 20 or 30 people buying CDs who have never heard us before and we’re like, ‘I guess they like us.’

The current trend is to get your big break on a TV or movie soundtrack. What show would you want to be on, and what song would you like them to use?

Well, Annie has always been dying to have one of our songs on The O.C. She’s a huge fan. I watch it, too, so I guess [that makes me] a fan. I don’t know which song would be the best for them, but that would probably be the show.

What kind of animal best represents your personality on-stage?

I don’t know, maybe a turtle. (laughs). Maybe [on stage] I’m more like an octopus or a squid.

Is your dream house a bungalow on a tropical beach, a cabin in the mountains or a loft in the city?

Maybe somewhere in between mountains and the city. It would be nice to get away, but not be too far. As long as there is a recording studio around.

Do you record most of your stuff in a big studio or do you have your own personal space?

I record at home if I’m demoing. We did some of the stuff from the album there, actually. Some of the guitars.

In recording this last album was it an as-it-comes process, or did you sit down and say “now we are going to record an album”?

We had all the songs ready before the album. We had like three days of drums at Paramount Studios in Hollywood and we did all the rest of the stuff at our friend’s rehearsal space, Downtown Rehearsals. Then we took that back to my house and did a few more last minute things, and then just got it mixed.

There is so much music out there right now covering just about every corner and crack that you could ever possible think of. How do you avoid feeling like you have to scream the loudest in the room to get heard as far as getting your name out there and building your fan base?

We just do what we do and if people like it they like it. I guess you can get lost, but there is room out there. People like tons of bands. There is room for lots of bands out there in people’s music collections.

Exactly. And that’s a good place for us to end up. Thanks for your time.