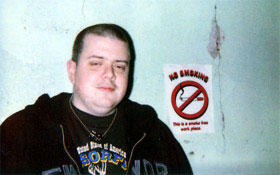 Yes, he’s MTV’s tattooed, hardcore maniac, but there’s more to Iann Robinson than a hoodie and an upraised hand that screams METAL! He’s a shiny boy, fond of happy, dancey things. Pshaw! Have you no MTV, fair popgurl?

I sat down with Iann at Amy’s oh-so-gentle suggestion that I get my ass in gear and write something, anything. (Hey, an interview with Iann would be really cool. Why don’t you ask him if he’d do it?) So I asked. And he agreed. However, It seemed fated that the Q&A would never happen, as my procrastinating skills reached new and lackluster levels. Finally, I pulled it together. To our collective dismay and utter amusement, we were busted by security for smoking. Add to that Iann’s adamant rejection of my imaginary advances (he has the tendency to hallucinate) and you’ve got thirty minutes of pure interview gold. Nay, platinum. But I’ve said enough. You decide.

Audiogalaxy does not support Mac. I have no idea what Audiogalaxy is, by the way.

Don’t you think this is wrong?

Yeah, I think it’s really wrong, especially ’cause I own a Mac. Audiogalaxy, for those who don’t know, like my interviewer…

And made no attempt to find out.

Good. Way to be prepared for the interview. Audiogalaxy is like Napster. You can also download programs and stuff like that. The only one that works with Mac is Limewire, and Limewire is really slow and doesn’t have a huge thing. Audiogalaxy is fucking awesome. I am totally bummed that it doesn’t work for Mac, mainly because I have a Mac. I guess if I had a PC I wouldn’t even think about it. Mainly because I have a Mac I’m really pissed. Don’t try to kiss me.

Have you ever joined the fan club of anything? What was it?

I joined the Star Wars fan club when I was a kid and I just kept renewing. I don’t join musician fan clubs, I don’t really wanna pay $19.95 for a photo. But no, I don’t really join any fan clubs. It doesn’t serve any purpose.

If you had a fan club what would be its name and catchy slogan?

Wow. I don’t know. The Iann Robinson Fan Club, I guess. What would my catchy slogan be? “Smack it and roll over.” Probably “Woman, woman, woman” (in the voice of Animal from the Muppets).

Is that your response?

Sure. I’ll make sure my wife never sees. (laughing)

Ever see The Black Mask with Jet Li?

What the hell is up with that mask of his anyway? Does it not look like he stole someone’s Tupperware and painted it black?

No. I didn’t put that much goddamn thought into it, I guess.

Would you ever fear anyone in a Tupperware mask?

What the fuck kind of website are you putting me on? No, I don’t really fear many people, but I certainly wouldn’t fear someone in a Tupperware mask. I’d wonder about them, but I wouldn’t fear them. I’d ask them questions.

Do you think Stephen King will ever finish The Dark Tower series? By the time he ever does, do you think I’ll care?

I wouldn’t care anyway. I read the first Dark Tower book and was like, Yeah, I’m impressed. I don’t know, Stephen King has lost it, as far as I’m concerned. He lost it when he started letting his wife start writing his books, or at least telling him how to write his books. I think from The Tommyknockers on, other than your occasional…I thought The Green Mile was good. But, I don’t know, I don’t care if he ever finishes The Dark Tower.

“Free Winona” t-shirts: Cheap potshot on someone who’s clearly fragile and living in the past glory of Heathers, or fucking awesome need-to-have clothing item?

I have one, if that tells you anything. I think it’s awesome because…”I’m so fragile and I’m so…” You know what? I don’t really give a fuck how fragile you are. You’re rich. No matter how fucked up your head is, you can probably pay for the clothes that you tried to steal. So, I think anything that reminds celebrities that they get paid a lot of money, and they’re in the spotlight, and they get all kinds of privileges that normal people don’t get, means that if they do something really stupid, like shoplifting, they’re gonna get skewered. This is fun.

You’re having a black tie affair. What do you serve?

Whose black tie and why am I having an affair?

I don’t know. You’re having a black tie affair, which means you’re in a tux and your wife’s in a fancy ballgown…

I know what it means. It’s probably a funeral. So I’m having a black tie affair?

Mmhm. What do you serve?

Again, stop trying to kiss me. Try to act professional. If someone else listens to this tape, they’ll be like, what were you trying to do to this guy during the interview?

What do you serve? Would you serve anything that necessitated the use of a marrow spoon? Would you be offended if a guest, say me, refused to eat the marrow and possibly began dry heaving at the table while the other guests dug in? Perhaps it would be best to skip the marrow.

I don’t even know what the hell marrow is.

Marrow, like the inside of a bone. They have special spoons for it, apparently. It’s like some delicacy type…blech.

Since I’m not a cannibal, I wouldn’t probably ever serve marrow.

So, we’re skipping the marrow. What would you serve at said black tie affair?

Fill in the blank: Emeril Lagasse is a twit. If I hear him say BAM one more time I’m gonna _____.

Beat him until he dies, I guess. No. If I hear him say BAM one more time, I’m going to…I don’t know, man. I don’t watch Emeril Lagasse. It doesn’t bother me that much cause I don’t ever see the guy. Probably hit him with a frying pan or something.

Who should be more famous than he/she is?

Besides me? That hasn’t really been a problem. I got a lot of who’s too famous. PW Long.

Who should be less famous than he/she is?

Most movie stars. Tom Cruise, Stephen Dorf, Billy Bob Thornton, Angelina Jolie, Vanna White, anyone who’s ever been in Playboy who’s famous because of that only.

We could sit here for this whole interview and let me list off who’s too famous for their own good.

What’s the one thing that would make/has made you break down and shop on e-bay?

Oh my God. I buy a lot of old skateboard videos and magazines and stuff off there. Old stupid 80s movies that are out of print, like Laserblast, Supervan, which is a great movie, figures that are really cool, a lot of shit. I buy a lot of stuff on e-bay. Big fan of the e-bay action. I just bought Mark Messier and Mike Richter Starting Lineup figures.

Potatoes are the world’s most perfect food. Give three reasons why.

I’m Irish, they’re easy to cook…I wouldn’t really call potatoes the perfect food…if you throw a raw one at somebody it really fucking hurts.

Would you rather shake your ass or watch yourself? Is it possible to do both at the same time?

I’d rather watch somebody else shake their ass. What am I watching myself do?

No, I don’t wanna watch that. I don’t think anybody wants to watch that. I wouldn’t really rather do either. I’m not a big shake your ass guy, nor am I the watching yourself type, especially watching myself shake my ass.

Is it possible to do both at the same time?

No. No. You probably could if you were, like, a gymnast.

What word would you like to make into the newest pop culture phenomenon?

Instead of everybody going up when they win an award and thanking God, it would be really funny to see everybody go up there and thank Satan.

What was the last movie you saw that you were ashamed to purchase a ticket for?

A.I. I wasn’t really psyched about that. I’m trying to think of the last movie I saw that sucked ass. I can’t think of one.

Brotherhood of the Wolf?

Brotherhood of the Wolf! There you go. One of the ten worst movies ever made. So bad my brain is blocking it out like it was pain.

You’re allowed sex with one cartoon character. Who is it and why?

Is this outside of someone drawing you?

You’re making me have all kinds of dirty thoughts here. Jessica Alba, who’s the chick from Dawson’s Creek? Oh, Katie Holmes, Jenna Jameson…See, I don’t get really super attracted to celebrities, you know? Laetitia Costa, I guess, and Halle Berry.

What’s the one article of clothing NO ONE should ever wear? EVER.

That’s a hard one. Let’s see, there’d be the blazer with the cute punk rock pins on the lapel, cowboy boots, cowboy hats, rich, white women wearing wife-beaters to be street. That’s annoying.

Which boy band would you most wanna be part of and why?

The devil and not even in disguise. As soon as these idiot fashion chicks start wearing old AC/DC and Aerosmith concert t-shirts all bedazzled up and paying upwards of a hundred bucks, it’s obviously evil.

It’s a little bit of both. I mean it’s craptacular in that…what’s that guy’s name who’s in it? The guy from Dance Fever?

Adrian Zmed from T.J. Hooker fame. That kind of makes it craptacular, and the “Ooh I gotta go back to school” song was no help. But I think the thing, the shining grace of Grease 2, is the fact that forever, until the day she is buried in the ground, it will be an embarrassment to Michelle Pfeiffer.

That’s what makes it genius?

That’s what makes it genius.