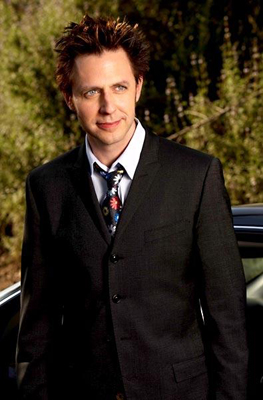 James sits down with PopGurls to talk about his wholesome new adventure with adult film stars Belladonna and Aria Giovanni, the perils of naked photo shoots and how Joss Whedon gave him his first job in Hollywood.

How is PG-Porn different from “Skinemax”?

When I was a kid, we used to go to the X-Rated movie theatres to go see movies with my friends. We would go and laugh, and recite the dialogue from those movies and talk about the films. I can’t remember a single sex scene in any of those movies – that’s not why we went. We watched the other parts – and this is the other parts.

Every episode is extremely different and they all have a different format. The first one is with Nathan Fillion and Aria Giovanni and it features Aria Giovanni’s first ever male/female kiss. For which she broke down in tears on set.

She came up and realized that she had to kiss a man – she’s straight in real life – she had never done that before [on screen] and was very frightened. So I went in and talked to her and said, “You don’t have to do this if you don’t want to, but it would be great if you did.” She was professional, she had the terrible task of kissing Nathan Fillion – which is about the worst thing I can imagine.

Quite a hardship — I’ve read about how Nathan has a problem coming on to you.

How frustrating! So, what else inspired you to do PG-Porn?

I love the idea of bringing different worlds together — it’s an interesting way to find out about another culture. I found out a lot about [adult film] – sometimes more than I wished to find out since I started doing this show.

What was the most shocking thing you found out?

Do you really want to know? We did a PG-Porn photo shoot for Femme Fatales and it was a like a Penthouse photo spread – just without the sex. Holly Randall shot the bits – she’s the daughter of Suze Randall who sort of the person who originated the Penthouse photo spread. Holly shot thousands of nude shoots – I asked her what was something I wouldn’t know about shooting naked people. She said it’s the flies. They live up on a ranch and they do a lot of shoots outside, naked, and the flies gather around the female genitalia.

Yes. They’re constantly having to deal with flies.

That is kind of shocking, and disturbing.

How did you find everyone for the project?

I found everybody through MySpace. I knew about Belladonna, because every time I posted a new blog – I would go and check and see where I was in the top 10 blogs on MySpace and Bella and I were always right next to each other. In my mind, she was my archrival. Just because we were so similar in the amount of hits we would get in our blogs. She has has many more friends, but I have way more blog readers than I do friends. We were always right next to each other and I was always happy when I was one slot ahead of Belladonna. Which I usually was…

I knew she was very popular with her presence on MySpace and I knew she was very interactive with her fans. So she was one of the first people I contacted on the first day that we decided to do this. I got a call from her husband 15 minutes after they got the email. He knew Dawn of the Dead and they knew Slither and they liked those movies so they were fully into it right away. I got really lucky because, first of all, she’s a delight.

Bella’s one of the most charismatic, fun people that I’ve ever met. Everybody that meets her thinks the same thing. She’s drug-free and she runs a business – she and her husband run Belladonna Entertainment and they put out their own videos and they do that on their own. She was able to then push me towards  Sasha Grey and push me towards Jenna Haze and towards other people who are responsible.

Were you a fan before she signed on?

I’ve actually never seen one of her movies and I don’t think I ever can – they invited me to the set, I can’t do it.

Is it a sister thing?

It’s not exactly like a sister thing, because I think she’s attractive. [And] I’m not one of these directors that gets together with actresses that I work with – when you direct somebody, you become parental.

How did you meet Aria?

Also through MySpace. She was funny, because in the beginning she was so robotic. I thought she was the rudest person in the entire world.  She would write me back: “How much? What days? Will you use my real name?”

No hello, no goodbye, no anything. I thought, “This girl’s a robot.” When I met her, it was the same way. But she’s so protective because she’s her own manager. You don’t know who is contacting you in those situations and what they want exactly. Even if I am who I say I am, what am I doing?

And now, she’s the warmest of people. She comes to parties at my brother’s house and she’s a real sweet person.

Is there a moment that you can’t wait for people to see?

You have a very big online presence with MySpace, Twitter and your fan club. Were you were naturally inclined to be so connected, or is it primarily for marketing?

It’s both – I created Troma’s website way back when. I’ve been on the web since there has been a web and I was on the Internet before then. I enjoy the social networking stuff normally – but I didn’t get on MySpace until my ex-wife was on there and she had gotten a lot of attention.

I knew there should be a Slither page, and then Universal made a big Slither page so it little by little [the profile] became me. That’s when I got involved with it and I find it really useful because I could check out the pulse of what’s online.

If you read a lot of online stuff, you can become jaded – because there are people who love you and people who hate you. But that doesn’t really give you a sense of anything because a lot of people just hate stuff. But with MySpace and finding out that people like some of the stuff I’ve done, and finding out what they like – I was able to find out what they want. And PG-Porn is somewhat the result of that.

Humanzee, what I did for XBOX, is 100% that.  I blogged about Humanzees, I wasn’t at all planning on doing a show about them. I was just fascinated by human/chimp hybrids, and I wrote this blog and people went crazy on it, they loved it! People started making this fan art with me as a monkey – it just caught on. I knew there was something there that people liked, and when it came time to do the XBOX stuff, I came up with Humanzee.

You hear about artists that separate themselves from people and that ends up being their downfall. Somebody is an entertainer and he ends up getting rich and he doesn’t interact with normal people anymore. It’s only the other people who are rich and successful and loses sight of what life is about and he can’t entertain anyone because he’s only entertaining that [small group]. It’s either too manipulative or too whatever. I think that’s true for me in terms of my life – who I interact with and how, but being online – you need to walk the streets and experience things and there’s the streets of the Internet. Interacting with actual real people and see what’s going on with them and that’s important to me.

There’s some real drawbacks – as more people know who I am, it becomes more difficult but I’m trying to maintain a commitment to fans and people online who care about that stuff.

I think that, as a fan, when you can have that kind of interaction with someone you respect and they take you seriously, it creates and maintains interest and a connection.

I get so many emails at my MySpace mail that I can’t always answer questions there. But I do go every  morning when I answer my email, I answer the questions of those at the fansite, jgas.org. It’s part of my day.

I get a good feeling about telling people honestly — as much as I possibly can — what’s going on with me, what I did and how I got there. Because people are looking for answers. Usually they’re looking for the wrong answers – the most common question I get is “How do I get an agent?” You get an agent by writing a good screenplay. There’s no doubt about it. People refuse to believe that. They refuse to believe that good things will get noticed, but you have to keep going for it. It’s work.

How did you get your start in Hollywood?

Joss [Whedon] gave me my first job in Hollywood. I wrote a pilot for him that never got made. He read my screenplay for The Specials and he had read a book I had written with Lloyd Kaufman All I Need to Know about Filmmaking I Learned from the Toxic Avenger and he tracked me down and had me come in because he wanted to do a pilot about a B-movie company for FOX. He had sold the idea and he had me come in and write it, but it never got made. But that was my first actual job in Los Angeles, in mainstream entertainment.

We stayed friends after that. He was a big fan of my novel, The Toy Collector — which pops up in Dr. Horrible, which I had forgotten about until people started sending me frames. It’s so funny that people can even find it, it’s so minimal.

Check out PG-Porn at the official site or at Spike.com

Get all things James Gunn at his official site.