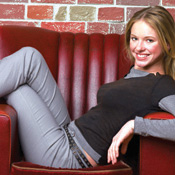 Kate Todd, 16, portrays Radio Free Roscoe‘s girl in the middle. Her character Lily was last seen fighting her feelings for two boys – her longtime friend Ray versus her new pal Travis – and her choice is the topic of fierce speculation amongst fans.

For her part, Kate doesn’t have time to get trapped by boys. She has plenty of good friends, is filming the second complete season of RFR, and still has time to be a rockin’ musician. I spoke with her via phone during her lunch break on the RFR set, and learned that for her, the boys of RFR are interchangeable.

You’re a Renaissance woman of sorts – model, actress, and musician. Is this what you always thought your life would be like when you turned 16?

No, not really. I never thought I would be doing all three. It’s certainly been a surprise, but I’ve always liked performing and acting and music.

Is there one that you prefer more than the others?

No. I like all three of those things, and if I didn’t like one of them, I wouldn’t do it.

That would be a really hard decision, because singing and acting are my two favorite hobbies. So, if I had to pick, I guess I would become a world-famous actor just because – not because I like one better than the other – but just because, even if I wasn’t able to sing another note and was really bad at it, I would probably still continue to do it, just for personal pleasure.

I read somewhere that you’re a Lisa Loeb fan! If someone put a gun to my head and made me pick one album to take with me to a desert island, Tails is one that I would choose. What’s your favorite song of hers, and what drew you to her music?

I’ve always been a Lisa Loeb fan, ever since I was really young. Tails is actually one of my favorite albums, too. My favorite song, I guess would be… you know “Garden of Delights”?

Yeah, that one, and “Stay.” I really love both those songs. I think she’s really great. Her glasses just totally top everything off.

When I was younger, I knew a boy who had an enormous crush on her, and the glasses were the thing for him. It’s what makes her unique.

The thing is, when I was younger, I didn’t share this interest with any of my friends. I was basically the only one of my age group who was listening to CDs and really buying unique music. I kind of had [Lisa Loeb] as my own pleasure to hold on to. It’s not like I shared it with my friends and we hung out to it. They didn’t even know who she was.

Maybe with your age group she was more well known, but since I’m a little younger she was less so. But my dad is really into music, and he introduced me to that.

What a great dad!

Yeah, he’s totally great. He introduced me to a lot of good music.

In the RFR episode “Crush Me,” Lily makes a soundtrack for her future. What three songs would be on the soundtrack of your life?

Not really considering anything symbolic, I really like “When I Come Around” by Green Day, Sheryl Crow’s “Every Day is a Winding Road” and Vanessa Carlton’s “A Thousand Miles.”

Last year I saw a Counting Crows show and Vanessa Carlton showed up. They performed that song, and it was just brilliant.

Wow. That song! I used to play piano when I was little for eight years – and the piano in that song is so incredibly… oh man, it’s wonderful. I love it. It sounds like we have very similar tastes in music.

Early on in the series, you were often the only girl amongst a gaggle of boys on RFR. Do they treat you like one of the guys, or like a hands-off girlie-girl?

I grew up with a bunch of guy friends in the country, so I’m pretty flexible when it comes to hanging out with guys. But they treat me like one of the guys, which is nice, they’re like big brothers to me. We have each other’s back.

Do you have a real-life Ray in your life? Some guy who you grew up with, who keeps getting cuter and cuter every day, and who you ended up with a crush on or he ended up showing interest in you?

No, not right now anyway.

Are you just too busy for that?

Is there anyone in the cast that you are particularly close to, more than the others?

No, no, no. We all hang out. I can go out with each individual guy and I have the exact same fun with all of them. They all have their own traits. Like, I might go to a concert with Nathan Stephenson (Robbie/Question Mark), or I might go to a play with Nathan Carter (Travis/Smog), so they’re really interchangeable.

We’re going to go to New York, on the hiatus. All of us.

Are you just going for fun, or are you going to be doing promotion there?

No, it’s just a vacation. We may stop by and see The-N, but that’s it.

What would fans be surprised to learn about you?

You know, I’m not much different [from Lily]. We share very similar qualities. I’m very outgoing and energetic, I play sports. I like to go out with my girlfriends and have fun, but I can also jam with my guy friends.

Are there things they would be surprised to learn about your co-stars?

They’re regular guys. They just really are. I don’t think there’s anything surprising about them.

That makes them sound kind of dull!

No, no. They’re not. They’re just… guys. We all have a bit of our characters in us, but on the other hand we’re not completely the other side of the fence, either.

I totally find myself saying it in real life! I’m always amalgamating two words and saying, “Best of both worlds!” My friends are like, “Isn’t that from your show?”

The Internet has done a lot to spread word of mouth about shows like Degrassi: The Next Generation and RFR. How Internet savvy are you? There have been imposters posing as you on message boards, you know.

I’m fairly Internet savvy, I guess, but I’m not hooked by any means. I don’t go on the Internet often. Sometimes I’ll look at the message boards just to see what’s going on. I’ve seen some of those imposters. You know, it’s cool and kind of funny sometimes. But, you know, I download things and use Instant Messenger, and that’s really all I need to do.

You confessed recently to a magazine that “More Than A Single” is your favorite episode of last season. What specifically did you enjoy about that episode? Are you excited to see things heating up between some of RFR’s main characters?

I enjoyed Lily’s musical growth in that episode. The idea that she got to produce her own single with the help of Travis is really cool. It allowed her to expand her musical abilities. I’m excited to see what happens in the upcoming episodes. Every time I get a script I read it right away and try to form an idea of what will happen in the next episode. I’m really getting into it!

So, they don’t sit down and discuss story arcs with you? You just learn script by script?

Well, I guess if I pried and pried they’d tell me something.

If you were Lily, which boy would you choose – Ray or Travis?

They each have their good traits. Ray’s funny and Travis is smart… so a combo of both would be great!

If you could create a storyline for Lily, what would it be?

I don’t know… Lily goes to Hawaii! Woo Hoo! That’s probably just because I want to go to the beach. I’m dreaming a bit, here.

Jake Epstein from Degrassi has had a hand in the songs that his character performs on the show. Are you ever involved in creating the music that Lily performs? Would you want to be?

I sing the songs that the writers write, and I learn the guitar portions as well. But most of the songs follow a storyline, so the writers write according to the plotline. I do like to write, and down the road if I could be involved in the creation of Lily’s music I would be totally into it. But right now, I just sing and perform them.

Is it nerve-wracking to have to perform – as a musician and singer – so frequently on the show?

In the beginning it was, but now I’ve become more comfortable with singing. I’ve had a few voice lessons. Now it doesn’t phase me much, which is good. I got over that little hump.

So your early episodes were similar to Lily’s first performance at Mickey’s in the pilot?

Audrey was Lily’s first girlie-girl friend, and now Lily kissing Travis, and Audrey not sticking around to hear the explanation and apology have damaged the relationship. Do you think friends can come back from something like that?

It depends on the severity. I think that in high school people are very fickle, and [Audrey being] someone who is that fickle and who has treated Lily that way, I think it would be hard for [Lily] as a person to accept that Audrey made a mistake. On the other hand, if she came back and showed some remorse, I think Lily is the type of girl who would give someone a second chance and doesn’t hold a grudge. We’ll see!

I don’t have a favorite, they all have their unique flavors that they bring to the table. Ed and Ted are hilarious, and Principal Waller is the one who’s always stopping RFR from going farther and doing stuff they want to do. And, off set, the guy who plays Principal Waller (Hamish McEwan) is hilarious. I really can’t choose a favorite.

There are some new characters on RFR next season, can you tell us anything about them?

Lily gets a best friend, and there’s a new kind of punk guy that comes into the show. They’re really great, off set and on set.

I know you can’t spoil me with details of the upcoming season, but if you could choose one song to represent the mood of the new episodes, what would it be?

It would be very upbeat, with lots of energy. There are lots of twists and turns. I wouldn’t be able to choose one. I couldn’t encompass all the emotional and political trials and tribulations into one song. Basically it’s very fast-paced, high-energy… like last year, but expanded.

I can’t wait. Thanks so much for taking time to chat with me.