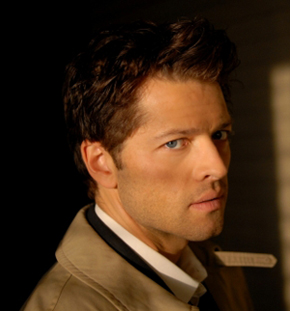 Misha Collins literally exploded on the scene as the Angel of Smokin’ Hotness in the Supernatural season four premiere. On a mission from God, Castiel yanked Dean up from Hell to do His bidding – and we are all too happy to go along for the ride.

Misha talks to PopGurls about how he got past the FBI, why flying is overrated and if he prefers being touched or groped.

Fans have commented on how they like the way Castiel has been played — taking angels from cherubic to something more powerful and scary. What makes something scary to you?

If it’s even the tiniest bit scary, that will make it scary for me. I can’t watch horror movies. I don’t like to watch horrifying things. I have a godson and he wanted to watch SAW 3 with me and I said, “He’s six years old. Well, if a six-year-old could handle it, certainly I can.” There was no way I could sit through it.

I have a very vivid imagination so I scare easily. I don’t startle though. Like, if you were to jump out of a closet at me, I would be pretty cool. I just don’t think that I have a fully functioning reflex system. The more psychological stuff does get under my skin.

I played a serial killer a couple of years ago in a movie called Karla. He was the real-life serial killer [Paul Bernardo], and I got some audio recordings of him and a lot of visual images of him and transcripts of him, so I had a lot to work with. So I really started to get into the skin of the character and I started having his dreams — I was dreaming the serial killer’s dreams and that scared the shit out of me. I was afraid that I had caused some permanent psychological damage to myself – luckily, I came out the other side of that. But that was scary.

You’ve had some incredibly powerful lines as Castiel – in particular from the season premiere — “I’m the one who gripped you tight and raised you from perdition.” Did you practice that a lot?

Whenever I’m working on a shoot and it’s the first scene that I’m doing for that role – no matter what, there’s always some sort of anxiety that builds up. I just end up putting more pressure on myself for that scene. There was a lot going on in that scene – I was getting shot and there were explosions and I couldn’t help but overthink the dialogue a bit. And yes, I did plan how to say that line.

We did one take and Kim Manners, the director, said, “Hey, Misha. It was like you were trying to make it spooky or something. Can you make it simple?” So, at that point, I threw out all of the stuff that I had planned and did it more simply. And that’s how it came out.

It’s gonna be a line of a dialogue that stands out — I don’t think there’s any casual way to say “I’m the one who gripped you tight and raised you from perdition.” (laughs)

Not unless you were just sitting around, having a few beers at a bar.

Possibly. I’ll try to slip it into casual conversation. See how it goes. Let me make a note.

What’s one of your favorite lines on an episode to come?

“I don’t envy the weight that’s on your shoulders, Dean. I truly don’t.”

You thought you were auditioning for a demon, only to find out he was actually an angel. If you were a demon, what would you want your power to be?

Oh, you ask good questions! If I were a demon, I suppose that invisibility would be nice. This is a common question that one should have an answer to – like what kind of super power would you want? I never really had an answer to that. What would you want?

Invisibility sounds like it would be really handy and kinda fun.

I don’t think I’d really want to have the power to fly.

I totally agree with you – I think it’s overrated. Especially with modern air travel as it is, it’s not that unique anymore.

And you’d have bugs in your teeth…

That’s an excellent point! (laughs) No one ever talks about the fact that there’s no windshield when you fly.

If you were forced to have the gift of flight, you’d need some kind of helmet.

You’d want to have a visor! (laughs)

If you were given the gift of conjuring in real life, but you can only conjure ONE thing – what would it be?

That’s really nice — but I might go for a really tasty chocolate milkshake at a moment’s notice.

It’s probably more practical. You probably get the same effect from a chocolate milkshake, plus the added benefit of caloric value and nourishment.

You were an intern at the White House – what department did you work in?

I was there for six months in the Clinton Administration – it was right before Monica Lewinsky sort of sullied the position of White House Intern for the rest of us.

I didn’t actually love being there, but I did get to read some incredibly funny applications for jobs. There was a former Miss America from some point in the 1950s – she sent in all of these soft-focus, glossy colour photographs of herself. She wanted to be the Secretary of Agriculture. It was on heavy photo paper, really glossy, really airbrushed. Under each photo was an inspirational comment in cursive font, like “Works well with others.”

There was a guy who wanted to be Ambassador, and he thought he was qualified because God had spoken to him in the bathroom of the Mayflower Hotel.

They were highlights of the job.

Was there anything interesting in your past that might have failed the FBI background test you needed to fill out?

Well, my mother was a leftie in the 60s and she did a Freedom of Information Act filing and got her FBI files and they had her down as a suspect for a Capitol Hill bombing sometime in the 70s. She wasn’t responsible for it, but that could have been a problem.

The FBI background check that you do when you apply for White House intern is a very lengthy set of forms. They require you to do things like tell every address you ever lived at and the name and phone number of a neighbor at that address. Names of classmates and every school – when I was growing up, we were very poor and were evicted a lot. I was in a new school at least once a year. So I had more schools to list than I could possibly remember, [much less] classmates from all of those schools.

There were so many tedious questions, that I got kind of glib and I started making jokes — on the FBI background check. I was 18 years old and not a big drug or alcohol user, but I had been at a party and smoked a joint. Clinton had said in his campaign that he had smoked something and didn’t inhale. So I wrote this lengthy answer to one of the questions about not inhaling – a joke about Clinton’s [comment]. I’m putting it into the U.S. Mailbox, a 20-something page document – and as I dropped it in the box and saw it sliding in, I tried to reach after it as I realized I put way too many jokes and stuff that I should not have said in it. The FBI may not have the same sense of humour as I do! But I didn’t catch it in time and I had this sick feeling, “Why did I do that? What kind of a fool am I?” But I got the internship.

How long were you at NPR?
I was there for six months as well, on a show called “Weekly Edition.” They had offered me a job, but at that point I was still in college – I had taken a year off – but I decided to go back to school instead of taking the job there. I loved that job.

If you could host your own radio show – what would it be about?

It would be about adventure. I’m a founding member of the Los Angeles Map and Touring Club and we go out and get tours of whatever strange facilities we possibly can. We went to a foundry where they were casting bronze, to a sewage treatment plant down in Long Beach and to the San Pedro Harbour where they were loading all the containment vessels. We went to the largest landfill in the country and go hiking in the Angeles National Forest.

Last winter, we went cross-country skiing and built an igloo. A bunch of us slept in igloos for a few days.

What was the hardest thing you’d done with the group?

The hardest thing was kayaking down the Los Angeles River. Where do you live?

I live in New York. But I do know that the Los Angeles River doesn’t really have water in it…

Exactly. And the water it does have in it smells an awful lot like sewer. There was one person who had kayaked the river, to my knowledge, up until last year, and he was a reporter for The New York Times and had done it as an expedition. I thought it would be a great idea to do it and I rallied up everybody and said, “Let’s go kayak down the L.A. River” — and nobody would. I had to do it by myself. It was really disgusting.

Just this past summer, another organization decided to do another kayak ride and they solicited my involvement. It was going to be a 3-day expedition and after the first day, I said, “You know, guys, I’ve done this before and I know how awful it is and I don’t know why I’m doing it again.” So I quit on the expedition – I don’t like to be a quitter, but I did.

What adventure have you been most proud of?

Outside of that little group, I rode my bike across country.

And I built my house, and I built the furniture in it. I made my way through college as a carpenter so I have some skills in that department and I’m pretty proud of that fact. It took me almost two years of doing it full time and four years of tinkering… a lot.

In a lot of interviews, I’ve seen people ask if you’ve been prepared for the Supernatural fan response. In a recent Q&A with The CW, when asked about the fandom, you said, “I’m ready.” Let’s see how true that is…”If you had to pick, which name for a LiveJournal community would you prefer: Castiel/Dean: Touched by an Angel, or to borrow Dean’s line: Castiel/Dean: Groped by an Angel.

Well. Both of those have homoerotic overtones…

Welcome to the Supernatural fandom.

(laughs) I think that I would go full-bore with “Groped by an Angel” instead of tiptoeing around the issue. I think that might elicit more humorous threads. Why not? Go all out.