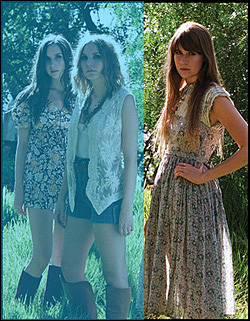 Not one of them is old enough to buy their own beer yet, but the three charming girls who make up the Los Angeles-based band The Like – Tennessee Thomas, Charlotte Froom and Z Berg – have already opened up for the likes of Tori Amos, Phantom Planet and Maroon 5. Tennessee, the drummer, is the oldest at 20. “In December I’ll be 21 and Charlotte and Z will have to wait outside the clubs while I go in,” she jokes in her soft English accent. (Charlotte, who plays the bass, and Z, who takes the lead on vocals, are both 19.)

All three girls were born into musical families – Z is the daughter of A&R exec and Beck producer Tony Berg, Charlotte’s dad is Elvis Costello/Sheryl Crow producer Mitchell Froom, and Tennessee’s dad Pete Thomas plays in Elvis Costello’s band The Attractions (now The Imposters). Critics like to pretend that nepotism is the reason The Like has been so successful, at least until they get their hands on the music and realize that these girls have raw talent, no matter who their daddies are.

A week before The Like heads off to the East Coast in support of The Kings of Leon, and a week after the band’s major label debut album Are You Thinking What I’m Thinking? hit shelves with glowing reviews, I caught up with Tennessee via phone for a quick chat.

Why did you choose to play the drums, out of all the other rock ‘n roll instruments out there?

I actually played piano for 10 years, miserably, and then tried to have a go at the guitar. I just couldn’t get the hang of it. It was so hard! (laughs) In high school I decided to join the choir but the teacher wasn’t very nice, so I ended up in the band. I was going to play the piano, but when I showed up there was no one on the drums and I thought I would give it a try. Playing the drums came naturally to me. It’s amazing how much different it is to do something when you aren’t forced to.

The group started taking off while you were all still in high school. How did you manage that?

In high school we mostly played shows on the weekends until senior year, when we had a couple of shows during the week. We fell in with a group of really nice bands – Phantom Planet, Maroon 5, Rilo Kiley – and they gave us gigs even though we stunk. I graduated a year before Charlotte and Z, and did college for a year, but by the time they had graduated we were ready for a record deal. We knew who we were and what we were doing.

Do you remember your first gig?

Oh, god yes. (laughs) Our friend was having a birthday, and it happened to be New Year’s Eve. Her cousin is in Phantom Planet, and they’d heard we had been practicing and wanted to see what we could do. They said, ‘Come on, it’ll just be one song, it will be painless,’ and so we practiced. We practiced the entire day before the party, and then at sound check when everyone heard us they thought we were so good they asked us to play two songs. And so, of course, we played one song really well and one song totally sucked.

Are there musicians you are nervous to play in front of?

Pretty much all musicians! (laughs) Seriously, at this point, we’ve played in front of so many brilliant musicians, and you just have to get over it. We can’t be anything other than what we are.

What do you contribute to the songwriting process?

Z was writing songs for years before she met us, so by the time we got together she had a pile of them and was pretty good at it. Charlotte and I have been trying, but it’s all rather silly.

Is songwriting something you even have interest in?

It is! I would love to be able to finish something, but Z is so good. It’s intimidating.

What was the first concert you ever attended?

Well, my father is a musician, so I’ve been going to shows since I was a baby. I can’t remember the first concert that was something I chose to go to. It seems like I’ve just always been doing it.

Does your dad give you good advice about your career?

Sometimes it can be annoying. Like, “oh, no, you don’t want to do that!” (laughs) But most of the time he’s full of good advice. He’ll give me warm-up exercises and tell me to eat my fruits and vegetables, go for a swim, take care of myself. This being a musician is a serious business, you have to take care of yourself!

What kind of music is on your iPod?

Oh, everything, really. I started with The Beatles and The [Rolling] Stones. I’ve got The Kinks and The Velvet Underground. In the 90s we all got into Brit pop like Blur, Pulp, Oasis. I was at the first Strokes show in LA.

What is touring like for you at this stage in your career? Are you driving around in a van and schlepping your own instruments?

Well, when we were with Tori we got totally spoiled. She has a nice big crew who would help us out. Now we’re back to the van, but we’re also back to playing smaller clubs which is quite nice. We can see everyone from the stage and hear them reacting to the music.

How were you treated by the fans on the Tori Amos tour? They have a reputation for being fanatically loyal.

They were very kind to us. After our set we’d go out to the merch table to sell CDs and things, and they would all come up to talk to us and tell us how much they liked our songs.

You’ve been touring or recording your record nonstop for the last little bit, do you have time to catch up with what’s going on in popular culture?

The last time we had a day off I went to a show. It’s sad, isn’t it, that when I have time off I still want to spend it in clubs listening to music? (laughs)

I wanted to ask you about that, actually, since you all live in southern California. Do you think shows like The O.C. and MTV’s Laguna Beach are accurate portrayals of teens in SoCal?

The O.C. is so close to reality that it’s disturbing to me. The other day I saw the movie Clueless for the first time, and everyone should have to watch that to see what life is like here. I went to high school in Beverly Hills, and I knew people just like that.

If you could choose one of your songs to appear on a movie soundtrack, what would it be and what would the movie be about?

The other day I saw Thumbsucker, which is the best film I’ve seen in forever. It had such a good soundtrack. So many films have great soundtracks these days. Like, Wes Anderson, The Royal Tenenbaums, that soundtrack was wonderful. But. Our music? I can’t even imagine. There are all these other movies running through my head that I can’t even think! (laughs)

“Waterloo Sunset” [by The Kinks] is my favorite song of all time, and it would be so perfect in a gloomy movie about London. But our music? No idea.

You seem to pay more attention to soundtracks than the average person.

I’m pretty obsessed with music, wherever it comes from. I’m always hearing things and going, ‘what is that? Where can I get it?’

Z sounds an awful lot like Harriet Wheeler from The Sundays, and critics have compared The Like to that band. Is that a good thing? Are you guys fans?

We’re huge fans. One time Z went through this phase where she wasn’t listening to anything other than The Sundays. She had written this song and the first time she played it for us, Charlotte and I were like, “um, that sounds a little too close to a Sundays’ song, don’t you think?” It sounded exactly like one of theirs.

You’ve mentioned a lot of really great bands, ones that I was listening to back when I was in high school, too. How were you introduced to all this great stuff?

Everything leads to something else. I read a lot of magazines like Mojo and books like Lipstick Traces. When we decided that the band going to be the main priority, we all had our reading lists!

Z is just addicted to new music and her boyfriend is very knowledgeable. He has more records than is imaginable, and he’s forever making mixed CDs with really fantastic music on them. We’re so fortunate. There’s a lot of music passed around between our friends, and someone is always hearing someone new or old and sharing it with the rest of us. Everybody has different tastes, but we’re all the same in that we love music more than anything.