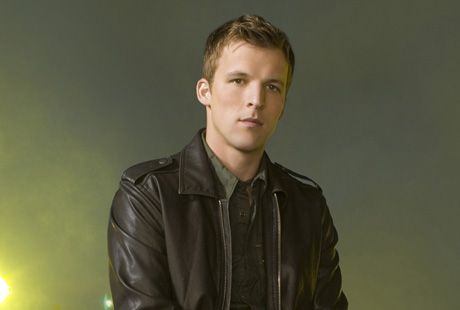 Chad Faust is relaxing on a much-needed break from shooting. In his fourth season as Kyle Baldwin on USA Network’s sci-fi drama The 4400, his role is about to get a lot bigger. With the development of his Promicin-induced power, he joins forces with Jordan Collier to bring forth a revolution.

Before the Season Four premiere on Sunday, June 17th, Chad talks to us about what’s to come for Kyle (including some nakedness!), what music gets him going and his memorable first meeting with Colin Firth.

What it was like to be off the canvas for so many episodes last season, and return?

It was very bizarre. I was working on other projects and was completely focused on them and by the time I came back around, I had no idea about what was happening in the show. Everyone was talking about this thing called Promicin, I had no idea what it was. I went in for two episodes last year – I was literally in for two days, and then out.

I felt really disconnected from it – which was kind of fun, because the character was in prison, so it was appropriate to feel like a stranger in circumstances where he’d usually be welcome and at home.

This year’s been fantastic — to get back into it with my friends again. I’m friends with pretty much the entire cast. Especially Joel [Gretsch], who plays Tom, my dad. We’re inseparable, he’s one of the closest friends I have – so to be able to go and work with my good friends is such a treat. So, going back this year has been fantastic, it’s been a really good time.

You’ve said that in the show, your relationship with your father is based on lies. How is that to play?

It’s probably my favorite storyline in the show for myself. They’re on opposite sides of a civil war but they both have this strong need for love, because they’re the only family that each another has. They’re torn between their beliefs, what gives them purpose in life and what they believe in and just wanting love from their only family members.

It’s a classic struggle to play – like career versus love or political beliefs versus love. It’s such a grand idea. It’s always going to be my favorite part of the show – that struggle between Tom and Kyle.

In last season, you were thinking about taking Promicin…

I do, I do. In the very first episode, I don’t have an ability yet, but it comes. I become a shamanistic guide to Jordan Collier [played by Billy Campbell] and together we form a revolution. It gets pretty involved. The stuff we’re shooting now – things are going to be torn upside down. Things are getting very different – it’s becoming more of a global, macro-level story and things are evolving into epic proportions.

And in your shamanistic visions, I read there is someone named Cassie.

This girl comes in and I just basically follow. At first, her prophecies are absurd — it takes me a long time to believe in the things she’s telling me that I need to do. She proves herself to be knowledgeable and insightful and clearly of my own imagination – or of some Promicin-influenced ability. And then I take on a role of blind faith, following what she says without question.

But now things are changing a little bit, the things she is asking me to do have extreme moral implications, especially for Kyle who is such a moralistic person. I’m basically being asked to do things against not only the moral code, but also the criminal code. The show almost goes beyond the criminal code because it’s so unprecedented. There’s no [legal] precedent this kind of global phenomenon so it really comes down to morals and ethics.

I have a feeling that I’m going to have some kind of fallout with them with this ability or with Jordan Collier. I don’t really know where it’s going – I get one script at a time.

If you could take Promicin and have your own powers in real life, what power would you want?

Somebody asked me the other day — if I had one wish right now, what would it be? I said to never worry again. I would really love to be able to rid not only myself, but also others, of worry. To be able to do that for others would just be one of the greatest gifts I could have and give.

I’m actually designing a tattoo around this idea. I feel like, if I could release myself from the burden of worry, [I could] open myself to creativity and love and lose the human anxiety. It really doesn’t play any role – it doesn’t help us, it just hurts us. We’re only here for a certain period of time there’s really nothing to worry about (laughs).

I don’t know yet. The only image I’ve been able to come up with, and it’s kind of tacky, is the image of a tree. A tree is so simple – it doesn’t worry, it just is. It’s one of the finest pieces of art in creation, it’s perfect. It’s so simple, it has a positive contribution to the world. It takes carbon dioxide and makes oxygen out of it. Something about the tree – but I don’t think that’s quite it.

Your Wikipedia entry has a most amusing description: Probably the only actor to play an entire supporting role in nothing more than a green Speedo, Faust battled egos with Colin Firth in Hope Springs.

(laughs) That’s right. Unfortunately, it got cut down to one scene. But I understand – how much Speedo can you take?

The script was so incredible, and it had Colin Firth, Minnie Driver, Heather Graham, Oliver Platt and Mary Steenbergen. We had a cast to die for. The director, [Mark Herman], had done The Rise and Fall of Little Voice. [It was written by Charles Webb, the novelist of] The Graduate. It had everything going for it but it went straight to DVD, unfortunately.

It was so much fun. The first time I met Colin Firth, I was in the makeup trailer with this green Speedo on. And the tissues – they tuck them underneath [as] they were bronzing my legs. And he walks in, and I’ve got all these tissues sticking out as they’re rubbing my legs down with this bronzer. Is this the best icebreaker to meet somebody that I really respect? It’s really quite perfect. He’s a fantastic human being. I really loved working with him. I don’t think I ever actually told anybody that one. (laughs)

Speaking of minimal clothing – will there be any Kyle toplessness in Season 4 of The 4400?

Oh yeah – there’s one scene, when I first discover that Cassie’s my ability. And in this next episode [we’re shooting, episode 11], Kyle finally gets a little romance. A little screen kiss from a very unexpected source. Somebody in the main cast, but not somebody that you’d expect it from.

I read that have a really soft spot for ’80s love ballads.

It just got replaced – [Dead or Alive]’s “You Spin Me Round (Like a Record)”. And the other one goes back to my childhood — Alannah Myles, “Lover of Mine.”

I don’t think I’ve ever heard that.

It’s really tacky but I used to listen to it growing up. I remember obsessing over it when I was that age, and my mother asking “What is with this song? How does this song speak to you?” I don’t know. Maybe one day it’ll have an importance in my life.

[“You Spin Me Round (Like a Record)”] — It’s a great song. It’s one of my favorite ones. Right before an audition, I like to crank that up and dance around to get out of my cerebral mind and into something more exciting.

What would be your theme song?

Aside from ’80s love ballads, what do you listen to when you travel?

I’m obsessed with Ray LaMontagne. You gotta check him out, he’s so good. It’s kind of nostalgic to the 70s, a lot of spirit to it. He’s fantastic. The James Morrison CD, I like that a lot. And The Doors.

Have you had any memorable fan encounters?

There’s one really funny one – I got this letter from this woman who said that I was capable of mass seduction. I was like, that’s kind of flattering, that’s fun.

Okay! Because I was thinking that not only was that random, but if you found it flattering – I’m a little concerned for you!

I’m so glad you asked, because if you had just printed that… (laughs)

Then Joel got a letter, obviously from the same person and she said the exact same thing to him. It was one of those moments that it’s one of those things that she said. It kind of took away from the compliment.

Were you a little disappointed?

No, no. I agree, Joel is very capable of mass seduction. I’ll give it to him.

I adapted a novel into a screenplay and these guys want to make it so hopefully it will happen next summer. I’m going to play the main character so it’s my little baby that I’ve been working on for a year now. I’m writing other scripts also – one is a collaboration, one is one of my own. I’m busy with that and I’m starting to take more meetings and getting back out there. Feeling the unemployment vibe again (laughs). But it’s good to be in a state of potential.

Property of PopGurls.com — Do Not Repost Without Permission