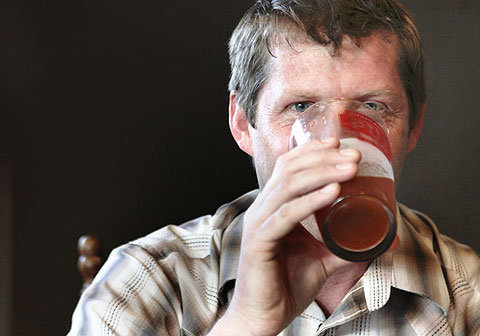 The Crane Wife is The Decemberists fourth album, but their first with a major label, and their most commercially successful to date. With songs about dead Civil War soldiers, dead girlfriends, a murderous gang of psychopaths and a dude who marries a crane, you know you have something good, if not a little strange and disturbing.

But that’s a large part of The Decemberists’ charm. They tell interesting stories in an Indie pop format with esoteric lyrics like “Its contents watched by Sycorax and Patagon in parallax”. We talked with bassist Nate Query from the latest Decemberists tour.

How is this album different from some of the past albums you have done?

I think Colin [Meloy’s] songwriting on this one is exploring some more emotionally driven material. I think people have come to know us for these shanties and very vocabulated songs, and I think that Colin’s songwriting is much more diverse, and you hear that with this new record. And the band just got really excited about flushing that stuff out with more diverse instrumentation and more instrumental sections. So it did come out a little bit different than previous records.

Colin is credited as the songwriter. What kind of work does the rest of the band put into the songs? Does he bring them in mostly composed or are they more sketches of songs?

He pretty much brings in a finished product. He usually gives us acoustic demos of all the songs that he records at home and puts on CDs before we get together in person. We show up having the song in a soloic format ready to go and start fleshing it out from there. And at that point we all sit in a room and start arranging it and sometimes some of the songs get reworked a little bit.

But for the most part they come to us as finished songs and we arrange it together. Sometimes when he brings songs earlier in the writing process there is a little bit of a back and forth in the arranging and the forming of the direction he takes it. Almost every song on this record, the acoustic version is sort of the finished product.

You play the standup and electric bass as well as the cello on this album. Are there any other instruments you play?

I do play the guitar and piano a little bit, but on stage and in front of people the electric and standup bass have been my primary instruments. The cello is relatively new to me.

Is being a multi-instrumentalist a requirement for being in the Decemberists? It seems like a lot of people in the band play more than one instrument.

Right. When the band started I played only upright bass in the band, Jenny [Conlee] played only accordion in the band and Colin played only the acoustic guitar and we had a drummer. That was basically the band in the beginning. With the first record, Jenny played a little bit of keyboards and we had Chris Funk do a little bit of peddle steel, some electric guitar, things like that. Only over time have we grown into this thing where we all play a bunch of different instruments. It’s not so much a requirement for joining, but I think that as the band has grown it’s fostered an environment that encourages experimentation and branching out in instrumentation.

I’ve always wondered this about professional musicians that are in pop groups. Do you keep practicing and taking lessons on your instrument, or is just playing with the band and rehearsing enough to keep your chops up and keep your skills progressing?

I do all that, basically. Especially with the upright bass, one of the difficult things is that it’s a very physically demanding instrument. When we are on the road and I’m playing it every night, that’s usually enough to keep me in good shape. But when we are off the road and I don’t practice regularly, I really lose my calluses and muscles.

This year, before we made this record, I was practicing cello a lot and took classical upright bass lessons and was really practicing a lot because when you go into the studio you want to be at the top of your game so that it’s less of a struggle. I guess I’m always honing those skills, and some of it’s not always progressing but just maintaining your skill level because, just like with a sport, you can get out of shape. (laughs)

With The Crane Wife you were recording on a new label. Did you have higher expectations for this album as far as getting a broader audience?

We made the record just like we would have on any label. We spent more time on it than we had on previous records, but I think we just made the album we wanted to make. Certainly with Capitol there are maybe more people working on getting it out there to people, but I don’t feel like it’s really more mainstream than anything we did before. It’s different than what we’ve done before, but I think it’s just a progression.

Are you surprised by the success of this album?

Yeah! This band has been growing at a remarkable pace over the last three years. Honestly, I’ve been pleasantly surprised at our success at many points along the way and this is no different. It feels like the album is doing great, getting great reviews and that’s just really exciting because you don’t have any control over any of that. All you have control over is the music and the show, so it’s pretty exciting when that stuff works out. I’ve been on the other end of it too, and it’s tough to make a living as a musician. So it’s exciting when it works out so well.

Some if the songs on The Crane Wife are sort of epic and conceptual, like “The Crane Wife” and “The Island” and others are more popish, like “O Valencia!” Did you guys make a conscious effort to strike a balance between those types of songs?

Well, I think we’ve always struck a balance. I think Colin’s songwriting tends to run in both of those directions. Our first record had “California One” and “Odalisque”, which are more epic, longer songs and also had “Here I Dreamt I was an Architect” which is just a short pop song. This record is no different in that sense. We did record over 90 minutes of music before we decided what would be on the record. I think we’ve tried to strike a balance, but it doesn’t really feel like that big of a stretch. Certainly it goes in a lot of different directions, but I feel like it’s a fairly cohesive unit.

I agree completely. It has a similar sound all the way through. Even the longer songs – the way they are broken down into three songs each, each with their own sound.

And a lot of that was Tucker Martine and Chris Walla, who are such great engineers and producers that they helped give the album a consistent sound throughout, even when we are going in such diverse directions.

So when Colin brings in a song, do you ever break out any reference materials, or do you ask him what’s going on and what it’s about? He throws in some crazy words and references.

(laughs) Maybe a little bit of both. I’m a little bit lazy about looking stuff up so I usually ask him or somebody else what a word means if I don’t get it. Sometimes, if there are a lot of songs at once, I just go with it and figure it out later. (laughs)