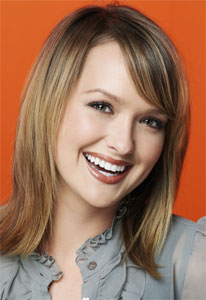 Google Kaylee DeFer and one of the first hits you’ll get would make her The War at Home character proud. But talk to her for a few minutes about her reaction to her mother finding pictures of her “nip slip” and you’ll find she’s far different from her parents-shocking, Kelly Bundy-ish counterpart.

With a couple of series under her belt (The War at Home, The Mountain) and a supporting role in this fall’s Flicka, DeFer is primed for great things. And she sounds like a pretty fantastic person to hang out with… just watch your quarters around her in the arcade.

You’ve done a lot of musical theatre – what’s the biggest difference between performing in theatre vs. television?

I think that performing in front of a live audience on the show is as close to theatre as you can get in Hollywood. The best part of musical theater is that there’s no messing up – you can’t yell cut, you can’t re-roll – it’s all live and all talent.

My biggest challenge with film and television is memorizing lines (laughs). I’ve never been good at it, ever. I’m so bad. I just have to do it over and over and over again.

I read that you wanted to enroll at the Royal Academy of Dramatic Art in London to study Shakespeare. What role have you always wanted to play?

There’s always the classics, like Juliet and Desdemona from Othello, but one of my most favorite plays is A Midsummer’s Night Dream. I used to read that as a little girl – I had a picture book of it and I thought it was great with the fairies and the magic and the romance… every girl wants to be fairy princess.

Speaking of romance, how many love interests has Hillary had on The War at Home?

I lost count – there’s been so many! [In a recent episode] Seth McFarland, the creator of Family Guy, is guest-starring. he plays my older love interest. It’s probably one of the most controversial shows we’ve done.

Aren’t a lot of your episodes controversial?

Wait ’til you see this one. (laughs)

You’re a video game fan. Have you ever thought about hanging around video arcades and swindling 14 year olds out of their lunch money?

That’s something that I used to do back in Tucson – there’s not a whole lot to do there for young kids. So we would meet up and go to Golf N’ Stuff, it’s a Tucson thing – miniature golf, arcade, laser tag, ski ball, bumper boats. We spend a few hours there at night and play video games. But I didn’t steal any kids money! (laughs)

I’m a fan of the racecar driving ones – there’s not much to think about. I’m not good with the buttons… “A-B-doubleside-right-left-left-right.” (laughs)

I’ve heard so much good stuff about that, but I’ve never played it.

You can battle, but they don’t sell two guitars in one package anymore. You have to order it online – I’m thinking about investing in my second guitar…

How often do you karaoke?

I wouldn’t say that I karaoke often, but I always have a great time when I do. I think I might be going to a karaoke party this weekend.

Really? Do you have something prepared?

My friend and I have decided that we’re going to sing “Suddenly Seymour” from Little Shop of Horrors.

That’s a great choice! Do you have a fallback song?

Yes, “I Can Show You the World,” Aladdin and Jasmine style.

What is something that you can do really well that people would never suspect?

It’s not strange, but maybe people wouldn’t guess it – I play piano, and I sing and write music. That’s probably something that no one would assume. It’s kind of jazzy, more folk. It’s older – you can tell I have a strong musical theater background.

Do you ever perform your music out, or is it your own thing for now?

It’s my own thing. There’s the whole [trend] with the crossover actresses – going into singing music. Because it’s my creation and something that I worked really hard on, it’s something that I want to be absolutely mine… not influenced by other people or pop culture because it’s easy to sell.

What’s your favorite musical pick-me-up? Like, the song you blare in your car while driving around and sing along with.

I wouldn’t say that there’s any one song in particular – most of the songs like I like to belt out are more sad than happy (laughs), but therapeutic nonetheless.

Man, that’s a great question. You know, there aren’t any girls hardly ever on the show. I think it would be fun to get Jon Favreau in a room of female actresses and performers. There’s always four guys, and if, at all, one woman.

I’d say Toni Collette – I’d love to sit down and talk to her. Carol Burnett – she has one of those minds I’d love to pick. Claire Danes – she has that kind of past that you’d love to have coming from a TV show, and moving on to such a successful career.

If you were going to be a superhero for a day, what would your powers be?

Flying is the general thing that would be amazing – I think that would be so much fun. There’s not a lot that you can do with it, but for selfish reasons, flying.

What show was that, I think it was on Nickelodeon – she was doused with chemicals?

The Secret World of Alex Mack?

Yes! Alex Mack! That would be cool. She could turn into liquid and slide under a door.

If someone was going to write a comic book about one of your adventures – who would it be? Who would you take along with you?

I would have Kevin Smith write it – he’s phenomenal. And who would be my sidekick? Well, my sidekick in real life is my brother, Link. So probably Link.

Link’s a good name for a sidekick.

Yeah, right? Even the name’s good!

What would be your adventure?

I think because it’d be a Kevin Smith comic, it’d be set in one small town and deal with the small town dramas. Maybe take place in my hometown, Tucson.

Downtown Tucson, there’s a place called Hotel Congress that is awesome. It’s a good spot because there’s food, there’s a hotel and at night it turns into a bar. Right next to the Greyhound station.

I love Chasing Amy. I love Clerks and Clerks II – I actually got to go to the Clerks II premiere.

At the premiere for Flicka, it was at the Arclight, and Kevin Smith was waiting in line to see a movie. I stopped him and said “I didn’t even get to say hi to you at the Clerks II premiere, but I’m obsessed and I’m a huge fan.” I was making a total ass of myself and he said, “Well, that makes two of you – you and my mom.” (laughs)

So, if you Google your name, some of the first hits that come up are about a certain wardrobe malfunction…

You mean the nip slip? (laughs)

Yes! It seems to happen to a lot of actresses at least one point in their lives. Were you able to easily laugh it off or were you really embarrassed?

What’s funny is that [picture was taken] way before I had done anything. That was way before Flicka was filmed, before the pilot was filmed for The War at Home. I was at Sundance supporting my friend’s movie and my friend’s dad was doing the yoga house. In the yoga house, there was all this organic stuff there and there was a designer named Linda Loudermilk who is an amazing, amazing designer. She takes all organic materials and vintage materials and uses them in her garments. The dress I was wearing – I think she said it took 4 months just to make the fabric because it was made of silver thread. She looked at me and said, “I think this dress would fit you perfectly.” Of course, I wasn’t prepared to be modeling anything and she asked me to wear it around the house for the day and of course, I’d love to, it’s a stunning dress!

So, they got me in the dress and they didn’t have any topstick, so I was trying to be careful. But one of the reporters was making me laugh… I was completely unaware of the entire situation until my mom gave me a call a couple of months later and said, “Oh my god, Kaylee! You’re naked all over the internet!”

My mom completely blew it out of proportion and I was terrified, thinking I was nude. Like, I was changing somewhere and the paparazzi got a picture of me. I was freaking out! Then I went online and it was that – so, when I found out it was just a nipple slip… most girls would be completely horrified but I was terrified that I was nude. So it wasn’t as bad as I thought it was going to be. (laughs)

The sad thing was, it was one of my brother’s friends who found it and called my brother. And my mom found it – it’s just like this crazy cycle. It’s embarrassing and there’s absolutely nothing I could have done to make it go away… it happened and it was definitely not happen again! I carry topstick with me, I carry it all!

Well, the comments I saw were all supportive. People seemed very impressed with your perkiness.

(laughs) Well, let’s hope they stay that way for a little bit longer! At least they’re perky, this could have happened to me a few years down the road after having a few kids.