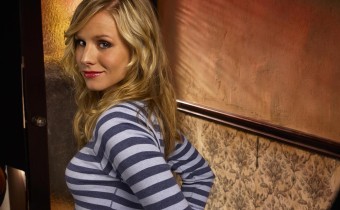 Kristen Bell stepped off the Broadway stage and onto the small screen to play the star of UPN’s Veronica Mars, the very smart and very snarky show which many have compared to Buffy the Vampire Slayer. (The first few seasons, when Buffy was still appointment television, of course.) She is flattered by the comparison. “I think that’s something that Rob [Thomas, the creator and executive producer] intended for it to do, and it has. It’s fabulous. It’s definitely in that vein of that strong female heroine of Buffy or Alias, and I hope that we’re in that category. The great thing about Veronica is that there’s much more reality involved. So for people watching it, there’s less to suspend – she’s not fighting vampires, she’s fighting the cool kids of high school.”

For those who still haven’t seen Veronica Mars, Kristen quotes Thomas as saying it’s like Twin Peaks meets The O.C. and Dawson’s Creek and rolling it all into one. She adds, “I would really have to say that there’s not much like it on TV right now. I would put it in the category of Teen Drama, but much smarter and much darker than anything I’ve ever seen on television.”

Does it bother you to be labeled a cult hit?

Kristen: To be totally honest, I think that’s the best way to start out of the gate. We knew what we were going into, having it air on UPN. They’ve been phenomenally supportive as a network and I think they’ve really done right by the show and made some really great choices with it. It’s a cooler way to come in, like an [under the radar] indie film instead of a blockbuster that is advertised everywhere, and all of a sudden have a lot of people realize “Hey, this is a great show that I haven’t been watching? I’ll check it out!”

Is it difficult being the titular head of Veronica Mars? Has some of that pressure been diluted due to the fact that the show obviously has a strong ensemble?

Kristen: In the beginning, [the press] was centered a lot around me and the ensemble didn’t do much at all. Now, once a month, we do a mall tour where we go to a different city and do a big signing and the whole cast is there. That has a much more ensemble feeling and that takes a lot of the pressure off because you’re going as one.

Not only is Kristen the lead, but basically the only girl in a sea of testosterone – but it doesn’t seem to phase her. “The boys – they’re all fun. Percy [who plays Wallace] is hysterical and Teddy’s the same way. Teddy [who plays Duncan] is so sweet, and I love watching Jason [who plays Logan] act because he’s such a good actor and there’s so much coming up for him in the series and as an actor, I’ve learned a lot from him because I’ve just been able to watch him and he’s so intense. Francis [who plays Weevil] is awesome and hysterical. I think we’re lucky because there’s not a bad egg.”

Plus, Kristen always has Enrico Colantoni, who plays her father, in her corner. “Rico is probably by far my favorite because we have a lot of stuff together every episode – more so than I do with any of the boys. He is one of the most generous individuals I’ve ever met and has taken on the role of father in my life. He’s super-concerned for me about things and he’s always asking how I am and if I’m okay. I feel like someone has that watchful eye on me; comfort and security – he really has that. We also get along really well. Our sense of humor is the same so we just laugh all day. He’s a wonderful, wonderful man.”

You’ve gone from Broadway, where you get to hear your audience’s reactions every night, to a weekly television show, where audience reaction is judged in ratings points and online fansites. Has it been a culture shock? Do you miss that immediate response?

Kristen: I absolutely miss that immediate response, but I don’t think that once you’ve had that as a performer, as an actor, you never get that euphoric feeling unless you’re back up on stage. I love film and TV. But there’s nothing like theater. Theater is definitely number one in my life and I want to go back. Although there is something to be said for seeing the fansites.

Ratings, I don’t pay much attention to. In New York, if you believe the good reviews, then you have to believe the bad and I sort of feel the same way about the ratings. But it is nice to go on the fansites and see how much effort people have put into them, and the comments, and how into it people are, because in the way it’s the same thing.

What was it like transitioning your stage role of Mary in Reefer Madness to the Showtime’s screen adaptation? What advice do you think Veronica would have for Mary, and vice versa?

Kristen: It was exactly the same. Same director, same writers. There were a few cast changes, but for the most part it was exactly what I did on stage. Which was really cool – that nothing had to be adjusted – because we felt that we had perfected it on stage.

Mary has advice for everyone: That’s the reason that no one likes her. There are just those perky people that want to tell you everything. Mary’s advice for Veronica would probably be about flowers and bunnies.

Veronica would have zero tolerance for Mary, because Mary is vomitously perky. And Veronica would not tolerate that for a second.

Kristen got to show off her musical theater chops off-Broadway in Reefer Madness, but only time will tell if she gets to properly showcase her voice on Veronica Mars. In her off-time, Kristen enjoys an escape to the local karaoke bar. “I can rock out anything,” she says. I mean, I can rock out a little ‘Time After Time.’ I can do a little ‘Greased Lightning.’ It depends on the mood, but we do go karaoke – my friends and I in Los Angeles – and it’s a lot of fun.” And that humor is something that Kristen hopes to cultivate more onscreen. “I look up to a lot of female comedians, like Catherine O’Hara, or Toni Collette, or Jennifer Coolidge. That whole Christopher Guest crew, I really adore. Comedy is so hard. So much harder than drama. It takes so much charisma and so much to grab an audience and keep them involved and respecting you when you’re female and a comedian.”

If you could take Veronica into any other television universe for a day, what show would she wreak havoc on and why?

Kristen: That’s a tough one. I’ve never seen it, so I may be speaking out of turn, but just from what I’ve heard, I might have her go on The O.C. and have her knock a little reality into them.

If you were on a baseball team, what nickname would be embroidered on the back of your jersey?

Kristen: [As] Kristen, it would be K-Bell because that’s what all my friends call me.

[As] Veronica, it would probably be Verne because there was this point in the show where somebody said, “Hey Ronnie,” and we had this big joke – I said to the writers that if you give me a nickname, it’s not going to be Ronnie, it better be Verne.

Perhaps it’s Veronica’s inner Verne that has been coaxing her through some emotional and mental growth as the series progresses. “I think Veronica’s closer to discovering what will satisfy her, and I think that she knows it,” Kristen says. “In the beginning she was sort of blindly determined, and now she’s focused, which I think helps her on the inside a lot, knowing that now she’s out for one thing and one thing only, which is finding out who killed Lilly. Before, there were a whole bunch of possibilities, and now she’s honing in on them which I think is changing her and allowing her to get stronger, because she’s more focused.”

When asked about Veronica’s paternity, and potential incestual issues, Kristen says that “the incest issue will be dealt with either way – whatever the outcome, it will definitely be addressed more. The next three or four episodes will help you out.” Secrets are certainly the name of the game on Veronica Mars, from Lilly’s death and the disappearance of Veronica’s mom, to the high-profile and very cool guest stars that pop up on the show (keep your eyes peeled for a big announcement around January 19th). Kristen enjoys the mysteries, but finds that working on a show with a “Who Killed Laura Palmer?” type question isn’t always as fulfilling to her curious mind as she’d like. “When I see a mystery, like a movie or a TV show, I want to know the details. So I figured when I got cast that I would be able to have all the inside info and know what’s going on, but I really don’t. They don’t tell me anything. It’s just as frustrating as being a viewer being on the show because I really only know details two weeks in advance – I don’t know who killed Lilly. But I do like mysteries a lot, and what I think is cool is that it’s fun to see the intelligence behind it, in a script, to see, ‘Oh my gosh, THAT’S how she pieced it together.'”

Veronica is a sassy, straight-shooting girl that finds ways to get the answers she wants. If you could ask everyone one question, and they’d have to answer it honestly, what would it be?

Kristen: Ooh. I’d probably throw out a general one and see what comes out of their mouth. Just to cover all bases and to see what guilty secrets people haven’t told me. [laughs] I think that’s a good way to get the truth out of people – just act like you already know. “Look, just tell me the truth” and see what happens.