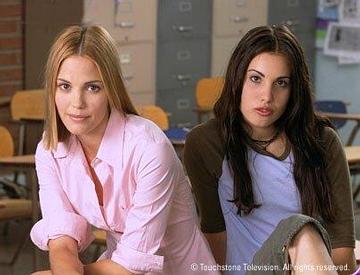 Written by Brad, Amy
Brad: Several weeks ago, I sat in horror during the season/series finale of Popular. The producers either wanted to screw everyone who watched the show, or they didn’t expect it to be canceled at the end of Season Two. I have to say it makes Angela Chase leaving poor Brian Krakow standing alone in the street at the end of My So-Called Life look like a joy ride. A love fest. It was totally inappropriate in every way and an assault to the senses. It was like if George Lucas had ended the Star Wars trilogy at the end of Empire Strikes Back, except with the last scene showing a bitter, drunk Darth Vader running down Luke Skywalker in his expensive car.

I could go on about how the episode totally left out a half-dozen major and minor characters as well as just being a drag to watch. I will say, though, that the episode symbolized Popular’s rocky second season – which ruined this potentially great show.

Before it hit the air Popular was promoted as a show about the rivalry between the beautiful, blond and popular Brooke and the less popular, brunette Sam. Since Sam was beautiful herself it looked like another lame-ass, unrealistic portrayal of high school on TV. What no one at the time realized, however, was that the heart of the show wouldn’t lie in Brooke and Sam, but in a psychopathic Texas debutante named Mary Cherry. She and her uber-bitch best friend/arch-rival Nicole weren’t necessarily the center of the show, but they made up the core of the whacked-out, left-field shit that separated Popular from its peers. When Mary Cherry asks a runaway living in a stall in the girl’s bathroom (a.k.a. the Novak), “Is there anyway that I, Mary Cherry, could also become filthy teen trash like yourself and punish my mama?” in order to derail Cherry Cherry’s wedding to Erik Estrada, you know you’re on to something special.

Of course, all this wackiness was accompanied by “real” storylines involving topics like adolescent sex, peer pressure, self esteem… blah blah blah. Did I tell you about Mary Cherry? She sure is funny! To be honest, though, the true art to Popular was how the writers managed to balance topics like teen pregnancy with hijinx like Mary Cherry and Nicole kidnapping and torturing Gwyneth Paltrow’s personal shopper. This unholy combination reached a fevered pitch with the no-holds-barred first-season finale. A spoof on season finale clichés, the episode was to end with the marriage of Sam’s mother and Brooke’s father as the conclusion of a season-long story arc. But in true Popular fashion the episode also involved the murder of science teacher Bobbi Glass – whose finger gets chewed off by a cat, has an autopsy that reveals she literally has no heart, and has her funeral at the same time and place as Brooke and Sam’s parents’ wedding, where she is suddenly brought back from the dead (by none other than Mary Cherry and Nicole!). Oh, also, super-spaz May Tuna dies from eating her regular diet of dirt, and there is a musical number. Comedy gold!

Tragically, the writers lost their mojo in the second season. The artful balance of serious and wacky was thrown way off with story lines trying to be TOO serious, like lovable and funny Harrison’s battle with leukemia, the chemistry-less couple Josh and Lily’s experimentation with drugs (some lame-o cough syrup cocktail, WTF?) and Bobbi Glass grappling with her sexual identity. Not only was it lame, but preachy, too. It’s hard to have a “very special Popular” when Ms. Glass goes by the nickname “Claw” because of her pointy, metal prosthetic finger.

So I lost a bit of interest, would forget when it was on and kind of stopped watching for a while. So did everyone else, I guess, because Popular is no more. It found its balance with a few episodes this year, but not enough to save it. Now we’ll never know if Sugar Daddy finds love with Exquisite Woo, Carmen gets her shit together, Emory Dick and April Tuna become more than just spazzed-out nerds, or if Luke survived Darth’s spite-filled, drunken driving.

Amy: I, like the Brad, became quite hooked on Popular towards the middle of the first season. When I first saw the pre-season promos it looked like an interesting idea, but things kept getting in the way and I’d forget to watch it. Then The WB started their brilliant idea of mini-marathon repeats on Sundays. I caught up on all the Populars I’d missed and almost immediately fell in love with Nicole and Mary Cherry.

That’s not to say that the other characters weren’t enjoyable either. I dug the Harrison-Sam vibe and even giggled madly at the inane ramblings of Miss April Tuna. Carmen was a refreshing change, as a character on a teen “drama” that actually has well-deserved self-esteem. Even Bobbi Glass (Sir, Ma’am) managed to hold that maniacal teacher status without becoming too sensational. Brooke always annoyed me, but I think she pulled off the teen-queen-with-everything role well.

Without repeating everything Brad says, I must agree that it’s those first two charactersthat made Popular stand apart from the crowd. Nicole is so deliciously malevolent that even her moments of “nasty gurl with a heart of gold” can’t break down her thorny shield. And Mary Cherry is just… well, Mary Cherry. I’ve sat here trying to define her, yet I can’t seem to come up with anything that would be adequate, much less do her any sort of justice.

The show was a constant parody with an underlying “message.” The first season, it worked. The second… well, I’m convinced that The WB once again stepped in and tried to change a formula that was already working (Roswell, case in point). What happened to all the spoilers the producers were so excited about? A nine-month pregnant cheerleader (Carmen)? An openly out character (Lily)? Gone, gone, sweeping first-season finale cliffhangers under the carpet with a throwaway line. That alone should have alerted fans that the second season did not hold in store the same brilliance that the first did.

But even with the lame plotlines, the show picked up speed in the last few eps. I recognized the characters I’d once loved and remembered why I had tapes upon tapes of the show. And then came the season finale. Talk about ripping my heart out – I truly wish I had seen the show with Brad so I could commiserate. Instead, I sat on my couch with my jaw dropped open, whimpering in unresolved agony.

Car accidents. Love triangles. And an actual, realistic look at how high school marriage may seem all sweet and romantic, but in most cases, it can be a living hell. All unresolved. Bastards.

A few days ago, I found an interview with one of the producers who spilled what would have happened next season. And, as much of a spoiler hound that I am, it wasn’t enough. I want to see it played out – I want to experience Mary Cherry’s (and her separated-at-birth-twin-sister, B. Ho’s) inanity first hand. I want to revel in Nicole’s evil plotting and cross my fingers, hoping that Brooke would finally see what it’s like not to be the “chosen one.” And I want to see Carmen get what she wants – someone to love her back and stick around.

None of that will I get. Bastards.

So, I shall remain heartbroken for a little longer. I shall mourn the passing of a show that fluctuated around the line of being fabulous – hitting the mark so many times, but sinking down for too long when it most counted. I think, above all, I’ll miss the humour. No one can convince me that there are more gut-busting images than Mary Cherry’s face taking up the entire screen as she lipsynchs “I like big butts and I cannot lie.” Or that anyone can take down their opponent in a verbal sparring match as wickedly as Nicole. And then there were the mullets…

The line that hooked me in the pilot was a brilliant taste of Popular‘s potential: “Cancel my subscription, I’m over your issues.” Consider this a subscription canceled too soon, when there were so many more stories left to be written.