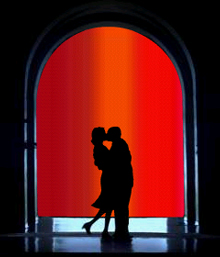 I’m sure you’ve all read the reviews of Punch Drunk Love. Heard the praise. Oooh-ed over the prestigious awards the movie won. Or award. I can’t recall. But what do all the reviews and awards and praise add up to? A whole lot of nothing.

Though fairly short, this movie dragged. I swear my butt was as numb after this movie as it was after Lord of the Rings, and that’s saying something. First off, there are some very odd, very long shots in the first 10 minutes of this movie that made me wonder if I’d drifted off to sleep and missed something important. The beginning of a movie’s important, people. It should draw me in, not leave me dazed and confused. For instance, I have no idea why a minivan took a spectacular dive, crashing into the street and then disappearing, nor why a taxi minivan, following close behind, dropped off a minuet on the street as Barry (Adam Sandler) watched. Nor what any of this has to do with the rest of the movie, even though Barry did attempt to play the little broken minuet quite often. It was all just a bit too odd for me, especially coming after the long scene of nothingness that opens the movie.

Odder yet are the parts of the movie I know I was awake for, but wish I wasn’t. It’s not that it was evil or inhumane, just off. I hate feeling uncomfortable for people. Hate it. Barry has issues around people. Let’s put it this way: he’s not a very sociable guy. He doesn’t seem to have anyone to talk to but his seven sisters and their significant others, who don’t seem all that thrilled by Barry’s presence. At one point fairly early in the movie Barry calls a phone sex line, just to have someone to talk to. All of a sudden, a movie that I thought was a quirky love story is now a phone sex fraud movie involving Georgia Peaches, blackmail, and four very sad looking toughs from Utah. Oh, and Phillip Seymour Hoffman, who runs the business then instructs his people to extort money from the clients, because they’re pervs anyway and that’s what they get for calling a phone sex line.

For the record, I’d like to say that this movie is falsely advertised, thanks. I went for a quaint love story! I went for the joy of seeing two kooky misfits meeting and falling improbably in love. Not for Barry to travel to Utah after the four toughs try to hurt him and his girl to confront a greasy Phillip Seymour Hoffman. Parts of it were a love story, but not a very compelling one. There’s just not a whole lot of action or reason. There are many long, long shots of people standing still or running down halls or pulling money out of their ATMs at the “request” of the four young toughs and then running pell mell down alleys, and there’s not nearly enough shots of Barry beating up bathrooms, (Barry’s words, not mine) or interacting amongst people without hugely awkward pauses. But if that’s your cup of tea, I highly recommend this movie!

If not, I can’t really suggest you see this. Sure, it was funny to see Barry kick his sister’s glass windows out in anger, and I really felt for the little social miscreant growing up with seven sisters like that, but we were never given any reason for his behavior. Other than his seven sisters, which could be reason enough. He’s a businessman, but an odd one. He seems to have started a “funger” company, which makes and sells “fun” themed toilet plungers. He buys a blue suit, that may possibly be velvet, and wears it the entire movie. Sometimes he cries. And for some reason, Emily Watson’s character sees a picture of him and decides she’d like to date him.

So in that respect, it was sort of romantic.

Also, I know people are praising Adam Sandler’s acting, saying he’s really broken out of the Adam mold and showing some true acting talent. I may be in the minority here, and I may not have spent four years in school learning how to dissect films, but I have watched a good bit of SNL and various Adam Sandler movies, and I can honestly say that I saw no difference. He may have not been the overt goof from Billy Madison or Happy Gilmore, but his Barry Eagan was just one more funny-voiced, whacked out character he might have played in a five-minute skit.

Which, come to think of it, might have been all this movie needed. To be condensed down into a five-minute skit, minus the phone sex drama and the sister drama, and instead focusing on two people who don’t do well around other people, but seem to click together.