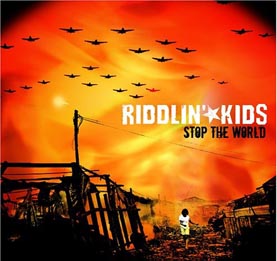 A recent article in Alternative Press magazine focuses on Simple Plan’s knack for not only creating chart topping pop-punk, but also America’s desire to hate them for it. Now, I’m not that big of a fan of Simple Plan, but I am a fan of good ol’ pop rock music, and why should that be a bad thing? Sounding nothing like Simple Plan, The Riddlin’ Kids broke out into the Austin music scene a couple of years ago with a blast and immediately garnered an extremely loyal fan base.

RK’s first album Hurry Up and Wait was an incredibly fun album that I defy any fan of rock to listen to and dislike. I couldn’t stop listening to it, on loop at times – it was the first time that I liked every song on an album and never tired of a single song – no matter how many times I heard them. The album made you excited, pumped up and ready to go out and do anything, encouraged at every turn by the infectious hooks and melodies of Clint and Dustin, and the powerful, ever present rhythms of Dave and Mark within each song. In every song, you can hear exactly how well these four guys were able to come together to create a vibrantly unique style, which sets RK apart from other bands.

The Riddlin’ Kids’ sophomore album, Stop the World is riding on the wake of the success of their first release Hurry Up and Wait and the immensely popular single, “I Feel Fine.” Like many bands before them, they arrived with flare, quickly realizing the key to creating fans was their live performances and soon became known for providing extremely energetic and fast paced show. Comprised of four members – Clint Baker singer/guitarist/songwriter, guitarist/vocalist Dustin Stroud, Bassist Mark Johnson, and drummer “Metal” Dave Keel – they set out with goals to change the world rather than stop it. But bouncing off the success of their first release like many of their pop-rock comrades, the band was posed with the question: What do you do for an encore? The Riddlin’ Kids’ answer? Break down your love of different types of music, experiences gained through touring and being out on the road for over two years straight, learn from successes in the past, and finally add two parts hard work to the mix to create a catchy group of songs with a great sense of pop precision while still rocking out harder and faster than your last album. And it worked too.

Already being a fan of the Riddlin’ Kids before writing this review, I knew what to expect, but I still hoped I would be surprised. To be honest, when I first started listening to Stop the World, I was unsure about it – I liked it but it didn’t sound like the prior album and I wasn’t sure how I felt about that. After all, I’d spent three years with the same songs and by now they’d been burned into my brain. However, just over halfway through the album I realized that I’d been listening and liking what I heard without any uneasiness at all. While Clint and Dustin’s melodies and Dave’s chords and Mark’s powerful beats weren’t out front as they had been, their style has matured in such a way that their music has become more complex. The tracks on the new album showcase Clint’s versatile voice, and they use harmonies to reinforce the lyrics and the music in ways they didn’t before. Once I got over that initial shock from the different styles and actually listened to the music, I realized that the elements I loved – the things that made RK stand out are still there. The underlying style is still without a doubt the same, however, their abilities and understanding of music have grown and that growth translates into a more complex sound.

With their greater understanding of their craft, they have integrated their unique sound with various other styles. Perhaps, it’s better to say that the RK style has evolved or matured in such a way, that they are now able to create music of any sort of genre of rock while still maintaining the earmarks of the Riddlin’ Kids. They wear their influences proudly – “Stop the World,” the first single, serves up a bit of Stray Cats rockabilly while “Apology” kicks off with a country twang. “Never Live It Down” is a head-bopping, toe-tappin’ that I can never sit still through. And “I Want You to Know” is quick becoming a fan favorite with its melancholy lyrics set to catchy harmonies and driving beats.

Over the past few years, the lives of the guys who are together the Riddlin’ Kids have changed immensely, and this is reflected in their album. Stylistically, this album reflects how the intense immersion into the rock pop culture has been not only the fulfillment of a dream, but also a learning experience that has helped them to develop a broader range and diversity in style. Thematically, the songs are more varied due simply to the fact that the events in their lives, which shaped and inspired the songs were different from those of the previous album. The songs “Revenge,” “Turn Around” and “Ship Jumper” were created out of deep frustration, rage, disappointment which arose after the group’s manager, tour manager and road crew all quit suddenly, abandoning them mid-tour. Their fury is felt in the heavy drums and passionate vocals. While the guys aren’t happy about the incident, they do look on it as having some positive effects; the most important of which is that it created a situation with tensions so high that any and all issues came out and were talked over, resulting in a more excited, focused, forward looking attitude within the band that has come across into their shows. Perhaps Clint explains the attitude of the guys at this pivotal point best, “At the same time that everybody jumped ship, there was just a lot of tension all the way around. Finally, we said, ‘we love this band and people might be leaving us left and right and might not believe in us, but screw them… we’re gonna have to go back and write a new record, write the best record we can and conquer the world.'”

And with Stop the World, they’re well on their way to total domination.

Fans of the Riddlin’ Kids: Definitely get this album, you won’t be disappointed. But be warned it is not a carbon copy of the previous album; they’ve matured and so has their music, but fear not. This album is every bit as fun and enjoyable as the first.

New to the Riddlin’ Kids: Definitely look deeper into the group and the album; if you’re still not sure about getting the album and want to be absolutely sure before getting the CD then go to riddlinkids.netfor a preview of songs. Then once you realize you love this band, go out and get both albums – you won’t regret it.

In General: The second album of the Riddlin’ Kids, Stop The World is really great! definitely something to look into. It shows a maturity and complexity that the prior album lacked, and that the band is, justifiably, really proud of.