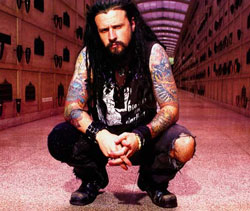 Who, oh who, can resist an album that begins with someone’s holier-than-thou grandma preaching, “Sin, sin, sin. You’re all sinners. You’re all going to a painful, everlasting, fiery hell!”

Yeah, Zombie’s back. And if you thought he wasn’t peachy keen enough for PopGurls, someone’s teeth have already been sunk into your brain. Look deep into his eyes and crank up his latest offering, The Sinister Urge. Then tell me Herbal Essences even knows the meaning of the word.

With tracks like “Demon Speeding,” “Transylvanian Transmissions PT 1” and the 30-piece orchestra-backed “Bring Her Down (To Crippletown),” there can be no doubt the Zombie has risen once more to deliver an eerie earfest of horror-infected show tunes.

“Dead Girl Superstar” is my favorite ditty off the album. It’s that rare tune to which you could do both a booty-shaking little striptease, as well as kick someone’s teeth in. It’s a unique song indeed that has the ability to evoke two such distinctly opposite desires. I deem it magnificent.

In what I guess is an homage to Kubrick’s classic A Clockwork Orange, Zombie vows that he’s “Never Gonna Stop (The Red, Red Kroovy).” That’s Nadsat for blood to anyone unschooled in the talk of Burgess (Anthony, that is). It’s a dancey little number, perfect for a night out with the droogs in search of a bit of the old ultraviolence.

“Iron Head” has received much publicity, due largely to guest vocals by Ozzy Osbourne. It’s a fab song, truly worthy of love and renown, festering with its purist Zombie brethren “Scum of the Earth” and “Feel So Numb,” the album’s first single. They ooze classic Zombie, the likes of which forces you to do the evil things your mother warned you against. Like leaving the house in shoddy undies. What WOULD happen if you were in an accident? You don’t care. And Zombie would nod in approval.

Take two parts Zombie and a jigger of sunshine and you’ve got “Go To California.” Set off by a quick Middle Eastern-sounding intro, followed by a mescal-laden Margaritaville-type jingle about some hot blonde beach bunny, it’s a cautionary tale of an aspiring actress, murderess, or both. (Murderess sounds so much more ethereal. Almost like empress. Anyway…) This chick is in Hollywood (I think) and no one really knows or likes her, but it’s ok, even if she is a killer, because she’s pretty and willing to get naked. Typical. Fuck ’em up, blondie!!

Last up is “House of 1000 Corpses,” a track with the same name as Zombie’s unreleased (damn show biz bureaucracy) movie. The samples on this one are downright creepy. The song itself is, well, hilarious. It’s a twisted little tidbit about a seemingly functional family of cannibals, book-ended by news coverage of the events at their house. I can only hope that the movie is everything the all too brief song suggests it will be. I should probably wear a diaper to the theater. Does Huggies make thongs?

I have to say, I love this album. It hasn’t left my stereo all month. And the more I look at the pictures of the band, the more disturbed I am at the discovery that their dirty, creepy façade does it for me. Drummer Tempesta, bassist Blasko, guitarist Riggs and Zombie himself managed to satiate my cravings (musically, at least).

In this day where pathetic, mind numbing crap is disgustingly, irreverently tossed into the genre of metal, Zombie is a breath of gloriously putrid air. In his entire album, make that career, nary does there appear a whine about how his parents fucked him up, or gave his brother the bigger piece of cake. All he wants is for you to get out there and shake your asses proper. You hear?