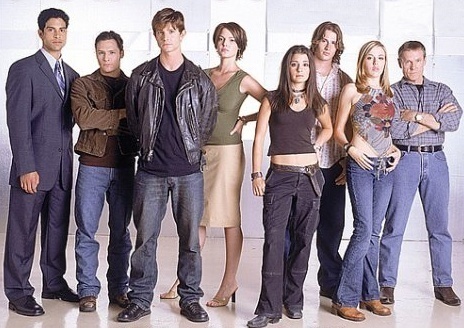 You’ve read, we presume, how Alias did things right? We take you now, gentle readers, to the other end of the spectrum and detail how Roswell went very, very wrong.

First off, there was very little right about this episode. Ignoring the fact that it basically ignored three years of storylines, the pacing was horrible, the writing read like some horrible fanfic writer’s wet dream and the actors couldn’t even pretend they wanted to be there, there were two extended scenes of Max and Liz making out. I’m still recovering.

Once we shake those horrific images, along with their witty repartee, out of our minds, we could ask how a show that started out so promising ended this way. We could curse executives, writers, a producer that couldn’t let go of My So Called Life and the actors. But it’s not worth it. Really. We could rehash the last few episodes of pain, wherein they redefined the word “half-assed” in their haste to clear up as many plot threads as possible in as little time as possible. Welcome back Te—oh, bye Tess. Instead, let’s focus on the final episode. Because it pretty much personifies everything that ever went wrong with Roswell. And that’s saying a lot.

The Plot Continuing Roswell’s glorious tradition of ignoring everything that’s come before, this series decided to give Liz clairvoyant powers and send everyone off together in a van. I’m not kidding. Three years of Alien King angst, unrequited love, random bad guys and clones, and they choose to end it on a completely new storyline. Could we wrap up the Dupes storyline? The Skins? Interplanetary conventions on earth? The memories of their past lives? Brody? Has everyone else but me been able to erase the memory of Maria wanting to marry Brody and care for his daughter out of their minds? If so, HOW did you do it? Help a gurl out. Sean? My god, where was Sean? He broke into a bowling alley and took Liz sock bowling! He showed us that Miss Parker actually had a personality once she got out of the 5-mile-Max radius. Come on, people! Give us someone to like! Ahem. I digress. Ignoring the glaring absence of Sean, a travesty, we’ll have you know, having the gang traverse the Earth in a van, fighting evil and avoiding the authorities is STUPID. We don’t care if they’re happy or not – there’s a reason we watch TEEN ANGST shows, folks. Hash out the angst.

And that’s as coherent as I can be on that subject.

The Pacing: Somewhere along the way, it was decided that if everyone weighed their words and spoke their lines very. Very. Deliberately. And. Slowly. It would add importance and drama. In case you were wondering, it didn’t. At all. And yeah…sorry, Liz and Max making out does nothing for the audience anymore. In fact, it pretty much creeped us out. (Amy has the bruises from Michelle’s horror to show for it.) That chemistry was destroyed well over two years ago. Could we do something else with our time besides groping and poorly written dialogue? No? Fine. Whatever. Way to go out in a blaze of mediocrity there.

The Characterization: Do you remember when Liz and Maria had backbones? And when Isabel was feisty and protective? Neither do we. Michael once had an actual motive behind his reactionary anger, and Max was trying to hold them all together. Valenti had, well, a life. And Kyle, well – okay, Kyle’s the only person on this show that got better as it went on, but that’s not for a lack of trying on the writers’ part. I’d be impressed if he clocked more than an hour of screen time this whole season. The characters that left in that van were completely different than the ones that started the show. It was almost like watching a really bad AU fic come to life. Why not just make Max a water delivery boy and be done with it?

The Parents: Maria’s “my mother doesn’t even recognize me anymore” comment made me laugh. While I understand that Dianne Farr had a role on another (much better) series – why did it take them a whole season to toss an offhanded reference to Amy? Maria goes off to New York with nary a word from mom? I’m curious why Mr. Parker suddenly has more screen time than Valenti and Kyle put together – and what hole Mrs. Parker got sucked into. And then there’s the Evans’. In the more disturbing, and not in a creepy-good-kind of disturbing way, Mr. Evans enlists his wife in spying on their children after Max got arrested. Personally, I never did quite understand why Max wasn’t talking to his parents and wondered about how he managed to survive with no job. But I digress – what was the point of that storyline? They started off the season with it, then dropped it, only to pick it up in the last few episodes. Then when Isabel and Max find out what their parents have been up to – they’re fine. Well, if I was being spied upon by my family, I sure as hell wouldn’t be taking it so kindly – alien or not.

The Past Lives : Isabel’s honeymoon episode was decent. Really. It tied in the connection to Antar and showed that Vilandra wasn’t quite as far from Isabel as she’d like to believe. There was that creepy-good thing going on as she attacked her brother and Michael so that she could go off with her former lover, Kivar. And of course, as Kivar disappeared, so did that whole storyline. Because, ta da! It was all solved!

The Stupidity Though this has already been covered extensively, it was stupid. They all live in a van? Where, down by the river? Why the hell don’t they just change their faces? Or move to a galaxy far, far away? I could even handle it if they were in the van running. But they’re fighting crime? Doing good? Ahahahahaha. Did anyone on staff even watch this series?

Yeah. I didn’t think so either.