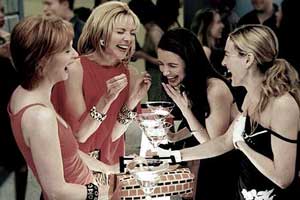 I’ve been led to believe that my “Sassy Woman of the 21st Century” card was revoked the day I decided not to watch the pilot – or any subsequent episode – of Sex and the City. In my defense, I didn’t have HBO at the time, but apparently my excuse is no longer valid. Almost all the seasons are available on DVD, and I’ve since upgraded my cable package.

Almost every woman I know watches the show. My clients natter on incessantly about Carrie’s shoes. My best friend from college, the one who was around for my own personal sexual revolution, swears that the Sex girls are exactly like us. I can even count five men in my life who tape the show weekly. Yet. I’ve been resisting.

Until recently, when I was overcome with the urge to sit around in my pajamas with a girlfriend and some Vanilla Coke. For reasons unknown, this seemed like the perfect time to pop my proverbial SATC cherry. Several hours later I had developed a fierce hatred of Charlotte, and finally felt justified in my decision not to partake in this particular pop culture offering.

Because, honestly? I utterly failed to see the appeal.

They are selfish, fickle, materialistic, and truly seem to think a man will make everything better. These characters talk about sex as if they invented it. Or, rather, as if Samantha invented it. Where she goes, so go the other three – sex without commitment, sex with younger men, sex in strange places. And then they have to go to dinner and talk about it in a self-congratulatory way. “Just do it already!” I kept thinking, “And shut up about it.”

After watching a sizeable chunk of season one, a small smattering of season two, and several nonsequential re-runs on HBO, I’m sort of offended that so many people thought this was something I would like. It’s like people assuming I like the Backstreet Boys because I’m an *NSYNC fan. Just because I like sex means I want to watch the SATC girls talk about it to death?

The show does have some truly laugh-out-loud moments. The penis graffiti on Carrie’s brand new bus poster comes to mind, or Carrie’s spectacular case of Shack Sun (the sun will always shine more brightly on the day you wake up after a poorly thought out hook-up) when she finds herself in a college kid’s messy loft. I’m even kind of fond of Miranda, quietly snarky in her business suits. She, out of the four, is written without apology, as if creator Darren Star and Co. knew she was the only one who isn’t a caricature of stereotypical late-90s idealism.

My attempt to get myself hooked on Sex and the City merely left me craving something different. Any television producers out there looking for the next big thing? Listen up, here’s my pitch: Four girls. One’s a struggling actress, one slaves at an entertainment conglomerate, one works for an ad agency and the final one works in tech support. They’re all pretty cute, but want things that seem just out of their reach. They buy designer shoes on sale and secretly know the choreography to multiple pop hits. They’re normal and they hate paying rent. They’ll never talk about blow jobs in public without dissolving into fits of giggles. But they are ratings gold. Trust me.