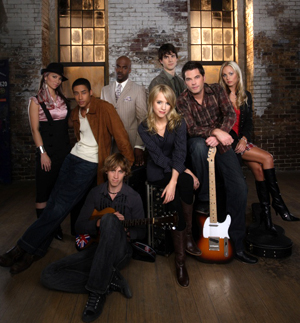 When I sat down to write the recap for Instant Star Season One, I was filled with the passion of a new fan, one who has gobbled up an entire season of television in just a couple of sittings, one who wants to tell the world about the gem she’s found. As I sit down to write this recap for Season Two, it’s with the knowledge that it’s going to be a long row to hoe for my favorite characters, and that knowledge fills me with a nervous energy and yes – a little dread.

The new season begins February 16 on The N with a one-hour premiere. Things aren’t looking so peachy for the gang, as you can see from these clips, and after two seasons, I’m kind of invested, you know? Every angsty plot turn is like a dagger to my little dramatic heart.

When we last left Jude, Tommy and company — Jude hit #1 but was being blackmailed for getting drunk and stupid, Tommy was making little girls cry, Sadie was flirting with Qwest and being perved on by Liam and Jamie was being a good guy, as usual. Season Two also introduced some new characters: Liam, the jerky business manager for G Major; Mason, the adorable gay winner of the second Instant Star competition; Patsy, the crazy punky new G Major artist; Don, Victoria’s divorce lawyer; and Portia, Tommy’s ex-wife. But that’s just the tip of the iceberg, right? Let’s break it down.

Tommy and Jude
One of my favorite songs from S2 was the heartbreaking “There’s Us,” which summed up the Tommy/Jude relationship in a single line, “Not everything is supposed to come true.” This relationship is the Mulder and Scully of Instant Star, the pairing that can just never exist under penalty of low ratings. It’s incredibly frustrating. In S2, the biggest thing keeping them apart is their relationships with other people, relationships they’re only in because they can’t have each other. Sadie hits the nail on the head in “No Sleep ‘Til Brooklyn” when she tells Jamie to never get in the way of Tommy and Jude, because they’ll always pick each other. Duh.

Of course, there were still lots of heart-pounding moments. Five minutes into the S2 two-part premiere, Tommy meets Jude’s tour bus as it arrives back home and the two of them can’t take their eyes off each other. In the very next episode, Tommy strokes her hair and leans so close they’re practically nose-to-nose, talking in intimate whispers. In the much-anticipated episode “Hallelujah,” Jude and Tommy find themselves locked in a room together, write the great song “Liar Liar,” and then end up snuggling on a couch (and almost kissing). Oh, and when Jude asks Tommy why his relationship with Sadie was never right, he says, “You know exactly why.” Eeee! Melt.

By the end of the season, it seemed that a hookup between these two was inevitable. Another incredibly hot kiss upon completion of Jude’s second album (not quite as hot as the S1 kiss in “Unsweet Sixteen,” but still), and an offer of an actual date from Tommy… what could go wrong? Well, Tommy could disappear, leaving a distraught Jude wondering if she would ever see him again, then show up later in a random mountain lodgey place where he meets a little girl who cries and calls for her mommy. You can bet the assumption initially was that the kid was Tommy’s. Meanwhile, pain drives Jude to follow Mason out on tour where she does shots with a blackmail-prone stranger and his camera.

Jude and Jamie
This relationship was so doomed from the start. The start being the moment Jude decided to give Jamie a shot back in S1, since Tommy had chosen Sadie. This relationship consisted entirely of Jude being on tour, coming home, Jamie being incredibly needy, and then breaking up. The whole thing was over in the blink of an eye, and after a rocky spot where the two didn’t talk to each other, Jamie is still the guy who runs after Jude when she’s hurting.

Tommy and Sadie
Also doomed from the start. I’ve said it before and I’ll say it again, the fact that Sadie still thinks of Tommy as the Boyz Attack heartthrob she hung posters of on her wall makes this pairing extra unsettling. She’s practically a stalker in S1, and by S2 she’s become Needy McNeedypants. That she’s also the one who’s known from the beginning that Tommy and Jude share the love-that-must-not-speak-it’s-name, and she dated him anyway… Yeah. Not smart. The two break up when Tommy won’t put Sadie before his career, or Jude.

Jude and Spiederman
The fact that Spiederman says they’re like Bart and Lisa Simpson when they break up is reason enough to skip this couple entirely. But I will soldier on — Spiederman (first name, Vincent) is the lead guitar player in Jude’s band. Their relationship appears to be based on a lot of tour bus pranks and being cooped up in a small space with each other for a long time. Jude wants Spied to be more romantic, and he likes her because she’s just one of the guys. They break up when Spied figures out what everyone else already knows – that Jude’s heart belongs to Tommy.

Jamie and Patsy
Patsy is a “punk rock princess” who shows up in “I Fought the Law,” an episode where Jude tries to shake off her good-girl image by throwing up graffiti over a shock-jock’s billboards. Patsy is an odd duck. She’s got all the Goth stuff down, ripped fishnets, short plaid skirts, huge ass-kicking boots, piercings, pale complexion, black nail polish and lipstick. She’s also got, of course, a heart of gold, and she can’t help but fall for nice-guy Jamie. She woos him by destroying his grandfather’s military jacket – something that makes me angry each time I watch it happen – and biting his bottom lip. Jamie, always a sucker for a woman who’ll boss him around, falls right back. In his new role of A&R stooge at G Major, Patsy is the first act that Jamie scouts for the label. Her performances are… loud.

Jude and Kat
There’s not a whole lot to report here. Kat is just a blip on the radar in S2. Kat never recovers from Jamie choosing Jude over her. In episode five (titled “Viciousness”) Kat decides that she can’t contain her jealousy over Jude’s success, and tries to get back at her by kissing Jude’s dad. Ew! As if that would work, anyway. Kat and Jude’s farewell consists of Kat saying that she can’t be friends with Jude anymore, and she’s never seen again.

Liam and Sadie
I have to mention this, only because it’s so darned creepy. In the final episodes of the season, Sadie gets a job as the receptionist at G Major. Liam takes advantage of Sadie’s charms (“charms” being her blond hottitude) and drags her to a business dinner, where he drapes his arm around her and tells her she’s beautiful. The next day, Liam is all business, though he takes every opportunity to leer at Sadie.

Qwest and Sadie
Aw! Qwest! I wish they’d give this guy a real storyline, because like Jamie, Qwest is a total sweetie, and unlike Jamie, he’s pretty freaking hot. When Sadie starts working at G Major, Qwest starts giving her special treatment. By the last episode, he’s giving her flowers but there’s no word yet on whether she’ll give in.

Portia and Sadie
Tommy’s ex-wife Portia becomes a recurring character in S2, and she has a strange fascination with Sadie. It’s unclear whether Portia wants what’s best for Sadie – encouraging her to audition for musicals, warning her that Tommy’s a serial cheater, giving her career advice and special attention – or if she wants for Tommy to suffer. The character is honestly played a little bit of both ways. On the one hand, Portia has both been there and done that with Tommy. On the other hand, she seems incapable of thinking Tommy might be different now, and her attentions to Sadie have an overtone of revenge.

The Parents
I appreciate that Instant Star acknowledges that Jude has parents, parents who urge her to act fiscally responsible and stay in school. But I’ll admit that each scene involving her mother, Victoria, makes me want to claw my eyes out. In S2, Victoria and Jude’s dad Stuart are finalizing their divorce. Victoria gets the house and the kids (it’s unclear whether they have time set aside to be with Stuart), and she wants to control Jude’s finances, too – even though Stuart is an accountant. Jude, wanting to rent her own rehearsal space, agrees to give her finances over to her mom if she’ll let Jude have the extra money. Hurt, Stuart avoids Jude for a while (hello! terrible parent!), but they make up when he buys her a Mustang and helps her fix it up.

Meanwhile, Victoria is hooking up with her sketchy divorce attorney, Don. They play tennis together, make out on the couch and he takes her to New York for her birthday. By the end of the season, she has put the house up for sale – horrifying Jude and Sadie – and has married Don and left the girls to their own devices (hello! terrible parent!).

Other Stuff You Should Probably Know

So. The best I’m hoping for this season is some Tommy/Jude making out before they come up with another excuse to keep them apart. Oh, sure, there’ll be great music, and smart writing, and all that stuff. And I’ll love the show even as it rips out my heart, stomps it into the floor, and rubs salt in the wounds.