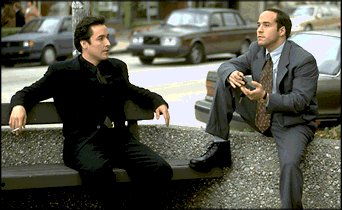 Let’s get the boring stuff out of the way first. Serendipity is about two people who meet while trying to purchase the same pair of gloves in Bloomingdale’s five days before Christmas. They share blended coffee beverages, pertinent information (favorite movies, etc.), stories about the constellations, and a wonderful evening of ice skating under the stars. At the end of the night, the woman refuses to give the man her full name or phone number, and refuses to accept his, believing that if they are meant to be together, fate will make it so. Thus, he writes his name and number on the back of a five-dollar bill, which she promptly spends. She writes her name and number on the inside of a book, and then sells it to a used bookstore. If they are meant to be together, see, destiny/fate/serendipity will place those items into the correct hands. Jump ahead seven years. Both of them are going to marry other people, who just aren’t quite the right fit. Hence the second half of the movie follows the two as they search high and low to find what fate obviously intended to occur in the first place—true love and happiness with each other.

Now let’s talk about what makes this really good: John Cusack. If there is one thing Cusack has based his career upon as an actor, it’s looking forlorn when he’s pining for a woman. It’s a beautiful thing to behold: his sad dark brown eyes and pouty lips, the slight wrinkle in his forehead. And if that’s not enough, he’s excellent at making his characters (this one conveniently named Jon) appear tragic while at the same time being quirky and adorable. Cusack is…well…he’s CUSACK. I think every woman on the planet has been under his spell at one time or another.

Serendipity goes one step further, though, and adds a little something to the mix with Cusack’s real life best friend Jeremy Piven. Piven is the odd little man who manages to be fabulously sexy while also being totally, hysterically funny. In a better world, Piven would still be appearing weekly on our television sets as the hapless title character of ABC’s long-since cancelled Cupid. Alas, ABC sucks ass, and so it’s a good thing John makes so many films, and drags his friend Jeremy along for the ride. Cusack and Piven together are an unbeatable combination, even if the rest of Serendipity is sort of lacking. The other cast members just didn’t stand a chance.

Kate Beckinsale is truly breathtaking as the love interest, Sara; from her soft, English voice to the feminine way she wrinkles her nose. But she’s merely charming, with a lowercase “C,” next to Cusack’s Fucking Charming, with a capital—you know. Molly Shannon fills in as Sara’s best friend, and she just doesn’t fit at all as the skeptical owner of a new age store. She doesn’t have a lick of chemistry with the rest of the cast, and she looks sort of old next to Beckinsale, who just glows. Rounding out the cast are Bridget Moynahan, as Jon’s fiancé, and John Corbett (who will be eternally known to me as “Chris in the Morning”), as Sara’s fiancé. Eugene Levy also appears as a fussy Bloomingdale’s clerk, but it’s a throw-away part, and not really worthy of his talents.

So I said before that Serendipity was lacking because the supporting cast can’t match the spunk of Piven and Cusack. That’s not really the whole picture, though. I was, of course, rooting for Sara and Jon to find each other. I also found myself getting frustrated with each near miss, each twist of fate that would keep them apart until the end of the movie. Each scene with the Wrong Mates was cringe-worthy, because of the obvious wrongness of it. So much wrongness, in fact, that when Moynahan just up and disappeared three-quarters of the way through the movie, I didn’t even care. There is no bittersweet conflict when Jon and Sara leave their significant others, and I feel this is sort of a miss. As a movie goer, I often feel cheated when forced to watch characters in which I have no emotional investment.

In the end, Cusack lays in the middle of an outdoor roller rink (the newest incarnation of the skating rink from the beginning of the movie) and stares at the sky as he is covered in wet snow. It’s half of what he does best—the quirkiness. Moments later, he cocks his head and half-smiles, and cries a single perfect tear. And that’s the other half—the forlornness. It’s enough, really, to bring any girl right to him. You can bet it works on Sara, and me, and my three friends, and countless others. But quirkiness and forlornness aren’t really enough to base a movie on, even with the added bonus of Piven.