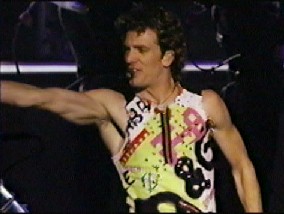 Melynee and I planned long ago the moments when we would cry during our first *NSYNC show. For her, it would be the moment of anticipation, when the music is building and the crowd is left waiting for The Boys to appear. For me, it would be the moment Lance was real, live and beautiful in front of me. Somehow we thought that, if we planned it, embraced it, it wouldn’t feel so hideously embarrassing when it happened.

I am proud to report, however, that there is a middle ground we never knew existed. It involves bruising your friends in tight clenches, and covering your mouth to hold in the screams. It’s getting to a place where there is a lump in your throat, but no actual tears in your eyes. And it requires a lot of whimpering.

Three *NSYNC shows in a row is very overwhelming. When two of those shows involve sitting within winking distance of Joey Fatone, it’s doubly overwhelming. And when, during one of those shows, you almost walk directly into Wade Robson without realizing who he is, you need about a week to recover from the pure adrenaline rush.

I am still recovering.

The Opening Acts
People are always disappointed when they realize that, outside of *NSYNC, I know nothing about pop music. So I had very little interest in any of the opening performers, with the exception of Meredith Edwards. Because, not only do I enjoy country music on occasion, but there is the whole Lance Connection. Of course there is. Unfortunately, to get to Meredith’s three songs, I had to sit through Tonya Mitchell. It was a painful, painful 20 minutes. My heart swelled with pride when Meredith took the stage immediately after and put that little tarted-up pop singer from Justin’s company TO SHAME. The fact that she performed her song from the On The Line soundtrack, accompanied by many, many clips of Lance being fabulous, did help her case somewhat. And. Um. I should admit at this point that I did scream “Laaaaaaance!” one time, loudly, at the very first show. And also got the lumpy-throat thing. From a movie trailer. Yes. Well. Moving on.

Dream was a pleasant surprise for me, and not just because Melody and I own the same sparkly blue Bug Girl pants. They’re all cute and giggly, several of them have little round hips and tummies, and their songs are catchy as hell. Someone should get Ashley a geography tutor, though, because each night she hollered about welcoming four “states” to the arena, and each night she welcomed “Philadelphia, Connecticut, New Jersey and New York.”

And then there is BBMak. The PopGurls have a very close friend named Lisa, who pointed out the hotness of BBMak to us months ago. I think we might have accused her of being on crack at the time. I would like to take this moment to publicly apologize to her about this. Because, okay. BBMak is pretty hot. I don’t know any of their names, but the lead singer guy wore a fantastic tight purple tie-dyed shirt two of the nights we went, and I couldn’t stop staring at him. Also, the not-blond guitar player who has Scott Foley’s hair should be encouraged at all points to wear little jean jackets. Also, I might be very close to purchasing the debut CD, if only so that I can listen to “Unpredictable” many times in a row.

BBMak is immediately followed by the *NSYNC Concert Countdown, where they put 30 minutes on a clock up on the gigantic screens, and then never show it to you again until The Boys are two minutes from taking the stage. It would be more annoying, except that you also get to see the Anti-Drug commercial, which is hysterical and gives me squishy Chris thoughts, and the On The Line trailer (condensed from Meredith’s performance) which shows the world that Lance does, in fact, know how to kiss girls. Swoon.

The Main Event
The show is a jumble of very specific moments that form a very unclear picture. I know that it opened with “Pop” and closed with “Bye Bye Bye.” I know that the outfits were loud and sparkly. I know that Lance made me cry when he introduced the band, JC made me fall over when he bent his knee into the floor hump, Joey rendered me motionless with his growly stare, Justin made my mouth grow dry with his shamelessness, and Chris surprised me with his stealthy sexiness. Thank goodness I have pictures to remind me of them jumping and pointing and thrusting and stuff.

This is, to be sure, Dirty Pop, and should probably come with a parental warning. To begin with, there is the oft-mentioned, as-seen-on-MTV floor hump. It’s nastier in real life, somehow made more so by the breathless, determined looks they all make while doing it. There is the new song, “Up Against the Wall,” which makes no qualms at all about what it means, with lyrics like “We never said a word at all…She already had me up against the wall.” When you couple it with the choreography – female dancers bending over, palms to the floor, while the boys grind against them from behind – there’s nothing left for your imagination to fill in, really. There’s “Gone,” which really must be seen to be believed. There are pictures floating around of Justin’s infamous turn on the catwalk, but please, please believe me that it’s infinitely more powerful than you think it is. Which is a great segue into the dirtiest thing this tour has to offer, which is Justin Timberlake himself.

Sitting up off the floor the third night, we were treated to just how Out. Of. Control. this boy really is. He’s so comfortable in using his body to make girls scream that it would disturb me if I could get enough oxygen to my brain to think about it. Standing in the spotlight, popping his hips, he grins out at the crowd until the screams can’t possibly get louder. And when it starts to taper off, he’ll do it again, and the grin will get wider, and he’ll wipe his lips or run a hand over his shaved head, and it’s Pure Sex. Right there in front of you, and no matter where you are in the arena, you feel as if he’s doing it just to turn YOU on.

The New Music
I love all the new dance-poppy songs. “Up Against the Wall” is probably my very favorite of these. It already lives in a little corner of my brain, and taunts me with the fact that I can’t learn all the words from the poorly recorded MP3 I’ve been able to scour off the Internet. Secretly, I hope that “Two of Us” is a JC song, because it’s sweet and catchy, with adorably literal choreography. Conversely, I hope that “Game Over” is NOT a JC song, because while I enjoy the actual song, the skit/choreography that occurs onstage is painful to watch, and after “Digital Get Down,” I had hoped JC had moved away from the virtual reality theme.

“Selfish” and “Fallen,” two of the new ballads, are standard ballad schmoop with nice harmonies. I think there was another one in there, too, but Lance has this way of reclining every time that he’s sitting down that sort of distracts me, and I very clearly remember not being able to take my eyes off him during the New Ballad Preview section. Truly, though, the stage belongs to “Gone.” I’m worried that the recorded version won’t live up to the live version, where Justin pours everything into the song and nothing seems like over-emoting.

The Recovery
On the day after the third show I had to fly back home. After being on the other side of the country for eight days, you’d think I would be happy to get back to my own bed. Instead, I felt sort of sad and depressed that I didn’t have an *NSYNC show to attend that night. This is how people end up following them around the country, I’m sure. You get sucked in by the ritual of going to the show – putting on “Giddy Up” and donning a newly bedazzled t-shirt, driving to the show singing “It Makes Me Ill,” strutting to the front of the arena to your floor seats, standing tall and snuggling with your girl friend so that Joey will notice you, screaming for Lance (or JC, or Justin, or Chris) until you literally cannot speak the next day. It sort of makes being a 26-year-old teenie worth it.