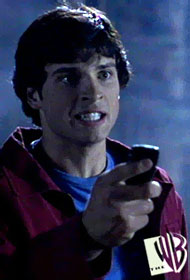 The first two episodes of Smallville’s second season are like night and day, two hours of television joined together by little more than a cast of characters and a title sequence.

“Vortex” serves as part two of last-season’s cliffhanger, “Tempest.” When the closing credits started to roll on the Smallville crew last May, Clark had plunged into a tornado to save Lana, Chloe was left alone on the dance floor, Remy Zero fanboy Pete was embarrassing himself, Ma Kent was face-to-face with a suddenly active spaceship, and Pa Kent raced out into the storm after a rogue journalist who had learned Clark’s secret. Lex “You Know You Want Me” Luthor had a face full of blood, a father trapped under a pillar and one hell of a decision to make.

As with every season finale cliffhanger since the beginning of time the events of the follow-up episode were pretty underwhelming and much what you’d expect – with a few twists. Clark saved Lana, but she was lucid enough to realize that neither of them would have survived under normal circumstances. Chloe pretended that it was okay for Clark to leave her stranded at the dance, then brushed off his attempts to make it up to her by playing her Let’s Just Be Friends card. Pete was still kind of schmucky! But his feelings for Chloe are getting harder for him to hide. Ma Kent watched in horror as Clark’s spaceship flew right out of the storm cellar, (exposing her to what kind of radiation? will she lose her hair or get superpowers, too?) and we the viewers watched as it crashed into another cornfield. Pa Kent behaved his usual macho self and beat up journalist Roger Nixon, both before and after they were trapped under a displaced mobile home. Nixon was bad, good, then very very bad again. And Lex – poor tortured-yet-sexy-as-hell Lex – managed to save his father, but then hastily approved a surgery that left him blind. His past affiliations with Nixon were exposed to Clark, and in his confusion over the state of their relationship Lex shot Nixon dead.

But that’s just the recap. What does it all mean? What a great question. And, really, you’d think week two would bring answers. Or continuations. Nah.

“Heat” is to Smallville as “Heatwave” was to Roswell. It’s the porn, baby. It’s a reason to show guest star Krista Allen mostly nude and Lex’s tongue at its kissing best. It’s a reason to make Clark hot for teacher, and hotter for Lana, all in the name of giving him a new superpower (he can shoot laser beams from his eyes). It’s a reason for Clark to get jealous of yet another woman in Lex’s life, and a better reason for him to protect Lex when Clark finds out she is using mind control to make him marry her and sign over his fortune.

The real disconnect between these two episodes is in the timing. “Tempest” and “Vortex” occurred at the end of last school year, during the Spring Formal. “Heat” opens up on the new school year. I’m bad at math, but I’d guess this puts the episodes around three months apart in Smallville time. This might be fine for other episodes down the line, but for the first two episodes of the season to be so disconnected…it feels like maybe the story arc isn’t the most important priority to the people running the show.

As stand-alone episodes, both of these do good things for the characters. I’m ready and waiting for a Pete/Chloe hook-up. It’s clear that he wants her just as much as she needs to be wanted. (Plus, I clearly have a thing about sidekicks gettin’ busy.) Lana is on the road to growing a spine and proving she actually has a brain in that pretty head of hers. Even if she’s not the one who learns Clark’s secret first, she’s the one who deserves it. Our little Clark is becoming a man. Along with his manly powers – He can maybe fly! He can burn stuff with his eyes! He’s really fast and really strong! He also wants to grope girls. Even more importantly, he’s learning that you have to fight to get what you want. Especially if what you want is your best friend.

And your best friend is Lex, he’s not perfect, and he sometimes lets you down. This is one of my favorite parts about the Clark/Lex dynamic. They each tend to elevate the other above all fault, regardless of the known existence of multiple lies between them, and then they are rocked to the core when the other falls off his pedestal. It’s genius, because it’s the way real friendships work. We expect the best and overlook the worst because we’ve chosen these people to be in our lives.

Besides the saucy kissing (can I mention again that there was tongue?) “Heat” really did little for Lex’s character. Anything he said or did can always be easily attributable to being under Desiree’s spell. “Vortex,” though. That’s where the meat is.

Lex chose to save the one person who really has the power to take away his dignity and his financial stability. The one person who has time and again dented his self-worth, who has turned him into the kind of guy who never had a real friend until he met Clark. He saved him and looked after him and worried about him and even showed him love, all so Lionel could say, “You should have let me die.” If there is one thing the Smallville writers ever get right, this relationship is it. I mean, really. Ouch. Clark finding out about Nixon and questioning their friendship was just salt in the wound. While there was no clear motive for Lex to kill Nixon, I postulate that he wasn’t doing it just to a) save him from whacking Pa Kent or b) to shut him up. He did it because he didn’t know what else to do for Clark to believe in him again. So he showed him that he would kill to protect his family.

This season of Smallville might turn out to be one gigantic mish-mash of plot twists and monsters of the week, or the writers might surprise me and iron out some of the kinks in the mytharc they can’t seem to decide they want to build. But as long as the characters manage to develop they way they have, Lex in particular, I’m willing to stick with it.