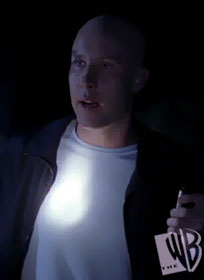 A recent conversation between myself and my husband:

Me: I daresay the Smallville season finale was better than the Angel finale, the X-Files series finale and Episode II.

I’m actually not sad at all that the Smallville season one ender, “Tempest” (changed abruptly from “The Storm” when, I imagine, the WB promotional staff realized there had been a Dawson’s Creek event episode of the same name a couple of years ago) was full of character development, moving plotlines and. You know. Lex. In fact, it’s probably safe to say that I was pleasantly surprised to find myself feeling real emotion—anger, sadness, and incredulity—while watching the episode.

With the exception of poor Pete, every single character encountered something that will no doubt change his/her forward trajectory in the next season. Because I’m a girl of lists, I was only able to gather my thoughts by breaking the events of the episode down into action, immediate effect and a predicted effect on next season.

Action: Lex’s dad Lionel blows into town, insults Lex in front of the entire fertilizer plant and then announces that everyone is out of a job.
Effect: Oh, Lex. Lionel’s closure of the plant started an out-and-out war between father and son. Michael Rosenbaum deserves a fucking Emmy for the way he played this scene, at first proud of his accomplishments, at last stunned and destroyed by the betrayal of his father. It’s really no wonder Lex grows up to be so full of hatred.
Prediction: This will be the turning point for Lex. He’ll do everything possible to defeat his father, and if he has to throw his friends (Clark) under the bus to do that, he will. Lionel’s mental abuse is convincing Lex little by little that the good guys never win, that playing by the rules never gets you anywhere, that we live in a “want, take, have” society.

Action: Inquisitor reporter Roger Nixon continues to follow Clark, going so far as to blow up the family truck with Clark inside so that he can tape the entire thing and sell the information to the Luthors. He tells Lex that he has the goods on the Kents, and threatens to sell it to Lionel if Lex doesn’t bite.
Effect: The unscrupulous Nixon has concrete proof that Clark isn’t human and steals something from Lex that will further his case. Later in the episode he eavesdrops on a conversation between Clark and his parents and learns that Clark is alien, and finally found the space ship in the root cellar. Lex is torn between protecting Clark, knowing the truth, and knowing something his father doesn’t.
Prediction: I think Nixon is going to bite the dust. He can’t be allowed to spill the beans to everyone unless the Smallville writers plan to rewrite Superman canon. Lex won’t learn of Clark’s true identity, but he’s not going to let his investigation go as he once promised.

Action: Whitney joins the Marines.
Effect: Okay. Whitney and Lana’s relationship isn’t one of my favorite plotlines, so I was surprised at the sadness I felt for Whitney during “Tempest.” He is obviously crazy in love with Lana and doesn’t understand why she doesn’t feel the same way. Although I think the Marines plot is ridiculous, I’m glad that it gave Eric Johnson the opportunity to stretch his acting legs. It was cheesy, sure, but he almost made me want to ask Whitney to stay.
Prediction: I have no idea. Will he get hurt in the tornado and not be able to attend boot camp?

Action: Clark takes Chloe to the Spring Formal even though Lana does not have a date.
Effect: Chloe simply glows at being chosen over Clark’s obvious crush. Allison Mack nails Insecure High School Girl in the scene where she points out that Whitney won’t be around to take Lana and begs Clark not to stand her up. When Clark kisses her on the cheek in response, the giddiness of the moment caused the mister to practically squeal and say, “How cute!” (The mister would like to point out that he is not, as might be indicated, a gay male. And, also, he was squealing remarking about the shared look after the kiss, not the kiss itself.)
Prediction: Clark is going to hurt Chloe many times over, and she’s going to struggle to stay beside him. She will, though, because she’ll always believe that Clark is going to open his eyes one day.

Action: Lex convinces the plant managers to help him buy out his father and keep the plant open.
Effect: He’s doing it to best his father, but underneath all the revenge is a true desire to make things right. Lionel, however, does everything he can to stop it from happening, going so far as to buy the Smallville Savings and Loan so that he has control of the mortgages of the townsfolk working with Lex. Again, Rosenbaum is incredible in the scene where Lex learns what his father has done. The hatred builds and builds behind his eyes.
Prediction: Will Lex continue with the buyout, knowing that his new partners risk losing their homes in the process? Either he will, or Lionel will relent and keep the plant open himself. I’m betting that Lex finds the money, the deal goes sour, and he’s even more of a town pariah than he already is.

Action: Lex passive-aggressively asks Clark if their relationship is built on lies (while tying Clark’s bowtie and gazing at him lustfully).
Effect: Clark really doesn’t want to lie to Lex. It’s so clear that he sees a kinship between them. His parents might know the secret of his origin, but they don’t know what it’s like to be different from everyone else. Lex does, and Clark wants to tell Lex all about it and let them comfort each other. Lex, for his part, is so sick of everyone in his life lying to him that it’s tearing him apart that his first real friend is keeping him in the dark.
Prediction: Here lies the wedge that will drive the two apart. Clark’s guilt, Lex’s feeling of betrayal. In order for it to work, something has to give, and it never will.

Action: Clark realizes Lana is trapped in the storm and deserts Chloe at the dance.
Effect: Clark promised he wouldn’t pick Lana over Chloe, and he tried very hard not to. He’s a boy with a crush and an enormous chip on his shoulder, though. He’s convinced he had something to do with the death of Lana’s parents, he’s broken from years of yearning from afar, and he’ll always go to her when she needs him.
Prediction: Lana is already feeling the pull of the Clarkster. She’s ready for a change in their relationship, and with Whitney out of the picture…Sure. She’ll feel some guilt that Whitney is off defending his country (if he makes it, that is) while she’s making time with Tall, Dark and Handsome. But Clark has saved her life before and will, of course, do it again when he gets her out of the eye of the storm in next year’s season premiere. Clark will keep trying to push Lana away, and Chloe will cry a lot of tears.

Action: Ma and Pa Kent find Nixon in the root cellar, Pa chases him out into the storm, and Ma comes face to face with a suddenly animated space ship.
Effect: Jonathan displays his ever-present hatred of Lex, jumping to the conclusion that Lex is behind Nixon’s investigation into Clark. (An earlier scene, wherein Lex threatens Nixon with death if he comes anywhere near the Kents is proof that he wasn’t, or isn’t anymore.) Unable to control his rage, he sets out to kill Nixon with his bare hands, despite the pleas of his wife. The chunk of metal Nixon stole from Lex appears to actually be the key to Clark’s ship, and is magnetically drawn to the “ignition,” bringing the ship to life. Martha is the only one to see it in all its glory, and it is vaguely threatening.
Prediction: I already said Nixon will die, and I’m betting it happens in the storm. The video footage he shot of the ship will be destroyed, but we’ll spend a good deal of next season wondering where he’s stashed all the other evidence. Jonathan will never learn the truth about Lex’s involvement and will hate him even more. I hope that nothing happens with Martha and the ship, really. It smacks of a bad Roswell plot and I desperately want them to stay away from that.

Action: Lionel finally snaps and threatens to destroy Lex and anyone who helps him.
Effect: Here’s where I almost lost it. It’s hard to imagine any father ever treating his child this way, and John Glover is brutal. Rosenbaum kills the torment and anguish here. The storm that tore through the room, trapping Lionel and knocking a nasty gash into Lex’s forehead, was nothing compared to the tempest sparking between them just before the tornado hit. Lex has a big decision to make. Will he let his father die?
Prediction: I really, really want Lionel to die. I want for Lex to be free of his father’s tyranny and let Clark teach him how to be an upstanding member of society. But that’s not what will happen. Lionel will live to pick apart Lex little by little until he’s a bloody, torn shell of himself, lashing out at anyone who gets near him out of self-preservation.

I wish I would have given into the urge to tape this episode. While there were undoubtedly moments of bad acting, weak writing, and not-so special effects, “Tempest” was ultimately a fine hour of television. It will put a lot of pressure on the writers and directors to bring some sort of resolution, and to the actors to jump right back into their roles in season two with just as much commitment.