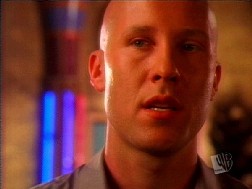 The thing about watching Smallville is, in the Great Big Scheme of Things, we know how the story ends. Therefore, the fun is all in the getting there. Why does Clark one day decide to create Superman? Why does Lex end up an evil criminal mastermind?

As usual, I’m really just interested in the Lex portion of the equation. He’s trying so hard, at the age of 21, to forge his own destiny on the straight and narrow. What’s going to push him over the edge?

There are many theories about this in the fandom, but the one I’m leaning toward most is this: All the good, upstanding friends Lex makes are going to end up proving that even nice people are liars and cheats. And, really, if it comes down to splitting hairs, who isn’t going to choose the path that makes the most money? If, you know, liars are liars and cheaters are cheaters no matter the size of the deception.

Lately, Lex has been imposed upon by his father (Lionel), his business partner (Lana) and his best friend (Clark). There is always the argument that Lex likes to use his resources – money, influence, experience – to help out his friends. It’s his way of fitting in. And I agree with that line of reasoning. Except Lex has turned into that hot rich guy who hangs around dispensing sage advice. He gets smiles and kind words in return, but not always respect or honesty, which are the things he’s really seeking.

Lionel, of course, is a different animal. His move into Lex’s castle is less about his current blindness and overwhelmingly about his need to control things. He’s preying on Lex’s guilt for authorizing the operation that took his sight, and also on the niggling part of Lex that wonders if in the end all you really have is family. In the moment Lionel next betrays his son – and we all know it’s coming – Lex will learn that trusting in even the people who are tied to you by blood is a faulty move. He’ll take up Fox Mulder’s mantra, Trust No One. (Although, certainly, whether or not Lex trusts anyone now is open for debate.)

The teenagers of Smallville use Lex as the solution to all their problems. Lana wants to save the Talon, and Lex is the rich businessman with a lot of money in need of an image makeover. Stray kids get sick, and Lex will fly in medical specialists. Need a car? Lex will loan you one. Need to find out whom your mom slept with in the early 80s? Lex will hire an investigator. He’s always around, he’s got more money than God, and he can quote Greek mythology and English poets for any and all occasions. He slices, he dices, he can even cut through this aluminum can!

Lex’s ties to Lana are mostly tangled up in Clark, so I’m not sure what else he’s looking for out of his relationship with her. Everybody likes her, which means people might be willing to give Lex a break by association. His support of her schemes (fundraisers, spirit rallies, etc.) gives him some much-needed credibility in the community. What he doesn’t seem to want from her is the easy stuff. Sex. Hero worship. I think a lot of shows would go there, especially with an actor like Michael Rosenbaum, who has sexual chemistry that extends to inanimate objects. She doesn’t further his need for knowledge about the meteor rocks, though, and she doesn’t outwardly champion him to the naysayers. Lana asks a lot of him without really getting to know him or giving anything back.

Clark’s part in the decline of Lex is much, much clearer. Lex has always been willing to give Clark anything he wants, and anything Lex thinks he needs. Clark, in return, has given Lex his friendship. Not a small thing when you’ve got big secrets to hide, and your new best friend is the scion of Lionel Luthor. The secrets are the sticking point. Lex isn’t going to give and give forever, he wants Clark to share things with him he isn’t sharing with anyone else (insert sex joke here). And that’s not going to happen. Lex is a bundle of suspicion and need, hoping that he’ll get what he wants without ruining what he already has. He wants Clark in his life, but it doesn’t outweigh the fact that he can’t trust him.

From day one, we’ve expected Clark to set an example for Lex. Here is how you love people and care for them. What will ultimately contribute to the evility of Lex is that Clark is also showing him that you lie to protect the people you love, that you lie to protect yourself, and that there is always justification for standing on mushy moral ground.