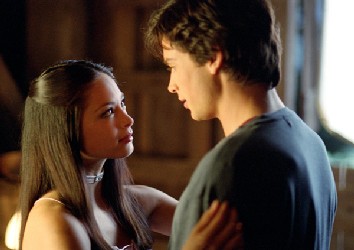 Before Clark Kent came down with a meteor shower on Smallville, Max Evans and company crashed into the New Mexico desert on Roswell. Both shows garnered high enough ratings in the first year to be labeled a Break Out Hit for the WB, and the similarities don’t end there.

It’s clear enough that both shows share the same theme – teenage alien(s) tries desperately to fit in with teenage humans while battling evil – but Smallville has also chosen to recycle Roswell’s tragic love story. Regardless of the source material inherent in the Superman myth, the creators of Smallville have followed the standard WB teen angst route in creating the will-they-won’t-they relationship of Clark and Lana. If it seems familiar to you, it is. They’re a near-carbon copy of Roswell’s Max and Liz. For instance…

Max/Liz: She knew what he was.
Clark/Lana: She’s starting to guess at what he is.

Max/Liz: They attended the Junior/Senior prom together, and ended up apart.
Clark/Lana: He went to the Spring Formal with someone else, and ended up with her.

Liz: Her family owned the café in which she worked.
Lana: Her aunt owned the theater, which became the trendy café where she works.

okay, this last one is a stretch. but still!

Can Clark and Lana be any more similar to Max and Liz? Only time will tell. The good news is that, three episodes into Smallville’s second season, the writers are managing to adhere to a mytharc and haven’t really contradicted anything they said last season. If we were keeping a tally, that would easily catapult Smallville ahead of it’s teen-targeted predecessor.