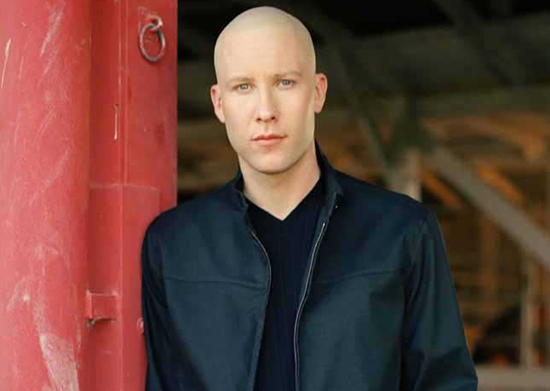 This morning at an airport newsstand I picked up a copy of Movieline with Sarah Michelle Gellar on the cover. It was more habit than anything because I care even less about SMG than her now-crappy show. While flipping through the pages, though, something familiar caught my eyes. Without hesitation, I plunked down $3.99.

I’m a creature of habit, especially in my TV viewing, so it’s not a surprise that I’m just getting addicted to Smallville. It’s hard for me to carve a niche in my schedule for new TV, and even though I had best intentions to watch the show from the beginning, the best I achieved were two sleepy viewings of episodes one and two in a crowded Las Vegas hotel room. Lucky for me, I’ve recently sunk back into my couch-potato ways (last seen during Buffy season three). One recent wide-awake viewing of Smallville and I was hooked.

Knowing nothing about Superman comics, or Superman lore, I don’t have any of the problems with the Man-Of-Steel-As-High-School-Student show that a lot of critics do. You’ll never hear me complain that it’s wrong the alien Clark doesn’t actually fly, and oddly enough, you’ll never hear me lament the lack of tights and spandex. My interests in the show are thus: cute boys, occasional witty dialogue, truckloads of teen angst and the Romance That Wants to Speak Its Name But Doesn’t.

Smallville is not the first show I’ve watch primarily for the sexual tension (X-Files, Roswell, etc.), but it might be the only one I’ve watched where there is no chance it will ever be resolved. Because, of course, the tension I’m talking about exists between Clark Kent and Lex Luthor.

Yeah, I know. I’m probably the last person alive to jump on this clue train. And it’s not as if I didn’t know, what with dozens of my friends already hooked on the show. Even Rosenbaum himself has admitted that the UST (unresolved sexual tension, for those of you joining us who weren’t as involved in the X-Files fandom as, say, me) is at least partially on purpose. And, if that isn’t enough to convince you that I’m not making it up, even my non-slash loving husband has taken to commenting on the predominance of the tension, nicknaming the local coffee shop “Clark and Lex’s Café of Love,” and remarking that the only way to defeat a recent monster of the week was with “the heat of [their] gay love.”

Even in the short amount of time I’ve watched the show (five weeks or so), I’ve become a Lex girl. While Rosenbaum is not a traditionally handsome guy, he is striking in a way few people can pull off, and the bald head is just part of that. He plays Lex with an ambiguous evility, a cold sexuality that is almost single-handedly the reason all that UST exists.

Tom Welling’s Clark Kent is just too freaking beautiful to be alive. He’s a walking, bad-acting testament to the powers of perfect bone structure and a buff, hairless chest. What he does do is play innocent farmboy exceptionally well. Flannel shirts and blue jeans can’t cover up the hot body underneath, but the floppy haircut (more Calvin Klein model than Kansas teenager) frames his moist blue eyes just so…that if I were Lex Luthor, I’d stare at him lustfully, too.

For me, the other highlight of the show is the nostalgic return to the small screen of John Schneider as Clark’s dad. When I was young, I had a little black kitten that I named Daisy, as in Daisy Duke, namesake of very tiny frayed denim shorts and female star of The Dukes of Hazzard. Not only is it pleasing to me that Schneider hasn’t appeared to age a bit since his days of terrorizing Hazzard county, but it’s also a joy to realize that he actually can act. Despite the fact that he has to deliver “We love you in all your freakishness” speeches to Clark on a weekly basis, his conflict with the Luthor family, and the resulting discomfort with Clark and Lex’s relationship friendship, is an excellent bit of angst in the show.

The rest of the cast falls quickly away from the talent of Rosenbaum, and even below that of Welling and Schneider. Clark’s two best friends Chloe and Pete, played by Allison Mack and Samuel L. Jones, are perhaps victims of poor casting. There’s no way Welling is believable as a 16-year-old, but Mack appears even older, while Jones appears roughly 15. Whenever the three of them are in a scene together, the age issue is so distracting that I’ve been completely unable to learn anything about the supporting characters at all. Annette O’Toole, on board as Clark’s mother, is perhaps a victim of bad dialogue. Her sincerity, delivered with Snow White breathiness, is cloying and not a bit important to moving along any of the series’ major storylines.

Clark, of course, has to have an actual romantic interest. Lana Lang (Kristen Kreuk) is the ethereally beautiful girl-next-door who Clark can never have. Not only is she popular and dating Whitney, a big blond football player (played by Eric Johnson who, I swear, must be pushing 35), she lost her parents in the meteor shower that brought Clark to Earth. He is so wracked with guilt that he won’t try to win her heart away from Whitney even when the quarterback ties Clark up and leaves him mostly-naked and fighting the effects of kryptonite in a cornfield (would-be boyfriend Lex saves him, natch). It’s not Kreuk’s fault that the Clark/Lana relationship doesn’t work. It’s just that there’s little tension between them, and what little there is cannot possibly compete with the heat generated between Clark and Lex.

There is nothing about the sci-fi leanings of the show that hasn’t been done countless times in other hour-long sci-fi television dramas. The most recent episode, which featured killer bees, so closely resembled several scenes from the X-Files movie Fight the Future that I jokingly predicted that Clark would run around the cornfield in four-inch heels (imagine my disappointment when it didn’t happen). There is nothing, even, that hasn’t been done better. Buffy did (yes, “did”) a far better job of portraying the trauma of high school. X-Files did (yes, yes and hell yes “did”) a better job creating genuinely scary mutants.

At best, Smallville is a guilty pleasure, sucking in viewers with the implication of romance between pretty lead actors. Undoubtedly, a year or so from now, Internet fans will be sending fake green-gemmed necklaces to unwitting television execs who have cancelled the show. I won’t participate in that campaign, just as I never tried to force Chris Carter to acknowledge Mulder and Scully’s love or never sent strawberry applesauce in breakable glass jars to the producers of Roswell. I’ll be sad, though. Especially when, in the series finale, Lex smolders into Clark’s bedroom, stares at his lips, and confesses.

That he loves him. Like a brother, of course.