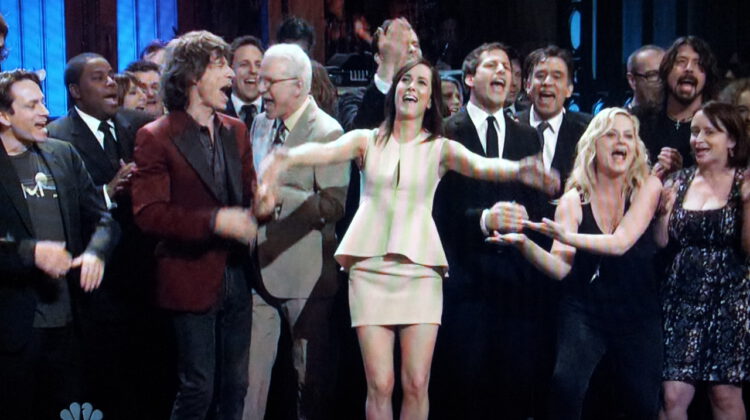 The rumors of Saturday Night Live facing the departure of their biggest stars have been flying for a few months now, so fans of the show tuned in with already-heavy hearts, bracing themselves for the last of powerhouse Kristen Wiig, Digital Shorts mastermind Andy Samberg, and always dependable Jason Sudeikis. While it’s not entirely clear that the latter will definitely be out the door, it was certainly an emotional tribute to two very beloved members of the SNL family.

Was it a perfect episode? Of course not. When is an episode of a sketch comedy show EVER perfect? That’s the nature of sketch. You try to hit different senses of humor, different audiences. If a whole entire sketch show was hilarious to me, that means they’ve got a very narrow audience. And I’m okay when episodes don’t hit it out of the ballpark because they so rarely do. Writing sketch isn’t like writing a sitcom; there isn’t an arc or structure, or a long story to tell. You get little comedy nuggets, and sometimes they’re hilarious, and sometimes they aren’t. Try picking up an episode from the 70s and finding something perfect about every sketch. You can’t. It’s not how sketch works.

And honestly, I liked most of the episode! Mick Jagger pleasantly surprised me as host. I felt like he really respects the show and was very eager to do a good job, and I laughed a lot at his performances. I found him pretty delightful — except that weird blues song because you are an old British rock star, dude.

But what SNL always delivers, in my world anyway, is this really great sense of love for its cast and also its audience. There’s no way that was Jason’s official last night, because they would have honored that.

I feel like Andy Samberg only got his digital short because I doubt he needed any more than that. His mark on SNL history will always be the digital short; it brought a new kind of sketch comedy to the masses and it made SNL relevant in the 21st century. He basically made YouTube what it is today, and brought sketch comedy to a viral level. There wouldn’t be so much comedy available to us on the Internet without him – “Lazy Sunday” broke the mold. It’s extremely fitting that he’d exit with a bookend to that with “Lazy Sunday 2.” It was a game-changer and will always be remembered that way.

And Kristen Wiig? Well. She’s going down as one of the greats, for sure. She has been the face of that show since the last greats left. She’s gonna be up there with Radner and Fey and Poehler and Shannon. She already is. She’s basically been considered an SNL legend for quite a while now, while she was still on the show. What I love about Wiig is that she’s not a typical sketch performer – she’s such a quiet, down-to-earth private person who can go on stage and lose her mind and do amazing things.

While Samberg showcased what he’s best known for as a quiet send-off, Kristen Wiig got the chance to showcase some of her well-known characters and she got her moment to cry in a lovely send-off. What started as a graduation sketch with Mick calling on one graduate named “Tristan” who has spent seven years in school (“She was held back”) turned into a heartwarming dance to “She’s a Rainbow” between Wiig and all her costars, only getting more emotional as she clung to Bill Hader and Jason Sudeikis in tears. Even Lorne Michaels joined the fold, twirling Wiig around for a very emotional few seconds. As Arcade Fire and the whole cast started singing “Ruby Tuesday,” we got random appearances by Kristen’s former costars Amy Poehler, Rachel Dratch, Chris Parnell and Will Forte — and, inexplicably, Chris Kattan (he’s never shared the stage with Wiig, but appears to sit around all day waiting for Lorne to call upon him when needed). It’s clear that Wiig meant a lot to her fellow cast and to the show’s history, and as she held back tears and pointed around on the lyric “I’m really gonna miss you,” it’s obvious that she’s ending a really important chapter of her life.

It’s truly a kick to the gut, though, because this is the end of such a wonderful era. Wiig and Samberg have both been around since 2005. It’s hard to lose those parts of your childhood SNL that you’ve been able to still hold on to. It’s weird to think about never being excited over Wiig resurrecting an old favorite, or to never sit and scream at a digital short again. It’s really tough for me to deal with change, especially when SNL is involved.

But honestly? I’m excited for the future of the show. I’m excited for some younger faces to start gaining more ground. I’m really, really looking forward to the other ladies coming forward and owning their place. It’s a really exciting time because the two most recognizable faces of the show are gone, and it’s time for new people to take the spotlight.

So it’s bittersweet. It hurts, but there are things to look forward to.

And well, when Lorne comes out to dance with you for a goodbye, consider my life over.