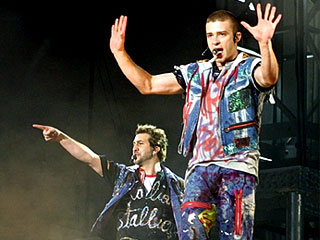 First, I have to thank Shana for being wonderfully evil. After deciding that we needed to go on Sunday, she managed to snag us two lovely seats. Then when I brought up that Melynee and Amanda didn’t have tickets for that night, she found four seats together. In the fifth row. Which were so close. So. Close. Mmm…

Let me just say here that starting off your *NSYNC experience in the fifth!row is a little overwhelming in good ways and bad. First – it reinforces any issue that might have been lingering at some level. Second – there is a possibility of losing all feeling in your legs and the ability to breathe. Third – unless you are even closer to the catwalk, there is nothing that can compare. Nothing.

Tuesday night, we had seats on the side – eighth row up. Really, not bad at all. And I have to say it was nice because one got a bird’s eye view of the show without having to rely on the screens for everything. But the entire time, there was this nagging feeling that we should be closer – that we needed to be within sweating distance – and it almost ached.

Because once you have the taste for so!close!boys! – you will never forget it.

Since I’ve already done my first reactions and I think Melynee and Amanda have a better perspective after hitting all three shows, this will be on the shorter side. And it will probably be pathetically out of order since I didn’t take any sort of notes.

Opening: “Pop”
What is this strange obsession the boys have with monks? I mean, they made no sense in the Madison Square Garden special and even less now. Do they want to come off all celibate-like? Are they trying to reinforce their religious beliefs on their fans? Is it just about the casual fashion that the robes imply? Am I psychoanalyzing this a little too much? Shall ponder.

Anyway, a nice burst of energy right from the start. We were teased on TRL and this more than makes up for it, even if I had to remind myself to stop giggling at the outfits. But – floor humping, in a very very good way. Yes, there are tingles.

“God Must Have Spent a Little More Time on You”
The beginning of the so!close!boys! issues. We were on the right side of the stage, where the boys go up on these little pedestal thingies. Lance was leaning on the railing and you could see how well-defined his arms were and the little bit of scruff on his chin. Oh my, was he hot. I’ve never really been a big fan of ballads, but if I could have the boys sitting all next to me on a bed and singing sappy love songs, I think I just may be able to reverse my decision on that. Hmm… how to get that to happen…

“Hi Jackson!”
Ok, I found the skits to be pretty hilarious. The cowboy one was just so damn funny that co-worker S. and I would trade off giggling “Hi Jackson”s for a while. It reminded me of the moment the boys were first endeared to me: on SNL and the “No Refund/Supersize It” skit. They have such a wonderful sense of humour about themselves that you can’t help but laugh along. (Which, I think, is why the Backstreet “We’re serious artists” Boys are finding themselves on the downward slope.) The comment about mastering a sound that was “highly repetitive” just reinforced my adoration.

The pre-“Celebrity” skit is definitely amusing as well… They just all seem to get along and enjoy each other’s company, and that is quite infectious.

“Celebrity”
This is their weakest pop song, I felt. The ballads (and I’m so not a ballad-gurl) were quite nice, and I understand the idea of ‘celebrity’ is something strong to lead with but, as a tune, eh. Does nothing for me.

“Gone”
Did I say I didn’t like ballads? Ok, I take that back for now. Even without Justin’s heel-digging and hip-thrusting, this is an amazing song. Non-fanatical friends at work who went to the shows came back raving about this song. It’s gorgeous and puts the over-played “This I Promise You” to shame. It’s just… wow.

“Give us some of that dirty pop!”
We were on Chris/Joey’s side. They were big. And shiny. And I would happily request dirty anything from them. I would yell out my dirty requests loudly and repeatedly. Unless they needed to be whispered ohsoveryclose. Uhm, yeah.

That’s not Will Smith!
“The Two of Us” is so addictive. It’s the chorus that catches you and bounces you in place. I can’t get it out of my head and have taken to singing it at random moments during the day. I can’t wait until I get the damn album so I can sing the right words instead of “You know I just can’t get you off my mind, Na na na na neh neh neh, Just the two of us, two of us, ye-ah.”

JC’s Bouncing
I think it’s pretty obvious which songs he wrote – he gets all sorts of cute and excited and bouncy. I was all proud of him and I didn’t know why – it was kind of like him and his Joey-love on Making the Video. I just wanted to hug him and pat his head.

Chris Strips! Joey Reads!
I have to say, it seems like they made a concerted effort to give everyone a shining moment. So, even though it was odd and kind of annoying – it was nice to see Joey reading fan letters. Lord knows you can hardly hear him sing, so I got all happy when I heard his voice. Chris was definitely amusing in his little stripping excursion: all rated-G, of course. (In case you are thinking about which boy you’d most like to see strip, I highly suggest not saying Joey would be your last choice. I’ve slapped people for that. In meetings. I have issues.)

“She had me up against the wall.”
Whimper… Grinding… Whimper… Dancing… Whimper… JC was right in front of us. He jumped. I have pictures. I heart him. I want to find these boys and… yes. I need a moment.

“Game Over”
I didn’t mind the intro. I really liked the opening music. But it never ended. Then some of the boys exploded out of the floor and that was damn cool. The dance number was adorable, though… I’m just so smitten with the Justin/Lance 80’s old-school foot-crossing move.

“Bye Bye Bye”
The encore. The finale. The boys came and they FPA’d their little hearts out for us. It was like the beginning of my fascination coming full-circle. I’ve seen the MSG BBB performance more times than I can count and I must say that it’s even better and intensely captivating in person.

And then they left and I was so sad…

It’s like pure-pop-prozac and I want more. People at work have mentioned that I seem happier than I have in quite some time. I’m giggly and bouncy and sing random lyrics in my head while spinning in my chair. Four songs into Tuesday night’s performance and I decided Michelle and I had to go to the Vegas show. But I’m still “the gurl least enamoured with the boys.” Uhm, yeah. Sure.