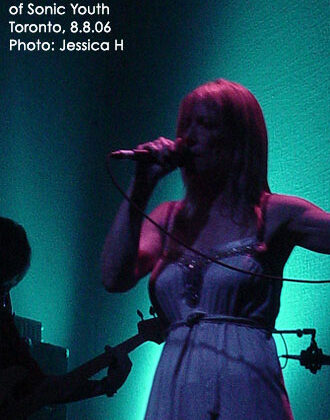 If I recall correctly, for the past couple of tours Sonic Youth has been threatening to call it quits. So every time the band puts out a record and tours my heart skips a beat — excited to see and hear them again, but always fearful that it will be for the last time. So a few months ago when Rather Ripped was released, my heart again, was sent into a series a palpitations. And once the tour was announced and these tickets were in my hands it was all over.

Waiting in line in front of the Kool Haus in Toronto proved to be an interesting experience. I was surrounded by fans in their mid-teens spouting off about their favorite songs, albums, and members of the band, it struck me that some of these people were born after Sonic Youth’s amazing record Daydream Nation was released in 1988. But that’s the kind of draw that this band has — creating such indescribable music for so many years, you’re going to reach so many new audiences with every new album. It really makes for an interesting fanbase.

After I waited patiently amongst the crowd, I placed myself close to the “Thurston Moore” side of the stage. The band walked out and then I heard it, although I was unable to believe my ears, my pulse began to race, my heart skipping so many beats I began to shake…yes! Coming at me in a full on sonic assault, it was “Teenage Riot.” The screams of fans around me equaled the volume of the drowned out guitar fuzz and the sound of Kim Gordon’s voice on stage. Everyone was in awe. I’m sure for many the song proved as a starter kit for what it means to love Sonic Youth. As that song and Daydream Nation was for me. Leaving everyone floored in anticipation for their next song, the band never skipped a beat, and launched right into “Reena,” a Kim Gordon vocal track, and the first off the new album, Rather Ripped. What impresses me most about this record is how well it translates live. One of their more recent poppy records, Sonic Youth appears to be paying more attention to their songwriting rather than creating an instrumental atmosphere, which may make this record more appealing to newer fans.

Onstage, the band still has this amazing artistic energy — and Kim, dancing haphazardly (and yet still coming off as energized) along with the music adds a really laid back attitude for the band. Her style and attitude shown through on “Neutral,” another new cut from the album that features Ms. Gordon delivering some trademark icey cool vocals. Though Sonic Youth has been making music for decades now, they never come across as bored or worn out. The latest single, “Incinerate,” was an instant new favorite among the fans who were treated to a slew of new songs from the record, including the Lee Ranaldo track, “Rats.” This mid-set track showed off the band’s amazing ability to be multifaceted, a great dynamic that not many bands today can share. Not only do they write songs in expected musical formation, but they also recreate roles, at times saying “I’m not just a guitarist, but I’m also a songwriter and singer in my own right,” and that’s where Ranaldo’s contribution in this set is really anticipated by the fans. A lot of people in attendance have favorite “Kim songs” or “Lee songs” (this conversation was heard over and over again while waiting outside the venue and between band sets), so regardless of what song is played there will always be a lot of happy fans leaving the venue. “Rats” is a great “Lee” track that, like “Mote” (from Goo) and “Eric’s Trip” (also played at this show, and from Daydream Nation) from earlier albums, really shows off what a talent Ranaldo is (as he is also a fine spoken word artist in his own right).

Opening for the band that night was UK dance rock outfit The Go! Team. Self-proclaimed fans of Sonic Youth, the band worked hard to get the indie kids on their feet. I however, was totally amused by the stone faced grunge rockers standing next to me wearing their Doc Martens, wallet chains and flannel shirts who did not react at all, but all of a sudden came to life once Sonic Youth hit the stage.