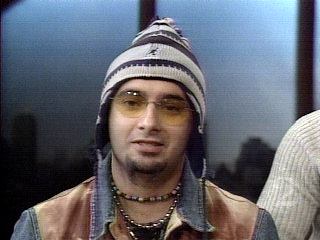 Brief explanatory note for those not living in the NY metropolitan area: On the evening of May 24th, 2001, an in-store appearance was made by Chris Kirkpatrick, the Goblin King himself, to promote the new FuManSkeeto spring line. Following is a dispatch from the front lines.

Before I start, I would just like to say that the following relation of my experience is in no way a reflection on the glorious ladies who accompanied me, who fuckin’ RAWK and were, for me, the best part of the evening.

It all started off very positively. A posse was convened. Multiple courage-building drinks were had. Hilarity ensued.

The moment arrived. We made the long walk to Bloomingdale’s across the street and made our way to the second floor. Whoo! We found it right away! ordons and lights and security and all! And there weren’t even mobs of teenies! Success! On the downside, signs strategically placed next to the merchandise proclaimed we were going to have to buy our autograph with a purchase of FuWear. Hmph.

Then we turned the corner.

Okay, not all that surprising, but it was long-ish, and filled with frighteningly loud, psychotic, highly-Jersey girls, and we were at the end of it.

And the drinks were already starting to wear off.

The screaming began. Apparently, The Boy had arrived. Word filtered back from a scouting mission that Dani was there, too, and that he was signing one item a piece. Also, that the clothing purchase was not being enforced. Thank god. Because they didn’t bring the “I Heart Fu” shirt, and I was feeling bitter. We vowed to get Dani’s autograph, too, since I can imagine no worse feeling in the world than making an appearance to promote your work, your livelihood, and all you can do is sit there numbly while small children scream hysterically and cry over your punk ex-boyfriend, who is sitting next to you.

Anyway. The line moves. We get closer. We fear the people in front of us. And also behind us. I think I was leaning against a pillar, mumbling, “I really don’t think I can do this” while someone rubbed my back reassuringly, for a while there.

Amanda got a semi-coherent phone call.

See, Amanda had given me a Very Important Mission: I was to pimp the popgurls.

So, I had a print-out of “The Great Lucy Debate” all ready for signing, with an extra copy to leave for him should he be interested. Which, of course, he would be. Of course.

I had the patter down – about being one of the editors of a pop culture site with a special affection for The Boys, and would he please just make the signature out to the gurls?

We had reached the front of the line and were being fed in single file. Handlers were everywhere, touching our shoulders, shepherding us quickly through. Repeated announcements were made about having our SINGLE item to be signed OUT and READY TO GO. Pictures would be allowed for those who had cameras. We were all set.

One of our group went. Things blurred. I remember being gestured forward, past the Very Large Black Men flanking the table that had been erected.

Ok. I’m standing in front of Chris Kirkpatrick, and my impression is.

Oddly tan? Like, this strange olive color, that, while not appearing natural, also did not have the scary orange fake tint?

Tired-looking? Bags under his eyes?

He looks, and I find myself surprised by it, exactly like he looks on TV, or the IMAX screen, or in photos.

I put the article down. He signs. He hands it to me. And it’s over.

We four move away. We’re all kind of giddy and after-glowy from the adrenaline. Someone mentions the conversation she had with him. Someone else says she wishes she’d been able to get Dani’s autograph, like we mentioned.

The adrenaline drains away. Um, Dani was there? They had a conversation with him? I did not even SEE Dani. I did not open my mouth for a simple “Hello,” or more importantly,”Thank you.” Couldn’t ask him to sign the article “To the PopGurls.” Didn’t even leave him the extra copy of the article. And it wasn’t like I was overwhelmed by him or something – it was like, I was under this compulsion to facilitate the experience – to make it as quick and painless as possible. I’m left feeling.

Not what you’d expect, right? ot what I expected, either. But I felt like I had somehow failed. It wasn’t that I expected bells, or trumpets, or Chris to jump up and say, “I have found her! The woman who completes me!”

God. I wouldn’t even want that. *shudder*

But all I could think was that these things must be excruciating for them to sit through, and, yes, it’s the price you pay for popstardom, but how do they keep from going crazy? And I should have done something differently.

And on top of all this, um, I wasn’t hot! I mean, I was! But Chris didn’t get the full-on force of my blinding sassiness! I didn’t charm him with my scathing wit! I didn’t even get to pimp the site, yo, so that Chris becomes our new favorite reader!