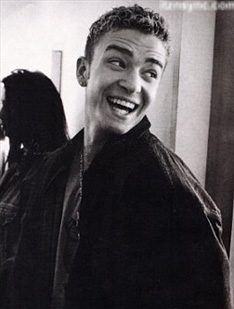 “When you land, you have to go to the Four Seasons Hotel at 200 Boylston from five to six. Someone is having a press conference. Call me at work.”

This is the message I heard from Melynee while waiting at the baggage claim in Boston, after a five-hour flight from the West Coast. I managed to keep my cool until I grabbed my bag, but then I was unable to stop my fingers from dialing. “What’s going on?” I asked eagerly, while trying to convince myself that she had forgotten I was in Boston, thought I was already in New York, and therefore whatever information she had found out while I was in the air wouldn’t really apply. I was wrong.

See, it turns out that Justin Timberlake was in Boston today, speaking at a press conference that has something to do with math. Britney is also involved, I think. I’m fuzzy on the details. And the conference just happened to be occurring a mere two hours after I landed, plenty of time for me to get to the hotel and stake out a position. So, of course, I tried to convince myself and Melynee that I didn’t need to go. I was getting no sympathy from her, even though I explained that, when she went to stalk Chris, she had an entire posse, while I was just one lone sad little PopGurl. Still, I got no love. And before I knew it, I was changing out of my overalls and tennis shoes into something more hip and sassy.

I called Michelle in the shuttle on the way to pick up my rental car, hoping she would talk me out of going. Instead, she giggled and reminisced with me about cute “Making The Video” moments. Bitch. Suddenly I was renting a car and getting directions to the Four Seasons and driving there in very slow traffic and paying 10 bucks to park.

Michelle got another call as I was walking to the hotel. I didn’t have a plan. In the old days, when I was a newspaper reporter, I remember press conferences as being fairly casual affairs. You’d walk in, get some press information, show your credentials and take a seat. I figured this would be different, and dammit, I don’t have credentials anymore! I began to concoct stories about being a freelance writer, all the while talking to Michelle and practically running down the street to get there on time.

And then I was at the hotel. As I walked up to the door, I saw three teenies – maybe sixteen, seventeen – looking dejected and exiting the hotel. I tried to look casual. After all, I’m a business professional and was dressed in something I could pull off at the office. I have an expensive cell phone. I’m cool, non-threatening. Nothing to see here, move along. All the while I’m trying to get Michelle to give me orders because my brain has seized up and I can’t think of anything to do. “Walk in like you belong,” she says. So I do.

I walk right into the lobby, look around as if I’m expecting someone, and then punch the button for the second floor. Where I know the press conference is being held from the release Melynee pulled off PR Newswire earlier today. I walk off the elevator, and hoo boy is it different from other press conferences I’ve attended.

First, there are two police officers and what looks to be two security guards (though not the big, black guys you’re used to seeing with *NSYNC). There is no one else waiting outside – although I did arrive right as it was set to begin – and I looked very suspicious. Second, there didn’t appear to be any information set out for reporters. And finally, I could see through the mostly glass doors of the conference room that everyone inside was wearing a suit. And they call themselves journalists? What? Where are the khaki pants? Anyway, I did the only thing I could think of, which was to sit down and pull out my expensive dayplanner and pretend to take notes. While listening to Michelle be completely unhelpful over the phone.

After watching some guy prep some lucky little kid (“I bet he likes math!” Michelle said) to go accept something from Justin, we decide I need to head back down to the lobby. So I do. The three Dejected Teenies are sitting outside on a bench, while I sit inside talking on my phone.

A group of school kids arrived, and they were very excited. It appears they were special press conference guests. The girls were all squealing about getting to meet Justin. The boys were wondering if he’d have big bodyguards. They were, probably, an average age of nine. I hated them.

I decided that I looked stupid, sitting around the hotel lobby talking on my cell phone (and, also, it was fucking depressing knowing the Infant was, basically, in a room right above me), so I left the hotel and walked to the back, where before I had seen a couple of black sedans and a black Lincoln Navigator. The Navigator had my spidey-senses tingling, because, you know, I pay attention to stuff, and noticed they were being driven around in Navigators to and from the “Pop” video set. So I decided to stake out the car.

Much sitting occurred, and I probably said, “I just want to see his cute little shaved head” and “I just want him to say ‘peanut butter and jelly'” at least a dozen times. Kudos to Michelle for putting up with me.

And then it happened. The Navigator turned down the alley toward the front of the hotel. I followed. And just as I caught up, the driver looked at me, turned around, and went back to his previous spot. Fucker. Faked. Me. Out. I just know it. He thought I looked suspicious, he drew me out and I took the bait. Dammit. Michelle cackled in my ear as I walked past the Dejected Teenies and took up a spot in front of a furniture store. Melynee buzzed in on my other line and I filled her in. She totally believed the driver was psyching me out, too. How horrible.

The teenies were looking at me. They knew something was up, that I wasn’t just some hotel guest wandering around talking on her cell phone. But they did not approach me, nor I them. Instead, I walked back around the building and set up camp about a block away from the Navigator. And talked to Michelle some more.

While I was sitting there, still trying to look non-threatening, the following happened:

And then. The two guys in suits ran toward the front of the hotel and the Navigator followed. I sort of panicked and watched the teenies. Who didn’t seem to be going anyplace. I wondered if I was being faked out again. And then I started walking, as did the Leader. I met her, coming back from the front, and she didn’t look excited about seeing anything. But I kept going, still talking to Michelle, until I was in front of the hotel, leaning against a brick pillar. And there was the Navigator. And there were two of the big-ass bodyguards you see with Justin everywhere he goes. And there was already someone in the back seat. Fuck. One of the bodyguards looked at me and smiled. I whimpered. Michelle demanded to know what was happening.

The Dejected Teenies were suddenly right behind me, and one of them asked if I was here for *NSYNC. I played cool and said, “Oh, absolutely.” And the figure in the back seat shifted and I tried with all my might to see through the darkly tinted glass. “God. I feel 12,” I said out loud. The Leader said, “Yeah, us, too,” to which I replied, “But you’re probably a lot closer to 12 than I am.” “We didn’t think you were an *NSYNC fan,” said the Leader, “but then we noticed you walked by a couple of times.” Busted by the Dejected Teenies. “Yeah,” I said, “You can only walk around the block so many times.” I noticed that one of them had been talking on a cell phone, and told her I felt better for spending all afternoon on the phone with Michelle. The teenie confessed that she had just been pretending to be on the phone. I didn’t ask why, because it’s totally something I would have done, had I not had an actual friend to talk to.

The Navigator pulled up right beside me. The back, driver’s side door was less than five feet away. But the windows were too fucking dark. All you could see was the outline of his cute shaved head and sunglasses. Five feet away, behind a freaking car door. The Navigator started to pull out and the Leader ran to the top of the driveway, looking in through the driver’s open window. “It was him,” she said. “But I could just see his sunglasses.”

Then he was gone. So close, yet so far. Blah.

I felt strangely nauseous after, and wandered back to where the Navigator had been, whining to Michelle all the while. The Leader caught up to me. “I wish we would have known you were here for Justin,” she said, “We could have given you our cell phone number, and we could have split up, watching the front and back. We could have played phone tag.” Michelle laughed in my ear and I smiled at the Leader. We totally could have done that.