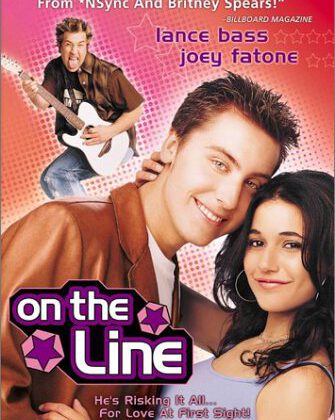 Through our incredible amount of clout in the world of entertainment; the fear and awe in which we are held by the movers and shakers of Hollywood – not to mention the amazing generosity of a friend – Amy and I were able to attend the New York premiere of On the Line, and there’s nothing we’d rather do than share the dirt with you.

Before we get to the movie, however, let’s just talk about the premiere itself for a moment. First off, this being the only premiere I have had the pleasure of attending, to date, I know. Try to contain your shock. I’d like to point out that I have no idea whether the way this one was organized was standard practice or purposely engineered to thwart the teenies. We arrived 45 minutes before the movie was scheduled to begin and were ushered past the screaming horde into the theatre just as they opened the doors for seating.

Now, I have always dreamed of this day; me, fabulously attired, on the arm of some pretty, young boy, strutting my way down the red carpet, while bulbs flash and reporters yell my name. Sadly, this was not to be. In fact, aside from what was lining the floor of the lobby, I saw no red carpet, period. I suppose there could have been one outside, but if so, the girls were so thick I couldn’t even catch a glimpse. There was a press gauntlet lining the inside stairs up to the theatre, but apparently we gurls were not deemed quite well-known enough yet to inspire glee amongst the paparazzi.

We were fortunate enough, however, to be the first people into the theatre – a fact for which my sense of pride is eternally grateful. Contrary to what I had imagined, the celebrities were not seated down front. While their seats, reserved with named cards, were on the main floor of the theatre, it appeared that the bigger your name and better your connection to the movie, the farther back you were seated. We were able to snag seats in the first non-reserved row, and were thus blessedly, mostly removed from the throng of pubescent girls clawing after us. I imagine the seating was arranged this way the better to keep the girls from stampeding, or perhaps to allow the celebs the chance to slink away in embarrassment with fewer eyes upon them.

On the other hand, sitting right in front of the reserved seats meant that when the celebs finally arrived, all the screaming and blinding flashes of hundreds of cameras happened in our faces. In case anyone was worried, while Lance got the biggest applause, JC and Joey had the most vocal fans, and even Lonnie had a cheering section. Also, I am happy to report that we gurls are clearly amateurs at this obsessiveness thing, as we were unable to identify the gentleman signing autographs three rows in front of us until he finally appeared onscreen as the fourth of Lance’s circle of friends, along with Joey and GQ. And for the “People Who Get Way More Than They Deserve” file, the girls seated next to us were the winners on TRL that afternoon. They came with a camera crew. And yes, they were just as hoochie in person as they appeared on TV.

To the grave disappointment of the girls ahead of us, Justin and Chris were not in attendance. Well, ok, the Chris disappointment was all us, but that’s fine! They’re too young for him, anyway! One of the Chicks With Clipboards working the aisle mentioned a scheduling conflict. I’m not convinced, though. Is this the signal of internal strife? Is Justin unable to support a project where he’s not the focus? Was there a lover’s spat? Is this the beginning of the end?! Oh, the hysteria was contagious. Again, this may have been mostly us.

A word of advice to the event planners. Next time, either don’t let the girls in, or warn the director his audience has the attention span of a flea. Poor Eric Bross. I understand that, as he most likely won’t get the chance to do it at the Academy Awards, he wanted the chance to get his thank-yous out there in a public forum. Against a roomful of rabid teen fans, however, he never stood a chance.

And then there was the movie. Yes. The movie. For those of you who’ve seen the trailer, I can confirm for you that the movie isn’t going to be throwing you any wacky plot surprises. Say it with me: Kevin, played by Lance, meets – and loses – the girl of his dreams, on the train. Which prompts him to start a city-wide search for her, involving a series of newspaper articles, and his friends setting up a dating scam. And of course it all ends happily, with an Al Green song. The story’s not new. Or, y’know, innovative. I don’t think anyone is going into it expecting the breaking of new ground, however. This movie will probably do extremely well, though, because it’s perfectly geared to its intended audience of 11-16 year-old girls; Lance and Joey sing, Lance (very briefly) dances, his acting doesn’t suck, he (again, very briefly) appears without a shirt, and he kisses a girl. Ick.

For those of us falling outside this demographic, however, what did the movie have to offer, aside from a plethora of unnecessary, neatly-resolved subplots? Well, Joey sings “Pour Some Sugar On Me” and a slightly altered version of “Every Rose Has Its Thorn.” That’s good. Um. There are a number of lines that are a heck of a lot funnier for those of us who believe Lance has earned the letters “B” and “G” in front of his name. The actress who plays Megan on Felicity has a small supporting role. Of course, it’s a decidedly less interesting role than the one on Felicity. Did I mention Joey singing?

It’s a nice film. It’s family-oriented – down to the truly awful over-dubbing of such inflammatory words as “ass” and “damn.” It’ll do well. Although I hope Lance realizes that the reactions of this audience, heavily-weighted towards the target demo, are not exactly reflective of those of a real test audience. It’s fun to revel in the Boys-taken-out-of-their-native-habitat for a couple of hours. Take the movie for what it is, not what it could have been, and everyone will be happy.

And one that I will, no doubt, be seeing many more times.

You may notice that I have neglected to mention one crucial aspect of the movie, so far. Slash. Let me make one thing clear – this is not because it’s not there. No no no. But the slash is so…omnipresent, that it deserves an article of its own. So stay tuned, folks. You know we won’t let you down.

Final Tally
Boybands Spotted: 1 and 3/5. If you count True Vibe.
Stars Spotted: Depends on whether your definition of “star” includes Johnny Wright and GQ.
Hoochies Spotted: Fewer than expected. Including the TRL girls, five? Eight?