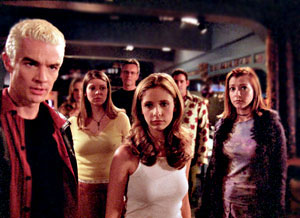 Amy: My relationship with spoilers is a long and sordid one. It started with that blasted magazine that should really be banned from stores everywhere. You know the one – the TV Guide. Oh, it looks all innocent – but what it does is give you a taste. A taste of what’s to come. But it’s too delicious to ignore and you want more and more and more…

Ok, I’m getting off track here. So, TV Guide – I still have the same habits that I had when I was 10. Grab the magazine as soon as it comes in, read through the upcoming descriptions of all my favorite shows and toss it aside. Why I keep the subscription, I have no idea but my mother saves them just in case they have good articles she might want to read later. (Yes, my mother is very odd. But her packrat tendencies come in handy here – I have gone through old issues numerous times to cut out articles and ads for favorite shows. Yes, I’m a geek.)

Anyway, that was just the beginning. I needed something stronger – and FOX was happy to supply. I believe it was the wham-bam combo of Beverly Hills 90201 and Melrose Place that first started the “Stay tuned for scenes from next week’s…” promos. Mmm… my roommates and I would sit around the altar of the television and chant “Scenes! Scenes! Scenes!” over and over again. And, yes, we’d do the all-important dramatic sighing afterward.

Because, you know, Brenda may have been a bitch – but Kelly had no right going after Dylan. None. She needed to be slapped. Hard.

One day, however, lil’ innocent me stumbled across the alt.tv.beverlyhills90210 newsgroup on my lil’ innocent UNIX account. Those evil Canadians got the damn show two days – two days! – earlier than we did in the states and someone would write up a play-by-play of the episode. You have no idea what that did to me. I was obsessed – checking the newsgroup ten times a Tuesday, waiting for the inevitable. Sure it was a quick fix, but it was soooo good.

When I got my first computer, I’d sit around and surf for a while with no real destination. I think it was the summer of 98 that I got into Buffy and would start looking up show info. Recaps, pics… this is when I got into fanfic for the first time. I found a few sites that mentioned what was coming up in new episodes but nothing all that compelling. Eh.

I thought I was over my problem.

Then Fanforum came along. Bastards.

Ohhhh… just imagine a big ol’ drug den with needles hanging off every monitor. Just plug it in and you can find out upcoming plot lines to almost every show. Detailed plot lines. So-and-so’s got a script, so-and-so knows someone, so-and-so was an extra and has the real scoop.

Of course, as with any good drug, there are downfalls. And no, I’m not talking about ‘not being surprised’ like so many spoiler-free people whine. It’s the fake spoilers the bad stuff that’s out there. You feed on it and soak it in, only to find out that it’s all wrong. Let me just tell you that can be a very, very harsh buzzkiller.

Oh, and there are the spoilerboard regulars that have some serious ego-issues. There’s one person who posts the most inane stuff, simply because she needs her ego stroked. “Guess what? The bottles on Max’s desk were Snapple bottles – Moon and Sun. Kinda cool, huh?” Gee, thanks so much for telling me that. Now I’ve led a full life.

What is it about spoilers that are so addicting? Is the instant gratification society that we’re so accustomed to taking over our lives? Why do I need to know about the Buffy finale three months in advance? Why do I need to read those cut scenes from Roswell? Why am I desperate to find out if how Joey’s going to fuck up her relationship with the best guy for her – Pacey?

Hell, I even read spoilers for shows I don’t watch. Like “Felicity” – haven’t seen it since second season, yet I still check out that spoiler board. I’ve even checked out boards for shows I’ve never seen. It’s an ugly addiction – I hold no illusions about that.

I do have to say that I’ve drawn the line somewhere. There is some poster who gets the Roswell wild feed (heh, that always puts the strangest images in my head) late Friday nights. She graciously and painstakingly types out the play-by-play a là my old Canadian friends. I used to read them on Saturdays, a full two-days before I’d get to see the episode. But after a while, I have to admit… I kinda missed the surprise.

So, I decided that I want to know what’s coming up in the big picture, but I’m balking at the insanely detailed descriptions. Because, as much as I need.to.know.now. – I still want a little unexpected in my life.

Perhaps there’s hope for me and my addiction yet.

Michelle: Hello. I am a spoileraholic.

I have a problem. I am aware of this. The boy has made me swear off spoilers, so I tell him I’ve sworn them off, then spend my day surfing the ‘net for them. I am lying to the one I love. I am sick. And I need more.

You think this is easy? Being addicted to something as elusive and fleeting as spoilers? It’s awful, especially near the end of the season, when you need a fix, but pretty much all that’s going to get out has gotten out, and all you can do is sit at your desk and fight off the shakes. And you search and search in vain for something, anything, to placate you.

But it never comes.

How did I become the sad spoiler hound I am today? Hey, spoilers are addictive man, they should come clearly labeled with warnings. I love spoilers. I like to ponder them, to laugh at them, to wonder what form of crack the person was on who clearly made them up – I need them.*

Now, there are those out there in cyberspace who are strongly opposed to spoilers. And more power to them – stay strong, folks, stay strong. They believe it is wrong to know in advance what is going to happen – that it damages the artistic integrity…or something. Is that the argument? I may be confusing my arguments here…that’s possible. Anyway, the gist of it is: Spoilers bad. Ruin show. Bad spoilers, bad. But, see, I don’t think spoilers ruin a show for me, in fact, I think they add to the experience.

Let me explain. Spoilers are very often wrong. Almost always. This depends on the source of course, and there are a few very reliable sites out there, but hey, things change. Sometimes production teams drop spoilers on purpose to throw fans off track – Joss Whedon and Co. are infamous for this – sometimes people get bored and hop on a board and say “Hey, guess what! My sister met this person who works on The West Wing and they said that the President was going to go postal and take out all his staff in the season finale!”, and sometimes people really do get a glimpse of a script, but it’s only draft two of ten. Either way, spoilers are tricky things. And that’s why I love them. I love debating what may or may not happen, what is closer to being real than delusion, and why a certain scenario would never take place, if the producers knew what was good for them. It’s a sport, weeding out the truths from the falsehoods. Not a contact sport, and there aren’t any trophies but, dammit, there should be. This shit’s hard.

If it weren’t for spoilers, I probably would’ve given up on Roswell long ago. The spoilers are so out there, so freaking outlandish, I just have to watch and see how they pull it off. Not that they’ve ever pulled it off successfully, and it’s usually as bad as I fear (case in point: “Viva las Vegas”), but that’s what makes it so fun. Spoilers are fun! They are also informative. If it weren’t for the spoiler boards, I wouldn’t know about random characters and plots that are batted around and then are dropped. I wouldn’t know about the numerous other roads considered for this season, nor would I be able to laugh at the people who latch onto anyone and anything that may have a connection, no matter how tenuous, to the show. Roswell has had an enormous amount of activity behind the scenes, from what the spoiler boards are saying. The amount of rewrites on this show since the middle of first season have been phenomenal. I find it hard to believe anyone could run a show this way, but Katims did say he felt like he couldn’t plan an entire season out – it might ruin the spontaneity of it all.

Say it with me folks: huh?

*note: I am not always right in this assumption. When the spoiler for the Roswell episode “Viva Las Vegas” came out, I howled with laughter. I immediately sent it to Amanda and Amy, who joined in the revelry. The description had Michael and Max going to Vegas to blow $50,000, the rest of the pod squad and human hanger-ons tagging along, and wackiness ensuing. And it all sounded way too outlandish for even those crack-addled minds.

And then it all came true. Well, except for the Liz/Tess being mistaken for hookers bit. And I was kind of sad about that.

Color me speechless. For once.