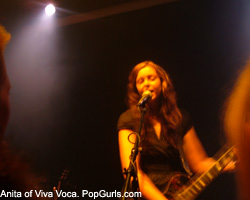 I have a soft spot for bands containing a single female member who is not the lead singer (i.e. a female in a band who plays in instrument and is not a front woman backed up by a bunch of nameless faceless dudes playing music). I also have a soft spot for Indie rock bands, especially the dying breed of Indie bands that are actually signed to an independent label and still believe wholeheartedly in getting into a groove and wordlessly jamming away.

The fact that Silversun Pickups have the combination of these things going for them (with Nikki Monninger providing their bone-tingling bass lines) has made me grab hold of their new album Carnavas with serious force (both hands, kung fu grip).

I worried a bit upon making my way into the sold out Live 105 show, held at the Rickshaw Stop in San Francisco. Thinking I was extremely late, I hurriedly walked past the very kind bouncer and doorperson and into a crowd of maybe 30 people. Turns out the joke was on me and I was there a little early (perfect timing to get a drink before the bartenders got swamped). The crowd grew steadily until the room was nearly packed when the first opening band, The Kingdom (Portland, Or) started up.

The lead singer of five-piece The Kingdom had a very familiar voice, causing me to repeatedly ask my friend “who does he sound like?” What made the task of placing the voice with a name even more difficult was the fact that most of their sings were under two minutes long. By the time I’d kind of start to get into something, it would be over. (I figured it out though: Adam Duritz of the Counting Crows.) Eventually The Kingdom’s energy and witty one-liners – “If you’re half as excited as I am tonight, call a cab right now,” won me over. I’d definitely check them out again.

Viva Voce played next, and I was completely blown away. I’d heard good things and let me say, they live up to their reputation for doing something really interesting in rock music. Lead singer/guitarist Anita Robinson and her husband/drummer/guitarist/ jack-of-all-trades, Kevin Robinson, have killer vocals and a style and that reminded me of all the things I love about Luscious Jackson and The Breeders. They played several tracks off their new album Get Your Blood Sucked Out, during which time the audience did something I rarely see done during an opening bands’ set. They left the bar, came closer to the stage, and all-around rocked out. I actually heard a few “awwwww’s” when Kevin announced that they’d be playing their final song and then the Pickups would be on. That in itself speaks in volumes.

Two things I dig about SSPU’s debut Carnavas are the fact that the music goes from quietly cinematic to rumble-your-insides loud, and the fact that singer Brian Aubert’s voice, perfectly paired with their sound, does the same thing. That said, one of my biggest worries seeing them live was that he wouldn’t be able to pull off the quiet/melodic then suddenly in-your-face-loud vocals he manages so effortlessly on the album. I have witnessed tricky vocals like these attempted live by other bands and it’s not a pretty thing to hear a singer struggling to sound like they do on the album.

Lucky for the sold-out Rickshaw Stop crowd, on the opening night of their tour, Silversun Pickups sounded every bit like they do on the album. The sweat dripping down Aubert’s brown hair only halfway through the first song was evidence of how hard he was working to give fans a taste of what they’d heard on the album. Suddenly the crowd that had seemed so small upon entering the venue had grown to a massive pit of people moving in unison while SSPU got into their grooves and jammed away.

There wasn’t much banter between songs, other than the typical “Thanks, you guys are great” and “We’re psyched to be here” and the occasional guy in the audience yelling “You guys fuckin’ rock” or “Nikki you rock” kind of stuff, but the crowd didn’t seem to mind, because the music did all of the talking for them.

There was a sort of buzzing anticipation that you could almost feel for the band to play their extremely popular first single “Lazy Eye.” Like any good band touring with a new album, Silversun Pickups strung the audience along until nearly the very end (second to last song) when Brian announced “I think I’m drunk…this mic feels good on my face” then giving in and playing their most familiar song, at which point audience members went nuts. (Specifically the guy in the white sweatshirt. Yeah, that was my ribcage you elbowed.)

Unlike a lot of bands, SSPU took requests for their encore, challenging some requests with responses like “We don’t know how to play that one” (Three Seed), but then ultimately giving in and proving exactly the opposite.

The highlight of the evening was at one point (during “Future Foe Senario” I believe), Nikki was having problems with her bass (come on now, that’s not the highlight) and had to briefly leave the stage. Brian announced that they’d jam until she got back and they did exactly that, proving that they know how to rock the crowd into a wordless groove, something few bands these days are capable of doing (thanks to short attention spans and the need for a catchy chorus). Silversun Pickups proved Thursday night that they have something going for them that a lot of bands lack; raw, energetic, talent. (Making me not even the slightest bit sad that I missed my Grey’s Anatomy. Seriously).

PopGurls is proud to announce that this review is part of the Filter Magazine official online tourzine. Check it out, and follow Silversun Pickups throughout their tour!