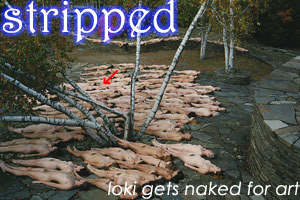 “Do you know Spencer Tunick?”

Seren called to ask me this, and when I told her the name didn’t sound familiar, she continued. “Well, you know those pictures of all the naked people? Like, in New York City and stuff?” Those, I know. She told me that he was going to be up in Woodstock shooting for his “Nude Adrift” series the following day and we should go.

Apparently getting naked was part of Seren’s plan to reclaim her life of sorts. After a breakup of a long-term relationship and finding herself in a deep, unhappy rut, she was looking for new challenges to shake her world in a more hedonistic manner. I kind of laughed at her over the phone and promised to think about it. Not that I didn’t need some shaking up myself and it had been a long time since I’d shown all my bits to random folk. But, while I’m fairly comfortable with myself around friends and such, I didn’t quite think I was up for stripping down with a hundred other people. Even if they’re naked, too.

Later, I mentioned her proposal to my ex-boyfriend. He immediately blurted out that I should do it. “You’re an exhibitionist,” he laughed. Which may be true, but see above again. I may have tried my darndest to seduce him in any public place, but he was my boyfriend. Of five years. The very definition of an unstranger.

I may disagree with my being an overt exhibitionist, but I lay no declarations of being a modest. Well, not when it comes to clothing. When I was in college I had modeled for a bunch of my friends’ art projects. I did a couple of nearly naked school magazine shoots here and there (it’s easy when you’re an editor). There’s a whole slew of pictures from my sophomore year when a few friends (and a few strangers) painted my breasts and my back and my arms. More people have seen me almost completely naked than would be at the Spencer Tunick shoot. I knew this, and yet still balked.

Because while most of those pictures were taken way after I sported a mere 105lbs on my 5’2 frame, they were still a good 30 pounds ago. Luckily for me, as I’ve gained, I’ve managed to maintain the Marilyn Monroe hourglass, although even that’s been up for debate lately. I’ve always been a curvy gurl, just now the curves are falling in places I do not like.

Finally, I gave in and told Seren that I’d make the trip up the next morning and see how I felt about posing once I got there. And once I got there, I really wanted to leave. Because sitting around the stunning grounds on Opus 40, I realized that my fears were embodied right in front of me. Aside from the mothers and fathers, and a few older folk who showed up – almost every woman there was roughly a size four without an ounce of fat on her. Some were so obviously enamored of their naked bodies that they kept stripping down and were told several times by Spencer and the crew to put their clothes back on. Needless to say, I was never scolded. Yes, I stayed.

I have to say, the whole thing could have been far better organized. The sign-in was fine, but the crew left people to sit around for an extra hour or so with no explanation of when they were going to start or what was to come. Spencer Tunick himself wasn’t to be seen until right before we started shooting. For anyone who was nervous (big neon arrow pointing at me), this only made me question my decision more and more.

There wasn’t a huge turnout, more than 50, but definitely less than a 100 – so it was hard to blend in as well as we’d hoped. Opus 40 is a man-made quarry, so laying down on the stone on a chilly September day did not necessarily ease us quickly into a comfort level. Nor did the fact that most of the crew was bundled in winter coats, scarves and gloves. Spencer noted that his sister had been the subject of several shots on artic glaciers, but we were a hard group to impress. (We were cold, damnit! Plus, I really didn’t want to think about my brother taking naked shots of me, no matter where I was.)

The first shoot was on a flat piece of a quarry that overlooked a small valley. Being the first, it was the most nerve wracking, although I must admit that once we were all situated – laying down, yet not touching – there was something serene about being naked, eyes closed, taking in only the sounds from the forest around you. The second was a bit unsettling because, strangely enough, Seren and I became two of Spencer’s favorites – much to the skinny exhibitionists’ chagrin. While some folks stayed on top, the rest walked down and flanked the bottom of the slate drop. Seren and I quickly scurried off to a far-off side in order to get out of the camera’s focus, but Spencer called us out from the back to place us front and center. Lovely. The whole “wanting to blend in and keep out of the camera’s view” plan was failing miserably. Gratefully, he chose Seren to move to the group mere feet from the camera, so in the final copy of the print she’s front and center, and far more visible than I. That seemed fitting since she dragged me into the whole thing.

As we were returning to our stash of clothing – Spencer came up and put his arms around us while yelling to the videographer to film us all together. Why us, I still have no idea. Did he sense our nervousness? Did he like the fact that we weren’t stick figures that were constantly ripping our clothes off in this “look at me! look at me!” way? I still don’t think it was a sexual thing because, well, honestly, I was fairly shocked to learn that he was married – he comes across as a longtime player for the home team. Anyway, thank goodness that scene didn’t show up in the mini-documentary, although some snapshot of the moment did end up as the Nerve.com photo of the day.

(Do you know what it’s like to unexpectedly come across your naked ass on a hugely popular site? Especially when you didn’t even know a photo had been taken? Unlike my college days when I had control of the pics shown across campus, in the hands of thousands of people – here, I have no idea how many people have seen me unclothed while surfing in their office, their bedroom. It’s one thing to pose in a sea of people and expect to be one of the specks in a gallery – I didn’t think a close-up of my dimples was going to be an option!)

The last location was on rocks. Long, cold, yet smooth rocks, then tiny, sharp and pointy rocks. I was not a fan of the tiny, sharp and pointy ones. By now we were all fairly comfortable with the situation and each other, and the last few pictures were of us overlapping – maybe just a foot or an arm, but I was distinctly aware of the warm bodies around me, the soft skin pressing into mine. It was so relaxed, so calm and even somewhat contented. It was almost a little hard to get up when the final shot was called.

In the end, the shoot was less than two hours on a cold, cold day. Two hours of awkwardness that gave way into a sort of comfortability with these people you’d seen in all their glory. Maybe somehow I was supposed to finish up and walk away thinking that my body was just fine the way it is. Walk away thinking that everyone is beautiful and glorious and so am I. Perhaps gain some newfound love for my body and myself. I didn’t. Now, six months down the road, and somehow ten pounds heavier than I was then, nothing’s changed. I still feel uncomfortable in my own skin, and now I’d need to lose a good 40 pounds before I let anyone else take another, even nearly naked picture of me.

Flash forward a few months when I reluctantly picked up my signed prints from the day and watched the mini-documentary a couple of times. Seren and I were a bit surprised at all the different body shapes that we didn’t remember seeing. (We were also surprised at the number of very cute clothed boys and girls that showed up to get prints, as we didn’t recall them either.) Sure, there were still the tiny girls – but somehow I had missed the smiling rubenesque women, the one with the mastectomy scar, the men with ample bellies. Catching a glimpse of myself, I didn’t feel like I stood out as this enormous creature, but rather blended a whole lot better into the background than I thought. But I still didn’t walk away with some newfound adoration for my more-than-curvy self.

Looking over the pictures, I have lost a lot of my regret. I’ve somewhat fallen back into the second stage of the orgy – remembering the fun and fantasticness of it all, telling people what I’ve done with a mischievous wink. But I’ve decided that sometimes people do look better clothed, but not for the obvious, self-conscious reasons. A whole bunch of naked bodies can make for some really remarkable art, but you lose your sense of individuality. (Which is probably why we missed all the really cute boys – they blended too well.) There’s no favorite pair of knee-high boots, no sassy hat, no necklace that you slip on and immediately feel stronger and more beautiful and maybe even happier than you felt the moment before. Getting back to basics is fine, but it’s hard to sparkle when you’re stripped of everything.