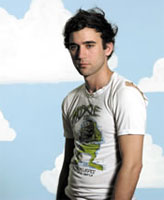 I had never really gotten into Sufjan Stevens. Of course, I hadn’t ever tried that hard, either. However, my friend Keith, who I trust pretty strongly when it comes to music, told me I had to get Stevens’ new album, Illinois. But seeing as how most of Keith’s enthusiasm came from the oddness of the titles, (i.e., the second track, titled “The Black Hawk War, Or, How to Demolish an Entire Civilization and Still Feel Good About Yourself in the Morning, Or, We Apologize for the Inconvenience But You’re Going to Have to Leave Now, Or…”) I didn’t immediately run to find it. That was the wrong thing to do. Because as soon as I did find it, I wanted to listen to nothing else. Constantly bouncing from boisterous and playful to elegant and beautiful, it is one of the more interesting albums I’ve heard in a long time, immediately putting you in a weird and wonderful mind set.

There are very few albums I can listen to without being distracted. This is one of them. And as the album is 22 tracks long, topping out at an hour and 14 minutes, that’s quite a feat. The whole album has a cohesive feel, as if it were the soundtrack for some bizarre movie about Illinois’s strange history and culture. Even the “weaker” songs are still fantastic, and a number of the songs are simply outstanding. “Come On! Feel the Illinoise!” is an incredibly vibrant song, with the instrumentation oftentimes reminding me of Frank Zappa at his best. “John Wayne Gacy, Jr.” – as you can well imagine – is a rather disturbing song, possibly because it’s wrapped in one of the most beautiful and haunting melodies I’ve heard in a long time. Simple piano and acoustic guitar, mixed with Sufjan’s frail and all-too-human voice; the song is both gorgeous and unsettling. Barren and loose, “The Seer’s Tower” is the otherworldly counterpart to “John Wayne Gacy, Jr.”

The track that really convinced me to track down the album was “The Man of Metropolis Steals our Hearts.” Someone had the mp3 up on their blog and I downloaded it out of curiosity. And immediately drove my neighbors insane with my constant replaying of it. Seriously, I had it on a loop for about a week. The simple horns playing complementary lines, the airy choir giving it a feeling of innocence… And when the drums and electric guitar come pounding in for the choruses, I cannot help but feel my body aching to join in.