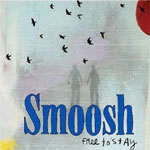 The summer is almost upon us and it’s time to flush out those hibernation tracks on your iPod and fill it with great new music. We’ve reviewed a sampling of gurlie rock bands sure to fit all your summer moods, whether you’re going through a breakup or need something peppy for the drive to the beach.

I had managed to miss all the buzz about Smoosh‘s first album, She Like Electric, so I was a bit hesitant when I got their second, Free to Stay in the mail. Consisting of two sisters, Chloe, 12, on drums and Asya, 14, on keyboards, what kind of music would they play? Is this just a rehash of Kidz Bop? Luckily, I got over myself pretty quickly and just as fast became utterly addicted to Free to Stay. Two full rotations and I found myself craving – seriously craving – songs like “Find a Way” and “Rock Song” again. It’s been a long time since I’ve fallen so hard for a new artist.

A catchy indie-pop album, many of Free to Stay‘s songs seem to be about finding oneself, or at least finding a way to be comfortable in your skin. (I only wish a lyrics sheet came in my advance copy.) And not to harp on their youth, but I’m consistently impressed with how their lyrics, while simplistic at times, are quite universal for listeners of all ages. Like in “Waiting for Something,” the lines I don’t know why I do these things, I always regret them are so haunting and aching the way Asya sings them. You can hear some of their songs on their myspace page.

I’m not sure if I can truly capture my love for this album in words, but I can tell you that I’ve told just about every person in my path for the past two weeks about Smoosh and Free to Stay. This is the music that will give even the most jaded music fan a reason to smile. Every song makes you actually enjoy each moment, each note while eagerly anticipating what’s to come – not only on the CD but what Smoosh will deliver up on following albums. Guarantee yourself a good musical summer – get Free to Stay. Then be sure to catch them when they open for The Eels on tour.

Persephone’s Bees
Notes From The Underworld
Reviewed by: Amanda

The release for this album was recently pushed to August 29, 2006, but I received a promo copy a couple of months ago and it sounds ready for primetime to me. Lead by Russian-born Angelina Moysov, Persephone’s Bees sounds like nothing you’ve ever heard – because the collection of songs on Notes From The Underworld sounds like everything you’ve ever loved. On track number two, the jaunty “Climbing,” Moysov sounds like Tori Amos when the latter is playfully crooning “Leather.” “Nice Day” sounds like Liz Phair put through a 60s go-go filter, while the all-out rocker “Paper Plane” seemingly rides the Brit rock revival led by bands like Jet.

I don’t mean to say that Persephone’s Bees doesn’t bring anything original to the party. On the contrary. They disassemble rock and pop sounds from multiple eras and mash them back together into music that swells, pounds, whispers, seduces and joyfully entices. Check them out on MySpace and give a listen to featured songs from Notes, while you’re waiting for the full release later this summer.

The Ditty Bops
Moon Over The Freeway
Reviewed by: Amy

The first thing I thought of when I popped in The Ditty Bop‘s Moon Over the Freeway was The Triplets of Belleville. Luckily it was just the music and not the film that stayed in mind (which I still hate! Why did they refused to exercise that poor dog!) and I noticed ears perking up whenever I played it. It’s a refreshing change from what you normally hear – an eclectic mix of toe-tapping jazzy swing and snappy folk. Their lyrics are fun and witty, their melodies light and lovely. While listening to Moon Over the Freeway, I wanted to be relaxing with friends on a white veranda, sipping a glass of lemonade slowly on a hot day.

The Ditty Bops are Amanda Barrett and Abby DeWald, a cute lesbian couple who are currently doing a bike/musical tour across the U.S.. They’re quite passionate about biking, which apparent in their adorable pin-up bicycling calendar, which is available on their site. Pop their songs onto your iPod and peddle along, until you need that break for some lemonade.

Jill Sobule produced and co-wrote many of the songs on this sophomore album, and fans of Sobule should definitely take a listen. O’Neil, like Sobule, is a feisty but personal songwriter. Stay, I’ve got lots of channels, she sings on “Stay,” in which she asks a lover to call in sick to work and come back to bed. I bought a piano I can’t play…I lose myself for days in the clothes I don’t put away, she tells us on “Since You Went Away.” On “You’ll Be Sorry,” she threatens her ex with a perfect future life without him – When you’re down I’ll be sure to write, she gloats.

1-800-Bankrupt takes the listener through the lifecycle of a relationship, ending in the mournful “The Sky Is Falling.” In the wrong mood, this album can be tedious. Its love story lacks the passion presented by other songwriters in the same genre (I’m thinking of Lisa Loeb) and O’Neil’s voice can be whiney at times. But there’s something in my gut that says these songs would be amazing in a small club, that O’Neil’s personality would win the day in the end, and that even the ballads would get a little punch if only I could see her face while she performs them.

The Submarines
Declare a New State
Reviewed by: Amanda

Okay. The Submarines aren’t technically girl-rock. Blake Hazard (whose great-grandfather was F. Scott Fitzgerald) shares singing and songwriting duties with her husband John Dragonetti (who scored the Showtime hit series Weeds). The songs on Declare a New State – to be released on June 20, 2006 – were written by Hazard and Dragonetti separately, following the breakup of their four-year relationship – it was the production of the album that led them back together.

And, oh, these songs are so swoony and bittersweet and gorgeous. Clearly written by two people in love and conflicted about it, Declare could easily be the soundtrack to Garden State all by itself. Hazard and Dragonetti both have a dreamy quality to their voices which just makes haunting lyrics like these from “This Conversation” even more goosebump-inducing: I heard a ghost of your voice, long after you had left the room/Couldn’t quite make out the words, but the laugh was unmistakably you/How will I ever get the sound from you out of my head, I guess that I should only be so lucky. With songs like this one, Declare might just be the single best album for wooing back a lost love.