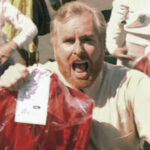 If you honestly and truly don’t know the name "David Fury," you certainly know his words. He penned more than 25 Buffy the Vampire Slayer and Angel scripts (finishing off his reign at both shows as Co-Executive Producer) before heading to Lost. While there, he delivered several episodes - including the brilliant and oft-discussed "Walkabout," where it was revealed that John … END_OF_DOCUMENT_TOKEN_TO_BE_REPLACED