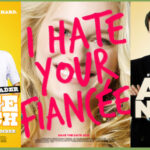 During the Network Upfront announcements, Liz Belsky whipped up some key art in the style of NBC's painfully awkward key art to announce the new fake John Mulaney show Think Fast: SURPRISE! NBC has added a last-minute comedy series to its fall lineup! Think Fast follows a Chicago slacker (John Mulaney) who, after losing his license and his job after a DUI, is forced to move in … END_OF_DOCUMENT_TOKEN_TO_BE_REPLACED