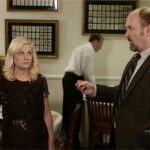 Last night was Parks and Recreation's much-hyped episode in which Dave the Cop aka Leslie Knope's boyfriend from Season Two, played by Louis C.K., returns to Pawnee. NBC had leaked photos in which Leslie (Amy Poehler) was at dinner with Dave and her boyfriend Ben Wyatt (Adam Scott) – so we were expecting funny awkwardness. But "Dave's Return" was as stressful and awkward to … END_OF_DOCUMENT_TOKEN_TO_BE_REPLACED