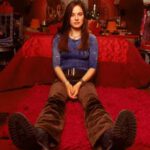 Caroline Dhavernas was first introduced to U.S. television viewers through FOX's short-lived series Wonderfalls, but she's got quite the following in her native Canada ("like Britney Spears," says co-star Katie Finneran, much to Caroline's dismay). While the network cancelled the clever and sharp series after a mere four episodes, that was enough time for many fans to become as … END_OF_DOCUMENT_TOKEN_TO_BE_REPLACED