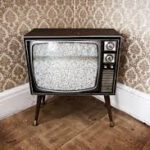 In the wake of an act of domestic terrorism, the crew of the Earth starship Enterprise launches an investigation and discovers that the xenophobic terrorists may have received aid from alien agents on Earth. Who were the aliens and what were they after? So begins the two-part premiere of Star Trek: Enterprise's fifth season, "Damage Control." But wait, wasn't Enterprise … END_OF_DOCUMENT_TOKEN_TO_BE_REPLACED