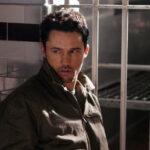 Jeffrey Donovan commands your attention. It's near impossible to take your eyes off him when he's onscreen, which only feeds the intensity that he's brought to his role as Detective David Creegan on USA's Touching Evil. After finishing New York University's Graduate Acting Program, he spent several years on Broadway and off-Broadway stages before heading off to LA for new … END_OF_DOCUMENT_TOKEN_TO_BE_REPLACED