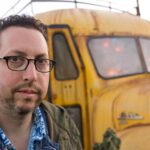 I'm having a really bad day and John Shiban is running late. Putting out fires is just one small part of his job as Executive Producer on The CW's cult hit, Supernatural, and one has to wonder which demon has poked his head in to create havoc. Shiban and mysterious Big Bads go way back. He has a résumé most genre writers would envy. After spending many years in the Chris … END_OF_DOCUMENT_TOKEN_TO_BE_REPLACED