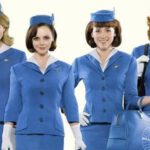 A few weeks into the 2011 television season, a friend told me I had to watch ABC’s Pan Am. This wasn’t in my plans, as I had no interest in the show. From the ad campaign it seemed similar to The Playboy Club on NBC (which had already been cancelled), and I wasn’t interested in television that took the approach of “we can totes be sexist and it’ll be okay because it was NORMAL … END_OF_DOCUMENT_TOKEN_TO_BE_REPLACED