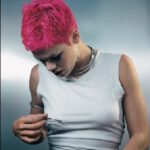 I'm sort of mad at Pink. See, the first time I listened to her new album, M!ssundaztood, I got a distinct early-80s vibe from it. In fact, I felt very strongly that if one were to discover a long-lost John Hughes script that was conveniently the source material for The Thing Called Love, only set in 1985 and starring Rob Lowe as the deadbeat boyfriend of a runaway trying to … END_OF_DOCUMENT_TOKEN_TO_BE_REPLACED