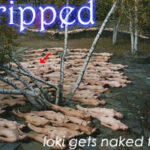 "Do you know Spencer Tunick?" Seren called to ask me this, and when I told her the name didn't sound familiar, she continued. "Well, you know those pictures of all the naked people? Like, in New York City and stuff?" Those, I know. She told me that he was going to be up in Woodstock shooting for his "Nude Adrift" series the following day and we should go. Apparently getting … END_OF_DOCUMENT_TOKEN_TO_BE_REPLACED